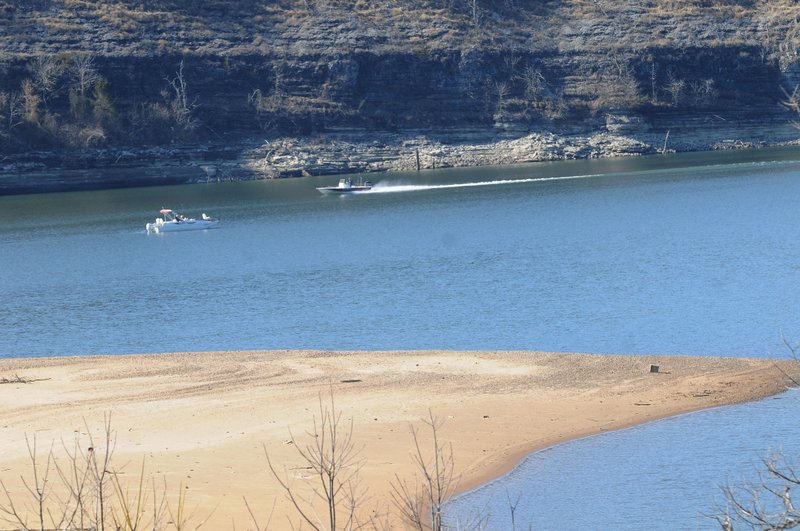 NWA Democrat-Gazette/FLIP PUTTHOFF CRUISING WEATHER Boats cruise Tuesday Feb. 7 2017 past a sandbar on Beaver Lake near Horseshoe Bend Park. Sandbars, gravel bars and islands are surfacing at the reservoir as the water level slowly falls because of a lack of rain.

BENTONVILLE -- The mystery of a human leg found in Beaver Lake in 2001 has been solved.

The Benton County Sheriff's Office said the leg belongs to a Kansas man who drowned almost three decades ago.

Two boaters contacted law enforcement in July 2001 after they saw a human foot floating in the Indian Creek arm of the lake. On the foot was a size 11 tennis shoe that contained the foot and a sock. A tibia and fibula were attached.

The unidentified remains were placed into the National Missing and Unidentified Persons Database, but no matches were found.

Steve Peterson of Kansas drowned on Oct. 21, 1989, and his body was never recovered, according to a story in the Benton County Daily Record. Peterson apparently fell from his boat, which was found circling in the lake with the motor running and no one aboard, according to the story.

Petray found some of Peterson's relatives in Kansas. His 93-year-old mother and 69-year-old sister came to the Sheriff's Office and provided DNA samples for comparison.

A death certificate will be issued for Peterson and the remains will be released back to the family for burial, according to the post.