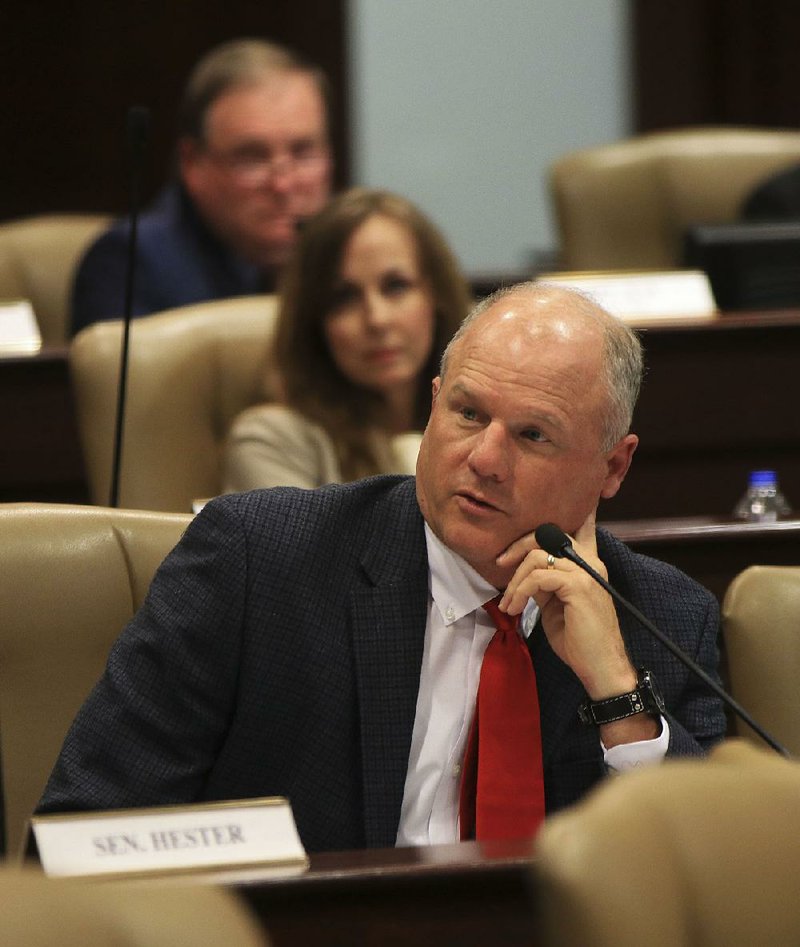 The state Senate on Tuesday approved legislation that would transfer more than $100 million in tobacco settlement funds now in the Arkansas Healthy Century Trust Fund to the state's Long-Term Reserve Fund to use in economic downturns.

Without any debate, the upper chamber voted 26-7 to send Senate Bill 5 by Senate Republican leader Jim Hendren of Sulphur Springs to the House. Earlier in the day, the Joint Budget Committee debated SB5 for about three hours before approving it 33-15.

On Monday, the original version of the legislation fell six votes short of the 29 required for approval in the 56-member committee. The committee Tuesday approved an amendment by Hendren to help the measure win enough support for approval.

A two-thirds vote is required for approval of the bill in the 35-member Senate and 100-member House because it changes Initiated Act 1 of 2000, which is known as the Tobacco Settlement Proceeds Act. The act specified which agencies would administer the funds.

Because of a 1998 settlement agreement with tobacco companies, billions of dollars have been paid to Arkansas and other states. Arkansas has put the money toward health-related programs. A recent news release from Attorney General Leslie Rutledge said the state received its 2017 share of proceeds, about $50.5 million, and that the total amount received since 2001 was $947.3 million.

The initiated act specified that the Healthy Century Trust Fund's beneficiaries would "be the State of Arkansas and its programs, and other projects related to health care services, health education, and health-related research, as such are now in existence or as such may be created in the future."

Gov. Asa Hutchinson on Friday unveiled his proposal to move money from the trust fund to the Long-Term Reserve Fund after he announced his plan to cut the state's $5.3 billion general revenue budget for this fiscal year by $70 million. The Republican governor on Monday urged passage of the trust fund transfer to improve the state's Standard & Poor's Global bond rating of AA/Stable, the second-highest rating behind AAA.

During the budget committee's debate, Sen. Jeremy Hutchinson, R-Little Rock, said, "We have got conspiracy theories with people in the audience calling this the governor's slush fund.

"If the governor wanted a slush fund, it would be in the rainy-day fund," said Sen. Hutchinson, who, like Hendren, is a nephew of Gov. Hutchinson.

"This does not spend any money. It makes it more difficult to access that trust fund money. It simply does what the rating agencies asked us to do so they can give us a better [bond] rating," he said. "If we can ever get back to AAA, that would be a significant accomplishment, and it is done with conservative budgeting."

The Healthy Century Trust Fund's balance as of Tuesday was $102.8 million, and its interest earnings have been periodically tapped by lawmakers over the past 17 years, including $30 million for General Improvement Fund projects in 2013, said Duncan Baird, the state's budget administrator.

The amended version of SB5 would change current law to require a two-thirds vote of either the Legislative Council or the Joint Budget Committee for the state's chief fiscal officer to use funds out of the Long-Term Reserve Fund.

"It was done to try to give folks assurance that there would be a very high threshold ... for accessing these funds," Hendren told the Joint Budget Committee.

The budget committee failed to approve an amendment proposed by Sen. Bryan King, R-Green Forest, to require a two-thirds vote of the full House and Senate during a session on using funds out of the Long-Term Reserve Fund.

Under current state law, the chief fiscal officer, with approval of either the Legislative Council or the Joint Budget Committee, can use the funds out of the Long-Term Reserve Fund to provide an adequate education for public school students or to provide for the effective operation of general-revenue financed programs if he determines that "a revenue shortfall" exists. The shortfall would be when the general revenue forecast is projected to increase by less than 3 percent over the collection in the previous fiscal year because of changes in economic conditions. With the approval of either body, the chief fiscal officer also could use the funds for economic development projects under Amendment 82 to the Arkansas Constitution.

Under state law, the governor also would have to certify that no other funds are available that could be used in lieu of the Long-Term Reserve Fund.

SB5 also would require the chief fiscal officer to replenish the reserve fund by transferring up to 50 percent of the state's surplus money to the fund each fiscal year, Hendren said.

Sen. Linda Chesterfield, D-Little Rock, who voted against SB5, said the Arkansas Healthy Century Trust Fund was created for health care purposes, so she asked Hendren whether using the fund for its original intent was considered.

Hendren said the money in the Long-Term Reserve Fund could also be used for health care programs.

"All we have added is some additional possible [uses of the fund] because in order for it to be a true long-term reserve account, you cannot limit it to one specific category," Hendren said. "The fact is if we have a revenue downturn, the most likely place that will be felt first is in fulfilling our needs to pay our match rate [for the state's Medicaid program] and deliver health care services, which we have no choice but to do."