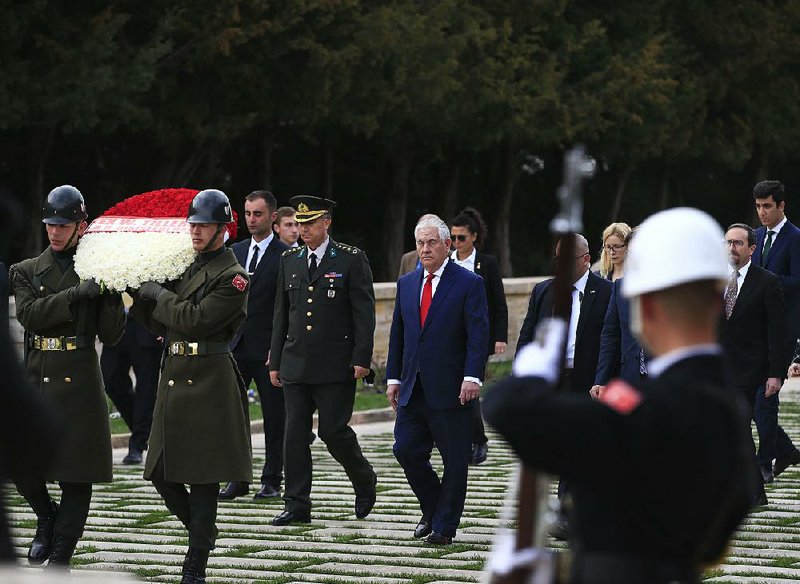 U.S. Secretary of State Rex Tillerson (center) prepares to lay a wreath at the mausoleum of Turkey’s founder, Mustafa Kemal Ataturk, in Ankara on Thursday.

ANKARA, Turkey -- U.S. Secretary of State Rex Tillerson said the U.S. and Turkey face "difficult choices" over the best way to fight the Islamic State, highlighting their disagreements on whether Kurdish forces should play a role in the battle to retake the jihadis' stronghold in Syria.

Tillerson, in the Turkish capital for the day, was seeking to shore up support from a crucial NATO ally in the fight to expel Islamic State militants from Syria and Iraq. The U.S.-led coalition battling the group is backing Kurdish forces as it prepares a campaign against the city of Raqqa. The Turkish government doesn't want the Kurds in the fight, seeing them as an extension of Kurdish militants waging a separatist war in Turkey.

"What we discussed today were options that are available to us," Tillerson said Thursday during a joint news conference with Turkish Foreign Minister Mevlut Cavusoglu, when asked about the participation of Kurdish forces from the People's Protection Units. "They are difficult options, let me be very frank. These are not easy decisions. They are difficult choices that have to be made."

Cavusoglu expressed Turkish displeasure with the U.S. support for the Kurdish forces, saying it had affected ties with President Barack Obama's administration.

"It isn't right to cooperate with a terrorist organization while fighting against another one," he said.

The interaction between the two men at the news briefing reflected the changing contours of the bilateral relationship in the months since Turkey's government suppressed a coup attempt and President Donald Trump won the election. Cavusoglu repeatedly criticized the U.S. with Tillerson standing next to him -- over its support for the Kurds and its refusal to extradite a U.S.-based cleric Turkey says was responsible for the failed coup -- while the top U.S. diplomat emphasized areas of unity.

Turkey is viewed as a critical NATO ally given its strategic geographic position between Europe and Asia, a bridge that has served as an entryway for refugees fleeing violence in Syria. The country has NATO's second-largest military and hosts about 1,500 U.S. military personnel and aircraft -- as well as troops from Italy, Spain and elsewhere -- at Incirlik Air Base, a staging point for the fight against the Islamic State group.

Tillerson made no mention of Turkey's slide toward authoritarianism under President Recep Tayyip Erdogan, or the post-coup attempt crackdown in which more than 100,000 people have been fired from their jobs, suspended or jailed, including prominent journalists, activists and academics. He didn't address the referendum Turks will hold next month on whether to grant Erdogan more powers. In a break from precedent, Tillerson isn't meeting opposition leaders on his trip, and U.S. officials say the top U.S. priority now is fighting the Islamic State.

"I get a sense that the strategy of the U.S. is to try to manage the relationship with a volatile ally, to do our best to contain the fallout from Turkey," said Jonathan Schanzer, senior vice president at Foundation for Defense of Democracies. "There is a difficulty on how exactly to handle something like this because no one's kicking Turkey out of NATO anytime soon."

Erdogan, whom Tillerson met with for about two hours Thursday, has been blunt about his opposition toward U.S. support for Kurdish fighters. Their separatist aims are shared by a militant Kurdish group that has been fighting for autonomy in Turkey's southeast for more than three decades.

Speaking to reporters before the trip, a senior State Department official said an attack on Raqqa must be "militarily viable" though the U.S. was aware of the Turkish government's concerns about American support for the Kurdish fighters. The official spoke on condition of anonymity as part of the ground rules for the call.

Information for this article was contributed by Onur Ant of Bloomberg News.