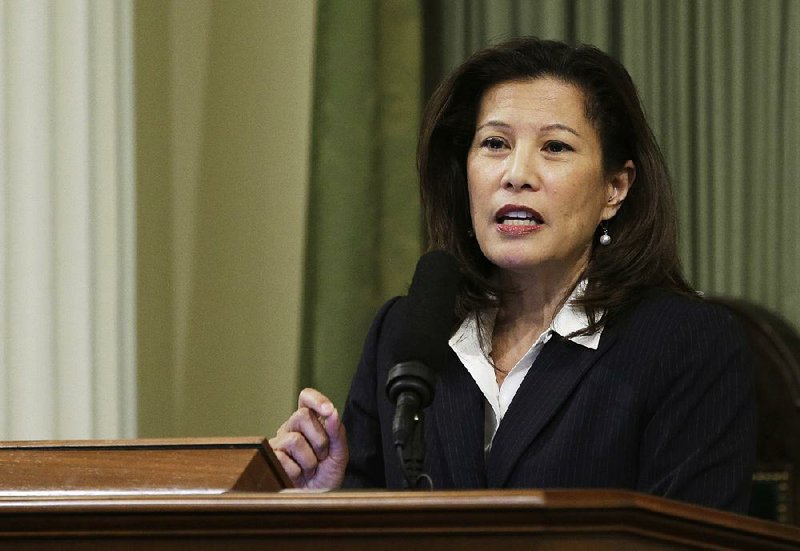 In this March 23, 2015, file photo, California Supreme Court Chief Justice Tani Cantil-Sakauye delivers her State of the Judiciary address before a joint session of the Legislature at the Capitol in Sacramento, Calif.

Tani Cantil-Sakauye, chief justice of the California Supreme Court, is fast emerging as one of the Trump administration's most vocal critics in the judiciary.

Her main concern is the controversy regarding President Donald Trump's immigration policies. Earlier this month, she scolded federal immigration authorities for using courthouses as "bait" to arrest undocumented immigrants. Days later, she assailed the president's disparaging comments about federal judges who ruled against his travel ban.

On Monday, Cantil-Sakauye used her annual State of the Judiciary address to argue that the rule of law was being "challenged" amid the administration's immigration crackdown.

Without mentioning Trump by name, she told the state's lawmakers that "the rule of law means that as a people, we are governed by laws, and not a monarch."

"We are living in a time of civil-rights unrest, eroding trust in our institutions, economic anxiety and unprecedented polarization," she said. "Our values and our rules and laws are being called into question, and all three branches of government and the free press are in the crosshairs."

Cantil-Sakauye, a Republican appointed in 2010 by former governor Arnold Schwarzenegger, has typically used the State of the Judiciary address to discuss budget issues before the Legislature.

But she devoted much of Monday's speech to immigration enforcement under the Trump administration.

She criticized recent raids by immigration authorities that had taken place at or near courthouses, saying they would shake people's trust in the judicial branch. Such incidents have been reported in at least five states, including California.

Cantil-Sakauye warned of far-reaching consequences if the raids continued.

"When we hear of immigration arrests and the fear of immigration arrests in our state courthouses, I am concerned that that kind of information trickles down into the community, the schools, the churches. The families and people will no longer come to court to protect themselves or cooperate or bear witness," Cantil-Sakauye said. "I am afraid that will be the end of justice and communities will be less safe and victimization will continue."

She argued that sweeps by immigration authorities had already created tension between the judicial branch and government agencies. Courthouses, she said, should be treated like hospitals or churches -- places where immigration enforcement is "the exception, not the practice."

Cantil-Sakauye told legislators: "I am not saying, 'Do not enforce the federal law.' I am saying, 'Please don't do so at, or in, California state courthouses.'"

The chief justice's address was the latest in a string of critiques against the Trump administration in recent weeks. In mid-March, she wrote a sharply worded letter to Attorney General Jeff Sessions and Department of Homeland Security Secretary John Kelly condemning reports that federal agents were showing up at courthouses and scouting for immigrants suspected of living in the country illegally.

"I am deeply concerned about reports from some of our trial courts that immigration agents appear to be stalking undocumented immigrants in our courthouses to make arrests," she wrote. "Courthouses should not be used as bait in the necessary enforcement of our country's immigration laws."

Immigration and Customs Enforcement officials have responded that they make arrests at courthouses only after exhausting other options.

Last week, in an interview with KQED radio, Cantil-Sakauye criticized the president for slurring the judiciary. Trump referred to one federal judge who ruled against his travel ban as a "so-called judge" and suggested that the judge had put the country in "peril." He also suggested that an appeals court decision against his ban was politically motivated.

Cantil-Sakauye told KQED that Trump's remarks had offended the judiciary as a whole.

"It's an indication of not treating the three branches as co-equal," she said. "And it's troubling to all of us to hear that because it's an attack on the public confidence and trust and in the judicial branch's rulings."