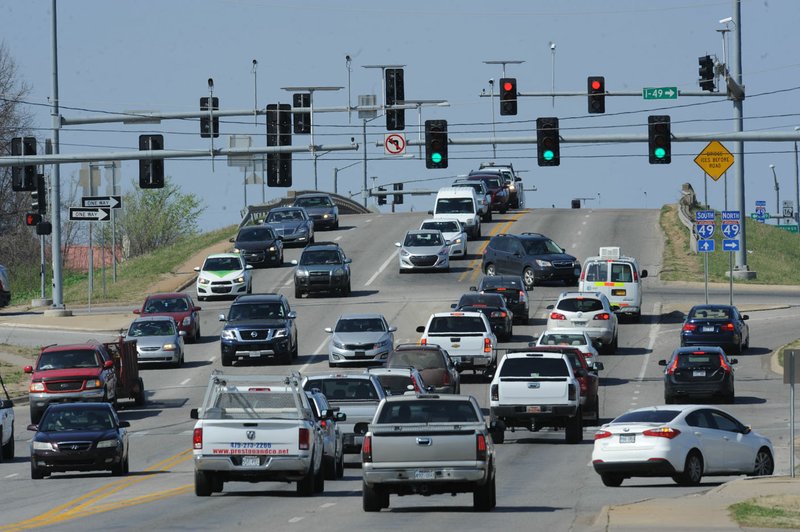 Traffic flows Thursday along Wedington Drive over Interstate 49 in Fayetteville. The Arkansas Highway and Transportation Department is developing a way to improve the intersection.

Northwest Arkansas was the 22nd fastest-growing metropolitan area in the country last year, according to population estimates released today by the U.S. Census Bureau. 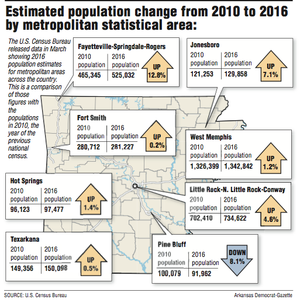 The rankings are based on percentage growth. Northwest Arkansas ranked No. 25 the previous year.

Most of the growth from 2015 to 2016 came from the 6,564 residents who moved to Northwest Arkansas from other states or other parts of Arkansas, according to the new census estimates.

"The majority of our growth comes from people moving in, indicative of the economic opportunities available here," said Mervin Jebaraj, assistant director for the Center for Business and Economic Research at the University of Arkansas. "The major employers recruit strongly from different regions all over the country."

Jebaraj is in line to become the research center's interim director next month. The center frequently reports on economic conditions for the region and state.

Northwest Arkansas' unemployment rate dropped to 2.8 percent in January, the U.S. Bureau of Labor Statistics reported this month. Jebaraj said one way to fill jobs is to bring people in from other areas.

Job growth dropped off in the fall, leading Harvey to worry low unemployment was stifling the region's ability to grow.

The slowdown likely was a pause, he said.

Civic and business leaders across the region are intent on continuing the growth, Harvey said.

"It always seems like they're looking at what's next," he said. "There's a real concerted effort to raise the standard of living here. The people are a byproduct."

The Villages is a retirement community west of Orlando whose metropolitan area includes all of Sumter County, Fla. This was the fourth year in a row The Villages ranked No. 1 in percentage population growth. Its 2016 population was estimated at 123,996.

Two metropolitan areas in Texas -- Dallas and Houston -- had the largest numerical increases in population, according to the Census Bureau. Each grew by more than 100,000 between 2015 and 2016.

Four metro areas were among both the 25 fastest growing and the 25 largest numeric gaining between 2015 and 2016: Austin, Texas; Raleigh, N.C.; Orlando, Fla.; and Las Vegas. For all four areas, net domestic migration was a larger component of change than either net international migration or natural increase, according to a news release from the Census Bureau.

Seven of Arkansas' eight metropolitan areas grew in population from 2015 to 2016, but not as much as Northwest Arkansas.

"In the past five to eight years, we've put a plan in place -- a structure that focused on safety, jobs, highways and quality of life," said Jonesboro Mayor Harold Perrin. "One of the biggest factors in our growth is the medical community. We are currently experiencing more than $1 billion in medical expansion, and we are one year into the medical school program at Arkansas State University."

Benton County had the largest percentage increase in Arkansas, adding 7,440 -- or 3 percent -- to its population and bringing the total to 258,291.

"Bentonville and Northwest Arkansas in general is a place where people have a reasonable chance of success if they're willing to work hard and they come with certain skill sets," said Troy Galloway, Bentonville's director of community and economic development.

Benton and Washington counties ranked first and second in numerical growth as they have for at least six years. Washington County added 3,816 residents in 2016.

Crawford and Madison counties also are in the top 10 for numerical growth, both with greater population growth than Pulaski County.

Madison County's population increase of 355 -- or 2.3 percent -- ranked it No. 2 in the state in percentage increase.

"That's news to me," he said Wednesday. "Right off the top of my head, I can't visually see that. It's a quandary to me. I don't know where they came up with numbers like that."