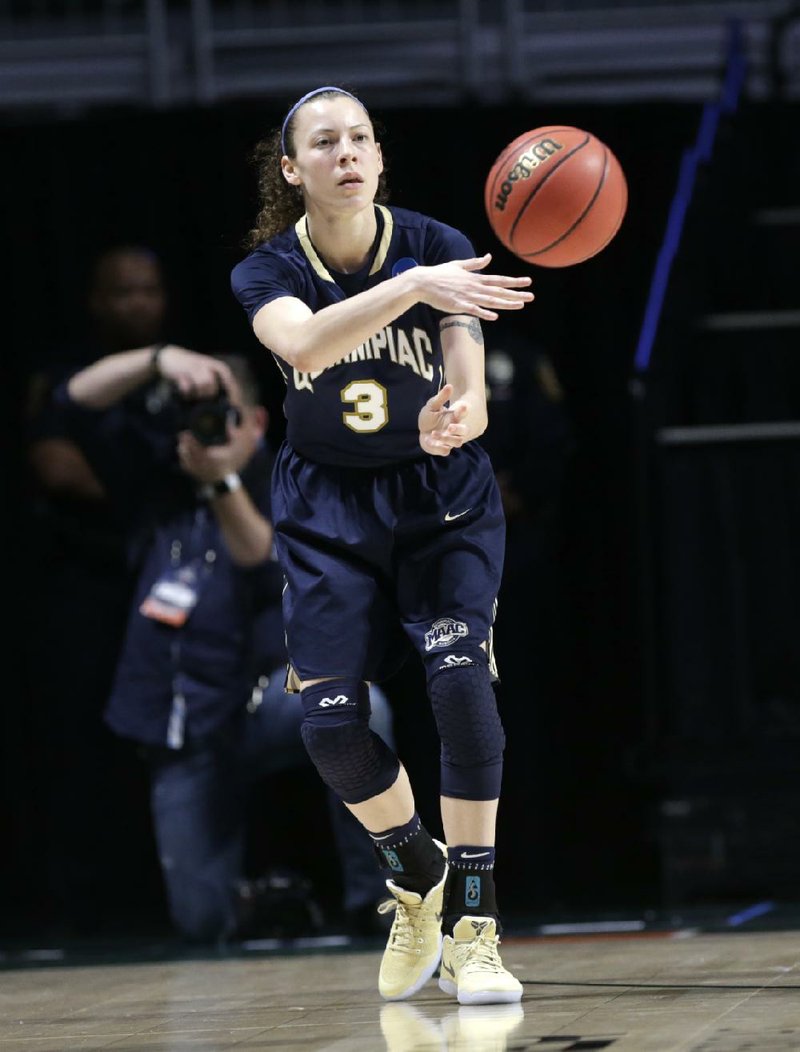 Quinnipiac guard Adily Martucci helped the Bobcats beat Miami 85-78 on Monday to become the fourth No. 12 seed to reach a regional semifinal in the NCAA Women’s Basketball Tournament.

HAMDEN, Conn. -- The first thing folks at Quinnipiac want you to know is how to say the school's name.

Despite what you might have heard on television, It's KWIHN'-ih-pee-ak, not kwihn-uh-PEE'-ak.

"Quinnipiac doesn't roll off your tongue initially," Coach Tricia Fabbri said Tuesday. "But, when you practice it, you get used to it. The more we keep winning, the easier it will be to say."

Fabbri and her players have made a name for themselves by upsetting Marquette and Miami in the first two rounds of the NCAA Tournament, becoming the fourth No. 12 seed in women's college basketball to reach the Sweet 16.

The school's profile has been steadily rising over the past 30 years as it has grown from a small liberal arts college in southern Connecticut to a 10,000-student institution with three campuses. It has become nationally known for its political polling and its hockey teams, which have been to two Frozen Fours and an NCAA title game in 2013.

The women's basketball team has had some previous success, with two 30-victory seasons and three trips to the NCAA Tournament in the past five years.

But senior guard Adily Martucci said this year's players felt they needed to accomplish more than that to earn the program some respect and, yes, name recognition.

"We had to win and make it to the Sweet 16," she said. "We made that our goal. Now that we've done it, the support has been tremendous, the recognition has been great and we want to get even more of that."

So does the student body, which has been following the Bobcats' run with increasing enthusiasm.

"When I say I go to Quinnipiac, people don't know where it is or even what I'm saying," said Megan Rose, a freshman from Silverthorne, Colo. "But when the hockey got big, we got on the national radar, and now it's getting even more out there."

There will be a rally on campus today to send the Bobcats off to the Stockton Regional in California, where they will face top-seeded South Carolina on Saturday. The rally is expected to include an appearance by the local fire department.

Fabbri, you see, is big into metaphors. The coach brought a boxing bell to the Metro Atlantic Athletic Conference Tournament, ringing it after every round. The bell was joined by a stepladder in the locker room in Miami. That symbolized the two steps the Bobcats needed to take to reach their goal of the Sweet 16.

"I told the Hamden Fire Department, I'm going to get them to give us a hook and ladder over there for all the additional steps Trish is going to make," he said. "I would say she has now put Quinnipiac on a level with some of the best women's basketball programs in the nation. And we're still climbing."