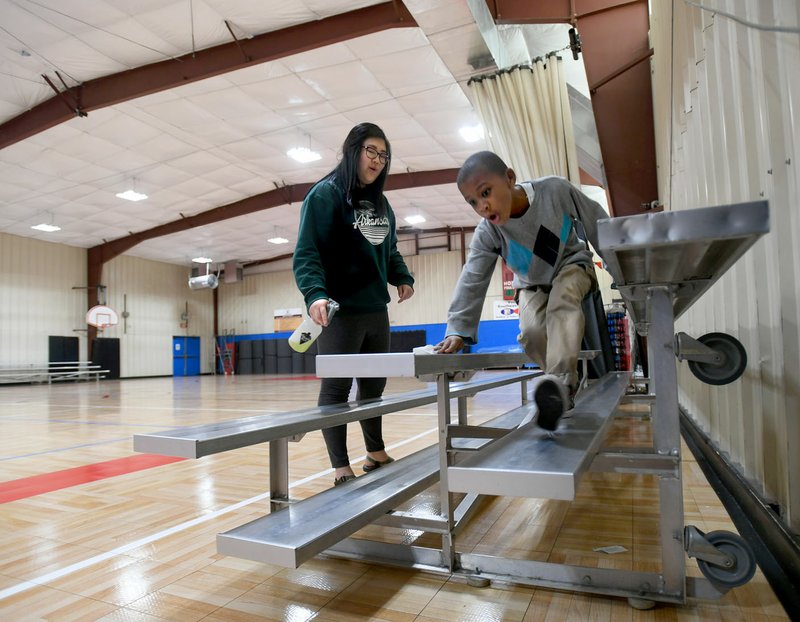 Ellis Stevenson (right), 6, helps volunteer Cindy Mao Friday as they clean the bleachers in the Yvonne Richardson Community Center in Fayetteville. City staff completed a lighting and insulation upgrade for the center in 2015 that included LED lighting inside the gymnasium as well as an LED lighting upgrade in gym that replaced 400-watt lights with brighter and more efficient 100-watt lights. The project was figured to have a 6-year pay back term.

FAYETTEVILLE -- A call to action from residents, initiatives on the federal level to roll back environmental protections and a coal-heavy energy grid have prompted the city to develop a road map to higher energy efficiency.

A city survey released Wednesday revealed 78 percent of about 1,400 residents agreed the city should make renewable energy and energy-efficiency policies and programs a priority. Additionally, 62 percent wanted the city to take on climate-change preparedness.

STAR Communities outlines objectives to achieve goals in energy efficiency and sustainability. Fayetteville has used this framework as the basis for its Energy Action Plan.

• Energy efficiency — Minimize energy use and demand in the residential, commercial and industrial sectors as a means to increase efficiency in the community.

To learn more about the city’s Energy Action Plan, go to: bit.ly/fayenergyplan

Fayetteville became the first city in the state to adopt Property Assessed Clean Energy financing in 2014. The national program pays to retrofit homes and businesses with energy-efficient doors and windows and installs solar panels and other measures. The homeowner pays back the loan, which ends up being less than the combined savings in utility bills over a maximum window of 20 years.

The city revved up its environmental efforts in 2009 with the adoption of an energy code that set benchmarks for energy efficiency in buildings. The new plan will review those benchmarks and set goals to become less dependent on fossil fuels, Nierengarten said.

What the plan might entail or what regulations, if any, could be imposed is part of the ongoing discussions, Nierengarten said. The intention is to guide policy-making.

"We're not going to propose regulations that don't make sense from an economic perspective," he said.

The city has tried to become a leader in sustainability efforts for the region, especially considering anticipated actions at the federal level, Nierengarten said. The Washington Post reported Tuesday that President Donald Trump plans to sign an executive order rolling back several environmental initiatives enacted under former President Barack Obama's administration, including regulations restricting carbon emissions from power plants and how climate change factors into federal decision-making. As of Friday Trump had not yet signed the order.

Mayor Lioneld Jordan and about 70 other mayors of American cities signed a letter in November to then president-elect Trump asking for support and partnership in tackling the climate crisis. The city will continue to make its voice known with another letter if Trump follows through on executive actions to gut the federal Clean Power Plan or pull out of the Paris Agreement, a United Nations accord signed in 2016 to curb greenhouse gas emissions.

The city hopes to make a positive environmental impact even if it doesn't have backing from the federal government, Nierengarten said.

Nierengarten also represents the city on the University of Arkansas Sustainability Council. The university established its own Climate Action Plan in 2009, which got a revision in 2014 and is about to get another, said Eric Boles, UA sustainability director.

The university has set a goal to return to 1990 level of carbon emissions at 125,000 metric tons of carbon dioxide equivalent. Right now, the university sits at 128,000 and should hit the goal by the end of this year or early next year, about three years ahead of schedule, Boles said.

Several initiatives have contributed to the rapid decline in carbon emissions, the biggest of which has been the university's combined heat and power system that runs on natural gas, which went online last year, he said. A six-mile pipeline connecting campus to a network of natural gas lines near Farmington has provided a cleaner alternative to coal-fueled electricity.

The natural gas system is twice as carbon-efficient as electricity, although natural gas is by no means perfect, Boles said. Natural gas is, after all, a fossil fuel, but diversifying fuel sources helps diminish the environmental impact greatly, he said.

"Even wind and solar have consequences, absolutely. There's death counts related to those as well," Boles said. "There's no free lunch; it's all about choosing the options that have the least amount of harm."

The entire region has a heavily coal-fueled power grid. The southern portion of the Southwest Power Pool ranks among the dirtiest in the nation as far as carbon emissions, largely because of its reliance on coal, according to Sightlines, a company that helps universities manage investments.

The Turk power plant, a coal-fueled station which began operation in 2012, has state-of-the art technology to use less coal and produce fewer emissions, according to SWEPCO's website.

The plan is to increase SWEPCO's wind and solar energy generation by about 30 percent over 20 years and drop coal capacity from 46 percent of its production to 35 percent. The projections were submitted in 2015 to the Arkansas Public Service Commission as SWEPCO's Integrated Resource Plan.

Fayetteville has developed relationships with several organizations, including CLEAResult, an organization that manages energy-efficiency programs for local utility companies in the United States and Canada, which has an office in Fayetteville, Nierengarten said.

Other cities in Northwest Arkansas have joined in the effort.

Rogers has used grants to improve City Hall, the library, the airport, Rogers Historical Museum and the recycling center. A Department of Energy grant helped replace the lighting and heating, ventilation and air-conditioning units at the library in 2010. Last year, the city made energy-efficient upgrades to the lighting at City Hall with a General Improvement Fund grant. The runway and taxiway lighting at the Rogers Airport has gone from continuous operation at night to a part-time, pilot-controlled LED system, said Ben Cline, Rogers spokesman.

The city is looking at an energy audit at all of its facilities. Such an audit of the recycling center resulted in plans to convert the parking lot lights to LED, he said.

Bentonville, which operates its own electric utility, has been offering residents free energy audits for about eight years, said Travis Matlock, engineering director. A building inspector will go to the house and point out inefficiencies.

Fayetteville will base its plan on guidelines set by STAR Communities, a national nonprofit group that helps evaluate, improve and rates municipalities on their environmental efforts. Only a handful of 5-star communities exist, Seattle and Baltimore among them. Fayetteville received a 3-star rating.

Northampton, Mass., became the first 5-star community in 2014. Wayne Fieden, Northampton's sustainability director, said the city of about 30,000 took a broad approach. Other cities may excel in certain areas, but Northampton prides itself on doing well across the spectrum, he said.

Northampton started with its own operations, making investments that led to savings in taxpayer dollars, Fieden said. Things like setting up a concierge program to help home and business owners become more sustainability-minded went a long way in a relatively small city, he said.

Fayetteville wants to take a similar approach. Convincing building owners they could save a lot more on utility bills by voluntarily installing solar panels, for example, would have a greater effect than forcing such measures through regulation, Nierengarten said.

During a retreat early this month, Jordan and the council set a goal for the city to become far less dependent on fossil fuels by 2050. Jordan said he didn't know what that might look like because no one knows what advancements in technology might exist decades from now, but he has confidence in his sustainability staff to put the city on the right path.