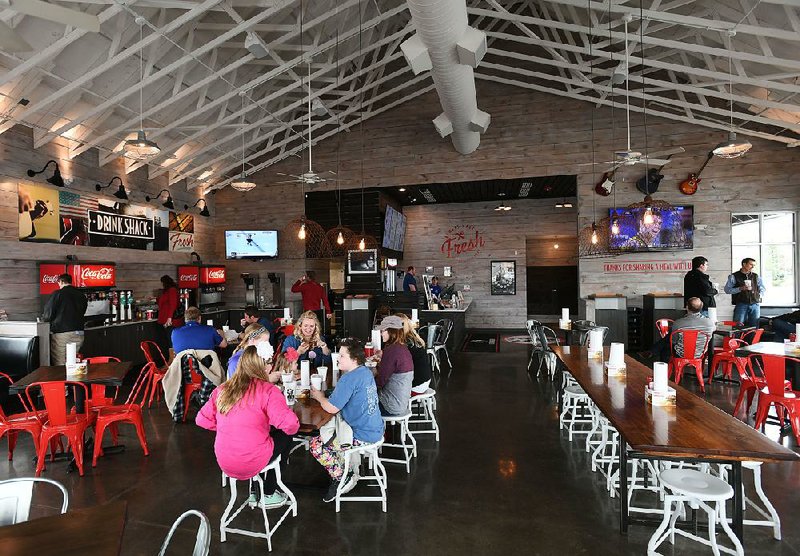 Fayetteville-based Slim Chickens is continuing its growth strategy, opening its 51st operation in the United States and gearing up to start serving chicken at its first restaurant in the Saudi Arabia peninsula in May. 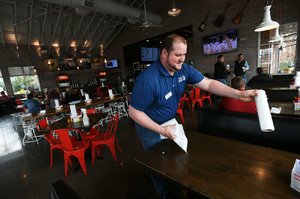 Photo by Andy Shupe
Eric Burns, a general manager in training, cleans a booth at Slim Chickens in Fayetteville. The Arkansas-based restaurant is about to expand into the Saudi Arabian peninsula.

Chief Executive Officer Tom Gordon said 2017 is shaping up to be the company's biggest year yet and that he expects there will be more than 70 Slim Chickens restaurants open worldwide by the end of 2017, with annual revenue predicted to be more than $100 million.

"We're opening up on a few more fronts," Gordon said.

Slim Chickens restaurants have popped up around the United States, with the majority of its locations in the South. It has 19 locations in Texas; 13 in Arkansas; seven in Oklahoma; three in Missouri; two each in Nebraska, Kansas and Illinois; and has one location in the states of Louisiana, Tennessee and Arizona. Of the total, 22 locations are owned by Slims and 29 are franchises.

Slim Chickens competes in the fast-casual segment, where restaurants provide an enhanced dining experience compared with fast-food operations. While fast-casual restaurants don't have a wait staff, servers generally hand customers their food. Part of the package is a comfortable atmosphere, usually including music, big-screen TVs and catchy graphics.

The company was founded in 2003 and is privately owned.

Earlier this year, Slim Chickens struck a deal with Alghanim Industries to open restaurants in the Middle East and North Africa. The companies have entered into a master franchise agreement allowing Kuwait-based Alghanim to open Slim Chickens-branded restaurants across the region. Plans call for the first location to be opened in Kuwait in May, followed by a roll-out across the region.

Arturs T. Kalnins, assistant professor of business strategy at the Cornell School of Hotel Administration, studies franchises, including those in the food industry. He said master franchise agreements are good ways for U.S. companies to expand their brand abroad and that recently, smaller chains have been signing deals with entities overseas.

"This deal sounds promising," he said.

Typically with a master franchise agreement there's not a lot of long-term responsibility placed on the franchiser, Kalnins said. Usually the franchiser visits the company overseas, helps with initial training and makes sure the stores have the proper look and atmosphere.

"After that stage they can pretty much sit back and collect royalties," he said.

Kalnins said that despite perceived tensions, U.S. franchise businesses have seen success with roll-outs in the Middle East over the last 20 years or so. He said a key factor for success is striking a deal with an established company with influence in the region.

Privately owned Alghanim runs more than 30 businesses in 40 countries. The firm has partnered with U.S. companies including General Motors, Ford, Mars, Whirlpool and American Express. In the food and beverage segment, Alghanim acquired Costa Coffee Kuwait in 2013 and development rights for Wendy's Middle East in late 2015.

Franchise restaurants in the United States are expected to see big gains in 2017, according to the Franchise Business Economic Outlook for 2017. The report was prepared for the International Franchise Association by IHS Economics, an analysis and forecasting firm.

The outlook for the quick-service and table/full-service segments is strong, according to the report. They rank first and second in employment growth across the 10 categories highlighted in the report, with 4 percent and 3.9 percent growth, respectively. Both segments saw sales growth slow from 8 percent to 9 percent in 2015 to just over 6 percent for 2016. The report predicts sales growth for 2017 to match last year's numbers.

Gordon said the company's restaurants in Kuwait will be similar to those in the United States, with only minor differences. Stores won't have a drive-up window, since those sort of orders are less common, and they will offer delivery.

He said he has visited Kuwait twice in recent months and that he's happy with the progress of the company's first location there. Gordon said the majority of the chicken and other items for the operation will be locally sourced and that he's confident the quality of the food and service will be up to Slim Chickens' standards when he visits for the restaurant's opening in May.

"I'm looking forward to going back," he said.