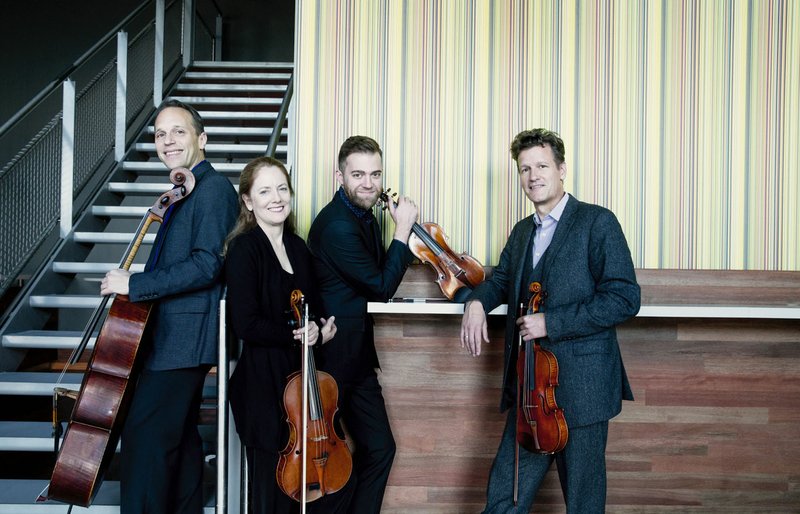 Christopher Costanza is the only cellist in the St. Lawrence String Quartet. But that’s a role he’s used to playing.

Christopher Costanza has no idea why he plays the cello.

BONUS — Selected members from the Arkansas Philharmonic Youth Orchestra have been invited to accompany the quartet on stage for a special work by Felix Mendelssohn.

He knows how he came to play the cello, though.

Costanza "grew up in a musical house" in Utica, in central New York state, where he studied piano with his father from the time he was 6 years old. When he was 8, the director of the school's music program for strings and wind instruments paid him a visit and asked him what he wanted to play.

"I just said 'cello,' and I don't really know why," says Costanza, who has been cellist for the St. Lawrence String Quartet for 14 years. "There was no tradition in the family, no nudge from anyone in the family. But I took to it pretty solidly."

His parents noticed, he says, and soon his dad was driving him to "serious lessons" every Saturday at the Eastman School of Music, two and a half hours away in Rochester, N.Y. He says it was the highlight of his week from the age of 11 on -- and he hurries to confirm he's serious.

"It was a lot of fun to go off to the big city of Rochester," he says. "Mom would often come too, and eventually two of my sisters were joining me, then one more sister went after I had gone off to college. I was the oldest of six, and four of six of us went to the Eastman School for lessons!

"Anyway, we had a big station wagon, and we'd all pile in for an adventure," Costanza continues. "We'd bring a picnic with us or plan to stop at our favorite grocery store. We'd go to our favorite music store to buy sheet music or recordings, and we'd listen to cassettes in the car -- I got to know so much music on those car rides! There were interesting museums in Rochester, a planetarium, the George Eastman Museum... Whenever possible we made an adventure of it. It was a big sort of family trek.

"My parents were incredibly supportive," he adds. Asked if they ever encouraged football or some other more traditionally male pastime, he says no. "We weren't a sports oriented family, even in terms of being sports fans. I think they would have been supportive of just about anything. But music was a natural. Certainly, my father understood."

Through high school, Costanza came home and practiced the piano, the cello and the bassoon, which he added at the age of 9 so he could play a wind instrument. "I wasn't super social as a kid," he admits. As winner of the Young Concert Artists International Auditions and recipient of a prestigious Solo Recitalists Grant from the National Endowment for the Arts, as a young adult, his direction was set toward playing alone or with a chamber group -- and it's taken him from Canada to Colombia to Germany, Australia, Romania and China, to name just a few. A graduate of the New England Conservatory of Music in Boston, he joined the St. Lawrence String Quartet in 2003.

Although he says he "just didn't pursue the orchestra thing," Constanza adds that "my guess is that based on the creative control I like to have over what I do, I am better suited to the chamber and solo life." The St. Lawrence String Quartet is "the perfect type of democracy," he adds, with decisions made as a group or by turns based on proficiency. He, for example, has always been the liaison with management and the "primary communicator" -- which is how he ends up doing interviews.

That's fine with him. So is being the lone cellist even now. Both his wife and his daughter play the violin.