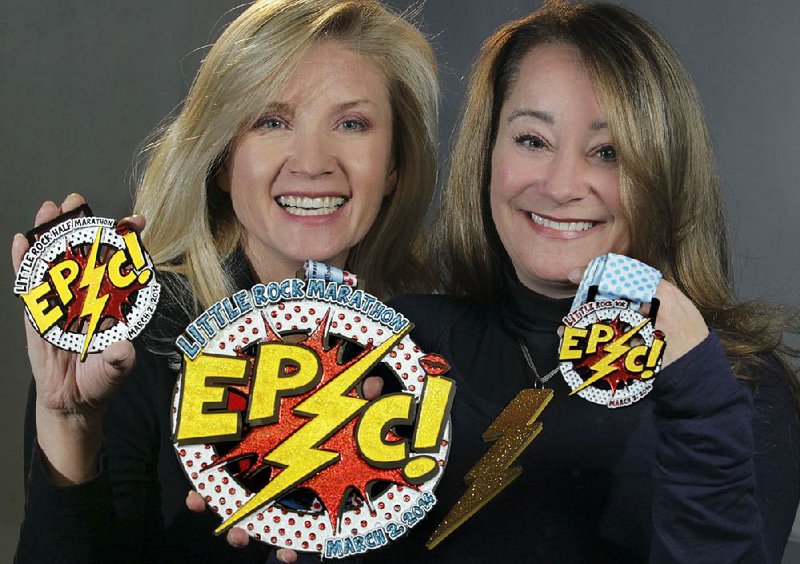 Little Rock Marathon race directors Geneva Lamm (left) and Gina Marchese Pharis show off the large medals used by the race in 2014. Lamm and Pharis try to come up with a theme each year and use memorable medals for finishers.

The familiar scramble in the final few days of preparation for the Little Rock Marathon was on full display Wednesday. 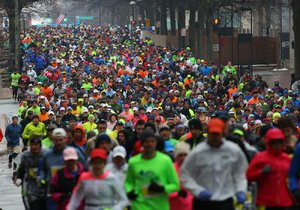 Photo by Stephen B. Thornton
In 2015, runners traversed a more extensive back-and-forth course through downtown. They started in Little Rock, finished in Little Rock, and for the first and only time never left Little Rock because of construction preparation on the Broadway Bridge. 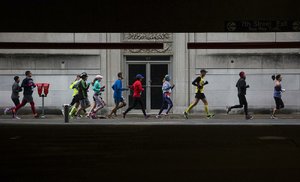 Photo by Democrat-Gazette file photo
Runners file down Seventh Street during the 2015 running of the Little Rock Marathon. That was the year when the course zigzagged through downtown to compensate for not being able to cross into North Little Rock on the Broadway Bridge. 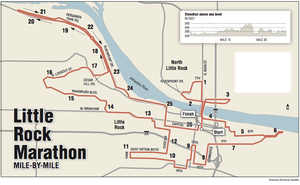 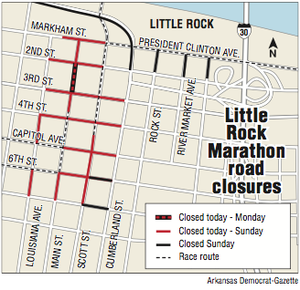 Executive directors Geneva Lamm and Gina Marchese Pharis and operations and security specialist Mike Garrity were at their multiple, scattered stations throughout the morning and afternoon, each geared to render from the chaos around them several smooth, seamless foot races.

The 15th Little Rock Marathon is scheduled to start in downtown Little Rock on Sunday at 7 a.m. Wheelchair entrants will start two minutes earlier. Half-marathon entrants are also scheduled for a 7 a.m. start. A 5K, 10K, and kids marathon are set for today. A total of 11,800 runners and walkers are entered in the five sold-out events, including 2,500 in the marathon.

Lamm and Pharis founded the race in 2003 and first began to develop specific themes for their races in 2006, when they declared that the Little Rock Marathon was Big and Bodacious. This year's theme is Runalicious, and race shirts, posters, advertisements, and banners include the rainbow-like colors of hard candy and a large pink gummy bear.

Lamm sat in her dimly-lighted, windowless office in the basement of Little Rock City Hall. She said their process for theme development has included a mixture of thorough research and simple whim.

"When we look at what our themes will be, we try to look at what the trends are going to be for the coming year," she said. "There is some science to it. We do have some things we actually do and look for. It's not all just willy-nilly."

Focusing on all of life's fun things, in this case represented in part by candy and its many colors, is the theme Lamm and Pharis came up with this year.

"We just wanted something to do with fun," Lamm said. "I mean, we're not going to just have big piles of candy around. It's kind of like the iconic images of youth and happiness. It's those things in your mind that are going to make you happy. It's about those things that make you want to do something. You know, it's the lure of fun things. People want to run for more things than just losing weight and being healthy."

Pharis remembered one theme idea that was rejected by higher Little Rock authorities.

"Marathoners Gone Wild didn't go over too big with city government," she said. "That was 2009. We changed it to It's Big. The Little Rock Zoo was doing Animals Gone Wild, so we thought we could get away with it, but it was a little bit too risque at the time, so we changed to It's Big and went with a circus theme."

Garrity stood in a parking lot south of Capitol Ave., between Cumberland St. and Scott, near the downtown Central Arkansas Transit station. City contractors unloaded orange barrels into a large section of asphalt fenced in earlier that morning. One of the workers apologized to Garrity about the quality of the barrels. Several were nearly collapsed from longtime wear and tear.

"We're going to take these back," he said. "We always want to send our best for the Little Rock Marathon."

Another contractor deposited six scissor lifts into the newly fenced area and parked them beside some of the barrels, 20 or more concrete anchors, and two forklifts.

Garrity, UALR's sports information director in the 1990s and early 2000s, said his current job required that he have a forklift license.

"That's one of the first things they told me," he said.

He said that among his significant duties on marathon race day was to move the numerous pieces of equipment required at both the race start on Scott, and the finish line two blocks away on Main Street.

Of all the changes from year to year, this year the marathon course itself is not one of them. Pharis said she could not remember another Little Rock Marathon course that had not required at least a minor adjustment from the year before. She said several factors might lead to changes in the future, including the reopening of the Broadway Bridge between Little Rock and North Little Rock on Thursday, but said she was not yet concerned with those possibilities.

"Right now, we're just trying to get ready for this year," Lamm said. "And we all really like the course."

Marathon at a glance

NOTEWORTHY There is an 8-hour time limit (7 a.m.-3 p.m.). ... The course is USATF-certified and the race is a qualifer for the Boston Marathon. ... All finishers receive the Little Rock Marathon's large medal, electronic finisher's certificate (available online mid-April. ... Post-race celebration at the Athlete's Village at the Statehouse Convention Center.