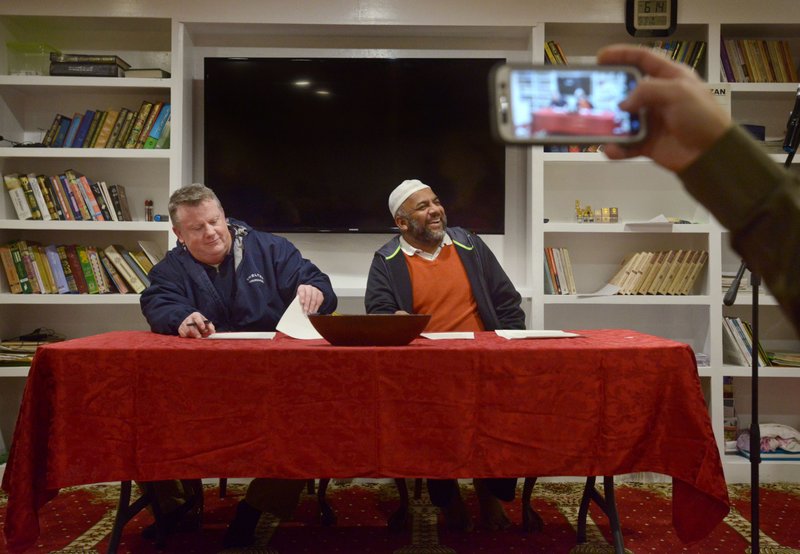 Scott Comiskey (left), senior warden at All Saints’ Episcopal Church in Bentonville, and Muhammad Khan, president of the Bentonville Islamic Center, sign a Letter of Understanding during a ceremony Feb. 2 at the mosque. The letter outlined an agreement between the two faith groups to build the Abrahamic Interfaith Center that would serve both.

Christians and Muslims gathered together Feb. 2 at the Bentonville Islamic Center. Members of the community who call the center home welcomed all, shaking hands. Women wearing hijabs hugged strangers without them. And at 5:30 p.m., the appointed time for prayers, four Muslim men gathered in front of a niche set into the mosque wall nearest Mecca. They chanted, kneeled and bowed, following the centuries-old tradition.

"When I watched my friends pray today, I realize they are part of our liturgical tradition," said the Rev. Roger Joslin, vicar of All Saints Episcopal Church in Bentonville. "Chants, songs, prayers and routines bind people together with a common sense of worship."

The monotheistic traditions of Judaism, Christianity and Islam all emerged from the Middle East and are closely linked to one another. All three claim a common origin in Abraham. In Judaism, Abraham is considered the primary physical and spiritual ancestor of the Jewish people. Christians think of Abraham as the patriarch of God’s covenant people, from whom the promised Messiah, Jesus, emerged. In Islam, Abraham is also regarded as the founding patriarch. However, in Islam, Abraham’s legacy is passed down — not through Isaac (as in Judaism and Christianity), but through Ishmael.

They are three religions all worshiping the same God.

Each of the Abrahamic faiths can also be thought of as “People of the Book,” accepting a particular written text as sacred and divinely inspired. For Jews, the sacred texts are the Books of Moses, the Prophets and the Writings collected in the Torah. For Christians, it is the Bible (the Hebrew scriptures and the New Testament). In Islam, the sacred text is the Qur’an or Koran.

All three of the Abrahamic religions teach a moral code based on the love of God and kindness to one’s neighbor.

This commonality brings unlikely groups of believers together to build one facility for worship.

The Abrahamic Interfaith Center became an official organization during this gathering, as Scott Comiskey, director of All Saints vestry (the governing board of the Episcopalian church), and Muhammad Khan, president of the Islamic Center, signed a Letter of Understanding, creating the organization.

"The letter ... was approved by the governing bodies of both congregations and describes our vision of a 'shared house of worship, where our communities may dwell together, distinct in our beliefs and practices, and fully supportive of each other's identity.'"

The facility will house local congregations of the Abrahamic faiths -- Christian, Muslim and Jewish. Congregation Etz Chaim was involved in early conversations about the tri-faith center, but changes in leadership postponed the Jewish community's involvement, Joslin reported.

Conversations about the project began two years ago -- "and the meetings covered the gamut," Joslin said. "We had some heated discussions over issues in the Mid-East -- but these were done with respect and love. Then we went back to our congregations to explore the idea."

"This framework launches us on the path," Joslin announced.

Currently, the congregations are choosing members for a board of directors for the Abrahamic Interfaith Center. Each congregation will name three members, with three members chosen from the community at large, Joslin explained.

"The board will have a great deal of autonomy," he said.

Land north of Main Street in Bentonville slated for the construction of a church building for All Saints will be transferred from the Episcopal Diocese of Arkansas to the board as the site for the interfaith center. Fayetteville architect Marlon Blackwell originally was retained to design a church building for the Episcopal congregation, but his design will be amended to be a home to all, Joslin said.

The facility initially will include one worship space to share for larger gatherings, with individual chapels for each faith possibly added later, Joslin continued. And the facility will have to be innovative to serve the needs of each congregation.

For example, the Episcopalians will want chairs with kneeling benches in the space, but they will need to be moved quickly for the worship of another congregation, Joslin said. For the Muslims, the chairs will be removed, and carpets that can be rolled out for prayers will be stored in the walls.

The facility also must include a place for ritual cleansing by the Muslims, and kosher and halal kitchens are needed for food preparation according to Jewish and Muslim law, he added.

The next steps for the Abrahamic Center include writing bylaws and a two-year period for fundraising, and several groups have expressed interest, Joslin said.

"Alice Walton [of the Walton Family Foundation] promised to be a part of it financially and in spirit. It fit well with the Walmart idea of bringing people from all over the world together with their talents and skills."

"[The interfaith center] is a better use of resources from an economic sense. It's a better utilization of space," Comiskey said.

He envisions a gym as part of the future of the center, where children of all faiths can play together. "And one thing we all want is a classroom to educate the kids.

"We're planting a seed, and we have to nurture it," Comiskey said. "It's long term."

"Help us learn from each other, faith, tolerance and acceptance," Khan prayed to close the signing ceremony. "Help us grow and learn to accept the different colors of your faith."

"In today's toxic political climate, we need a way to fold under all the negative with an uplifting experience," Comiskey said. "I am honored and humbled to sign the document. But I didn't do a whole lot more than I just happened to be the senior warden (of the vestry)."

Members of both the Muslim and Christian congregations had questions and concerns about the Abrahamic Center. "Will we be converted?" "Is this a blending of the religions?" both Kahn and Joslin repeated.

The Muslims also were concerned about what would happen to the current mosque, which has become a safe place for the people, Kahn said. The welcoming congregation of Christians was concerned how people of the LGBT community would be accepted by traditions that don't have the same level of acceptance, Joslin said.

"We reassured them we feel we can live together without believing the same," he said.

"Even in these times, we all live together," Kahn said.

"I feel that we are doing this for the future of the Muslims and this community, Northwest Arkansas," Khan said.

"People don't realize there's a Muslim community here," Comiskey said. "Some of these folks have been here a long, long time. But everybody just stays in their corner. This is designed to end that," he said emphatically.

"In this mosque, people have come from all over the world -- from India, Pakistan, Bangladesh, the Mid-East, Saudi Arabia ... and many were born here," said Issa Abboud, vice president of the Islamic Center. "It's a melting pot. We learn from each other."

Although, most members of the mosque are Sunni Muslim, a few are Shia, groups that traditionally fight each other over governance practices, Abboud said.

"Our congregation is compromised of engineers, doctors, scientists, teachers, business owners and other professions working for the betterment of the entire community of Northwest Arkansas," reads the Islamic center's website. "We are a peace advocating group that participates with interfaith dialogues and events to ensure unity with all other faiths."

Elkhatib hopes the Abrahamic Center will keep on open door and establish a place for dialog to start between people of different faiths, different ideals. "The faiths of Abraham want to coexist."

Kahn explained, that in his faith, the Prophet Muhammad in his time visited with people of all religions. "He went to their prayers," he said.

"What we did [the interfaith cooperation] was already done by the prophets," Kahn continued. "This is nothing new we've invented here."

The Muslim prophet taught love, understanding, tolerance and coexistence. "He did not teach us to have fear or give negative facts. We ask daily for God to forgive us," Kahn concluded.

"We are all children of Adam and Eve," said Hassam Wajid, a longtime member of the Islamic Center. "We all believe in God."