Makers of food size up Amazon 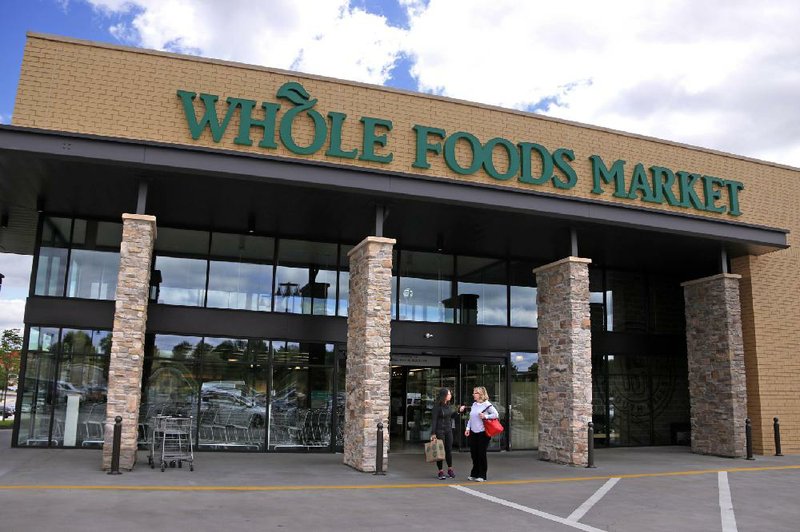 Shoppers stand outside a Whole Foods Market in Upper Saint Claire, Pa., in May. Amazon’s planned $13.7 billion purchase of the grocery store chain will continue to emphasize the sale of locally produced foods.

NEW YORK -- Among the many questions being asked about Amazon's intended purchase of Whole Foods is one from small and medium-size food manufacturers: How might this deal affect me?

The unknowns include whether Amazon might change the grocery chain's food offerings, which at the moment include thousands of products made by small and midsize businesses. A key point for many companies is whether Whole Foods would place less of an emphasis on buying locally produced or innovative foods after the $13.7 billion purchase, expected to become final later this year.

Whole Foods' buying strategy, which appeals to many consumers, has made it possible for small players to get products into regional stores. The company said between 10 percent and 20 percent of the products in each of its stores come from local producers.

But activist investors who advocated a sale of Whole Foods also demanded that it cut the number of products it offers to lower its costs. They contended that buying small amounts of so many food items eroded the company's profits.

Gail Levy, who sells HFactor packaged water to stores including Giant's nearly 200 supermarkets in the East, has approached Whole Foods about her products and gotten some interest. With the Amazon deal pending, though, she said, "we just don't know how that's going to pan out and what it means for us, something good or bad."

HFactor is also sold on Amazon and doing well, Levy said. "I can only hope that having that status with Amazon will help us get into Whole Foods."

Many experts believe Amazon would use its vast distribution system to help streamline Whole Foods' operations. That makes some food company owners who are courting the grocery chain more hopeful about their chances of success under Amazon.

"They [Amazon] already have our gift boxes. It seems like it would be easier to loop that distribution system into Whole Foods," said Michael Volpatt, co-owner of Big Bottom Market in Guerneville, Calif., whose biscuit mixes are sold through Amazon.

Whole Foods has struggled in recent years with declining sales at established stores and increasing competition from big grocery chains across the country that have recognized the demand from consumers and are offering more natural and organic foods. Jeanne David, whose bread and pizza crust made primarily with cauliflower are sold in Whole Foods stores in the West, believes that Amazon's ownership will strengthen the chain and benefit suppliers.

"Amazon will give them the support they need, the financial stability, and Amazon will add to what they're currently doing," said David, owner of Goleta, Calif.-based Outer Aisle Gourmet.

Whatever changes Amazon makes, they're likely to be aimed at holding on to Whole Foods' current customers, said Mike Maher, chief executive officer of Presenture, a company that helps food manufacturers sell their products to retailers. So he doesn't expect that a Whole Foods owned by Amazon would stop buying locally produced food.

However, being competitive on prices is part of Amazon's core culture, and buying larger quantities of a smaller number of products helps a retailer lower its overhead. So "instead of five choices of honey, there could be three," Maher said.

He also expects that Amazon will demand lower prices from food manufacturers than Whole Foods has. "If I were a supplier, I would be concerned about profit margins," Maher said.

Meg Barnhart, who sells spices for slow cooking through both Amazon and Whole Foods, believes there's enough demand for natural or organic products that Whole Foods will continue to seek out ones that are unique.

"It would be such a radical change if the company didn't go in that direction," said Barnhart, whose company, The Zen of Slow Cooking, is based in Lake Forest, Ill. Her products are sold in 22 Whole Foods stores in the Chicago area.

But because of the growing number of retailers courting the natural and organic food shopper, some food companies are bypassing Whole Foods.

Muuna, a company that makes single-serving containers of cottage cheese, is content selling in big chains in the Northeast, CEO Gerard Meyer said. He doesn't expect the Amazon-Whole Foods deal to have a big impact on his company for now.

However, Meyer is interested in seeing whether Amazon, through its ownership of Whole Foods, can find a way to use its distribution system to deliver perishables such as cottage cheese.

"If they figure that out, it portends well even for brands like ours," he said.