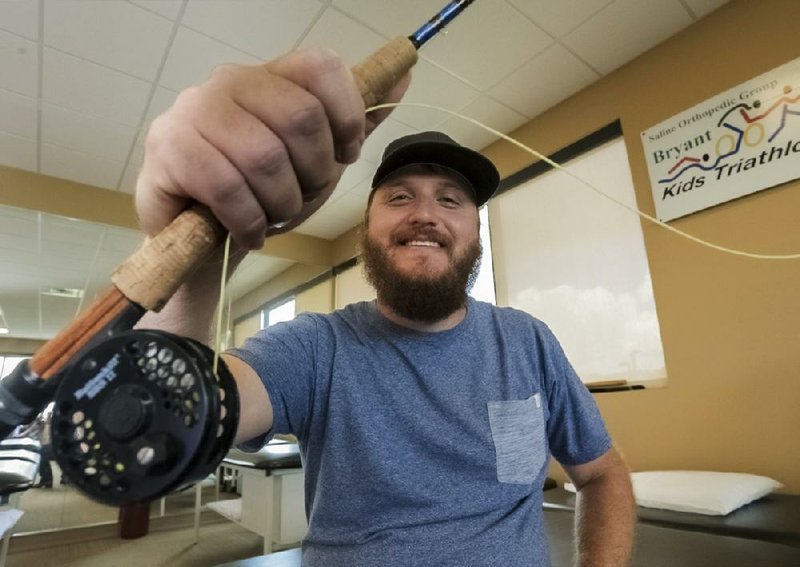 An avid outdoorsman, Cullen Bullard serves as a mentor with The Mayfly Project, a nonprofi t that uses fly-fishing to help children in foster care build character and self-esteem.

Fly-fishing is where the world melts away for Cullen Bullard. 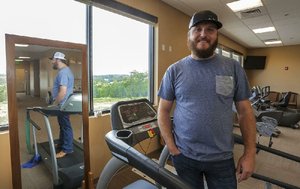 Photo by John Sykes Jr.
Cullen Bullard says a rewarding aspect of The Mayfly Project is watching a foster child’s face light up with excitement after catching that first fish. His day job is as an occupational therapist and director of the rehab department at Arkansas Bone and Joint in Benton.

Surrounded by the sounds of wildlife chirping and buzzing and the water gurgling, Bullard's mind is put at ease. No troubles, just cool water racing around his body, the meditative flicking of the fly-fishing rod and the dancing of the fly as it floats toward the stream.

"It's different from any other type of fishing," says Bullard, 32. "I've done competitive bass fishing; I've done saltwater fishing; everything. It's different because you're more in tune with nature. Most of the time you're in the water. It's much more relaxing. It's something about the breeze. The fog. The smell of the river."

Growing up in Benton in a family that loved the outdoors, Bullard started fishing when he could barely walk; fly-fishing came when he was about 12. He first started in ponds and streams in Saline County and has since fly-fished in spots such as the Black Canyon in Colorado and the West Prong of the Little Pigeon River in Tennessee.

"It's amazing," Bullard says of fishing the Little Pigeon River in October. The first fish he caught there was an 8-inch trout, and that catch is one of his favorite fishing tales. "It was a wild trout. It wasn't placed in there or stocked. It was fall. It was beautiful. The perfect scenario for me."

In the last couple of years though, fly-fishing has taken a new angle for Bullard: He has been sharing his passion for the sport with foster children through The Mayfly Project, a Benton-based nonprofit that uses fly-fishing as a way to mentor children in foster care.

Founded by Bullard's friend Jess Westbrook, The Mayfly Project was officially granted its 501(c)(3) status in December 2015. Over a series of five sessions, children learn about fly-fishing, from line management and casting techniques to catch and release tactics and the value of conservation. The program also offers fly-fishing expeditions, including a trip to Dry Run Creek in Norfork.

At the end of the sessions, the foster children are supplied with all the equipment they need to fly-fish on their own, from rod and reel to shirts and hats. Foster children involved with the project have ranged from as young as 4 to as old as 17, but typically are 7 to 14.

Westbrook, a fly fisherman since he was about 8, says the sport is an escape for him, and after the birth of his first child with his wife, Laura, he realized fly-fishing also could benefit children in foster care.

"I started having anxiety issues when I was 28, and I started using fly-fishing as a coping mechanism," says Westbrook, 31. "It seems like every time I step into the water my anxiety, my stress, everything I'm worried about just disappears. Our hope is to transfer that to the kids. Instead of the kids turning to drugs or alcohol or some other vice, we want them to use fly-fishing to cope with the anxieties, the stresses, the situations they've been dealt that they didn't choose."

The Mayfly Project has since expanded to eight states and includes about 40 mentors.

Through July 31, the project is holding its One Fly Event, a fundraiser where purchased flies donated from Holly Flies serve as tickets for winning prizes such as rods and reels, artistic prints and even a Travis Wood-signed Chicago Cubs jersey. Winners will be drawn at 7 p.m. July 31 on Facebook Live.

Bullard and his wife, Krystina, are both involved with The Mayfly Project, with Cullen mentoring and on the nonprofit's board. Krystina Bullard is the project's photographer and videographer.

"When he or she learns how to tie their own flies and how to cast and then they can successfully go out there and catch a fish, it gives them a form of self-confidence. Knowing they can succeed is something that they can use later in life."

For more information on The Mayfly Project and about the One Fly Event, visit themayflyproject.com.