Bolding back in business 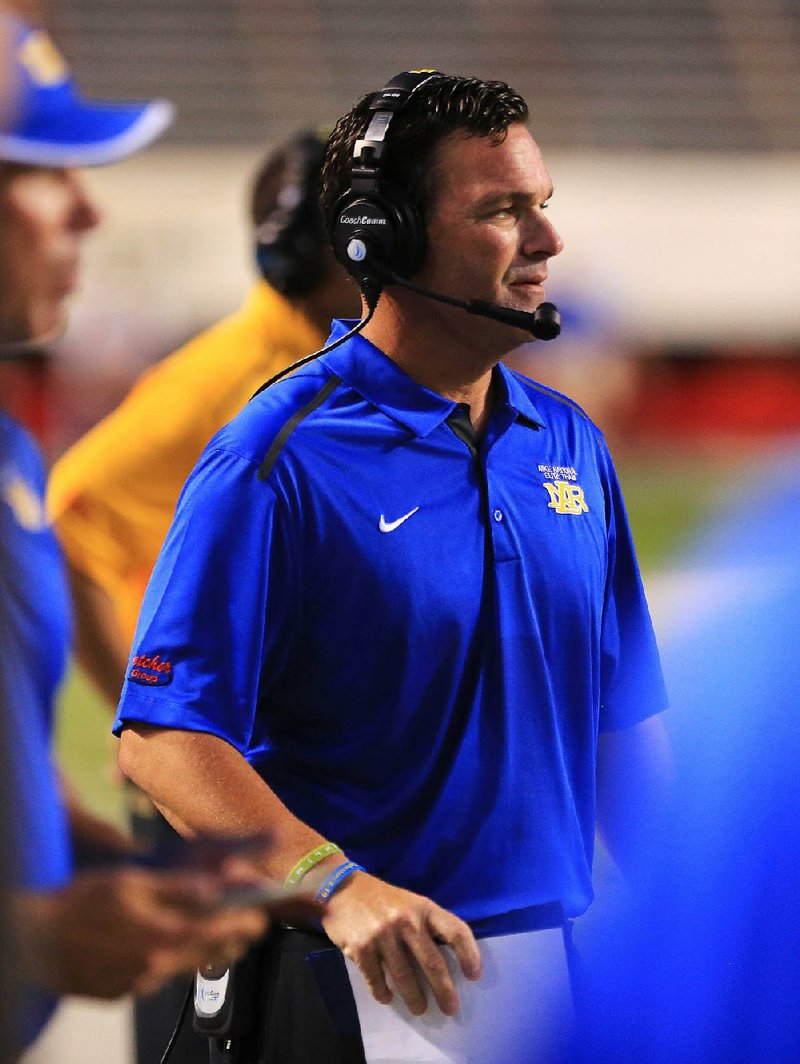 Little Rock Parkview football Coach Brad Bolding, making his return after being fired by North Little Rock in April 2015, has high expectations for the Patriots this season.

In his two seasons away from the high school football sidelines, Brad Bolding was always looking to get back into the game. 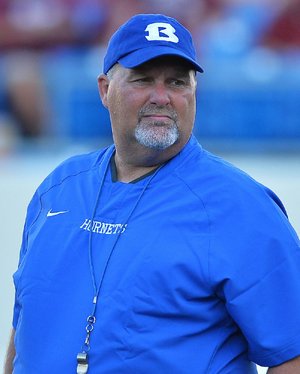 Bolding, who coached at North Little Rock in 2007-2014 before being fired in April 2015, is back in high school football with Little Rock Parkview and led the Patriots this week in the Senator Showdown 7-on-7 tournament at Joe T. Robinson.

A breakdown of the tentative Arkansas high school football conference assignments for the 2018-2020 cycle, which were announced earlier this month. Schools have until June 27 to appeal conference and/or classification assignments.

^Smith did not coach a game; took over for Chad Floyd

%Shrable did not coach a game; took over for Tommy Britt

The Patriots were 1-8 last season, with their lone victory coming in Week 5 against Little Rock Fair. But Bolding, who won 10 or more games in four of his eight seasons at North Little Rock, has high expectations for Parkview, which has not had a winning season since 2009.

"We expect a lot out of our players," said Bolding, who has 62 players in the program as of Thursday. "Luckily, I was there in January so we were able to establish a lot of that [expectations].

"We're taking baby steps, but we're getting there. That's the main thing."

Bolding was fired in April 2015 by North Little Rock for violating inventory and purchasing procedures and recruiting rules. He was in television and in private business the past two years, but admitted when he was hired in December that he missed the game and that the two-year break recharged his batteries.

On Thursday, Bolding was on the sidelines in Little Rock, encouraging his Patriots as they competed in the Senator Showdown. Parkview went 3-2 in the tournament, losing to Lonoke in the second round.

Despite Parkview's inexperience, Bolding said he expected his team to play deep into the tournament.

"It doesn't matter what we're doing," Bolding said. "We want to win in everything."

Competition is one of Bolding's goals early on as he attempts to rebuild a Parkview football program that will have its third coach in three seasons. William Hardiman was placed on administrative leave by Parkview last August and pleaded guilty to sexual assault in January and Kenny Stephens was the Patriots' interim coach in 2016.

"We want to compete against each other," Bolding said. "We want to have a winner and a loser. We don't want you to get accustomed to feeling the losing. It's not an acceptable mindset. We're always preaching to them that we always want to win. It needs to hurt when you don't win. You don't want to feel that feeling anymore.

"When we get a collective group thinking like that and all believing that, that's when you win."

Parkview will open the season Sept. 1 at Star City.

Bryant advanced to the Class 7A semifinals for the first time last year in Buck James' first season at the school.

James, who replaced Paul Calley before the 2016 season, installed a Spread offense and had to hire six new assistants, with Brad Stroud as the lone holdover from Calley's staff. The Hornets started 2-2, but won five of their final six games to reach the Class 7A playoffs.

The veteran coach, who led Camden Fairview to the Class 5A state championship in 2012 and also has coached at Star City, said Friday at the Shootout of the South in Little Rock that it's a three- to five-year process to start a program over. However, it was a different situation at Bryant, which was successful under Calley, who is now at Benton Harmony Grove.

"This program wasn't broken when I got here by any means," James said. "It was getting to the playoffs and making a run in the playoffs.

"Our goal is to win a state championship. Part of the process is to go a step farther than you've ever been, then try to get to the game and try to win the game. That's what we keep preaching to these kids.

"That's why we're going through this grind."

The Hornets return junior quarterback Ren Hefley, who transferred to the school last June. Hefley, one of the top sophomores on last year's Arkansas Democrat-Gazette's All-Arkansas Preps team, shared time with Beaux Bonvillain, but took over as the Hornets' starting quarterback midway through the season. He accounted for 16 touchdowns last season and was 7-2 as Bryant's starter.

"Ren is a lot bigger and stronger," James said. "He's more mature and a lot more comfortable in what we're trying to do. Last year, we were constantly pushing it on him. [Hefley] being a sophomore and doing what he did for our football team, it was remarkable."

Little Rock Christian played in its first 7-on-7 tournament Thursday under new coach Eric Cohu and won it.

Cohu, a Harding University graduate, was hired by Little Rock Christian in April, replacing Jeff Weaver, who is now at Russellville. He was 87-12 in seven seasons at Madison Academy in Huntsville, Ala., leading the school to three Class 3A state championships.

"Our guys have worked hard," Cohu said. "They've worked hard in spring ball. They've showed up every day in the summer. We're learing execution and doing it properly.

"It paid off today [Thursday]. They're in good shape. These 7-on-7s that last all day, it's an attrition thing. We did a good job of staying the course and competing all eight games."

Little Rock Christian went 5-7 last season, but defeated 5A-South champion White Hall in the first round of the Class 5A playoffs behind quarterback Jackson Bowersock and running back Ladarius Burnes. Bowersock and Burns will return for their senior seasons and sophomore Chris Hightower is expected to start this season after earning playing time as a freshman a year ago.

"We've got a lot of special football players on this team that can make plays," Cohu said.

While 7-on-7 is played without offensive and defensive linemen, Cohu said the experience of playing in the tournament can only help his team.

"It's not regular football, but it shows a competitive spirit and nature and who can make some plays," Cohu said. "It's a game within a game because it's a different deal. But it shows perseverance and who the playmakers are."

Allen, Texas, won the Shootout of the South 7-on-7 tournament Saturday, defeating Springdale Har-Ber 38-29 in the championship game in Little Rock. Allen's victory snapped a seven-year streak by Pulaski Academy, which lost in the first round Saturday to Glendale, Mo. ... The Arkansas Activities Association's two-week dead period is June 26-July 9. Athletic programs are prohibited from participating in any activity during the period. ... Pulaski Academy Coach Kevin Kelley said assistant coaches Madison Taylor and Jason Wyatt will serve as co-defensive coordinators for the 2017 season. The Bruins' defensive coordinator post was left vacant earlier this year when Todd Wood left to fill the same position at Russellville under new coach Jeff Weaver. Also, Adam Thrash, who was the quarterback of Pulaski Academy's first state championship team in 2003, will be the Bruins' defensive line coach. He coached at Maumelle last season. ... Bryant, Fort Smith Northside and Pulaski Academy will play in the USA Football National 7-on-7 Tournament from July 14-15 at the Dallas Cowboys' headquarters, The Star, in Frisco, Texas.

Print Headline: Bolding back in business