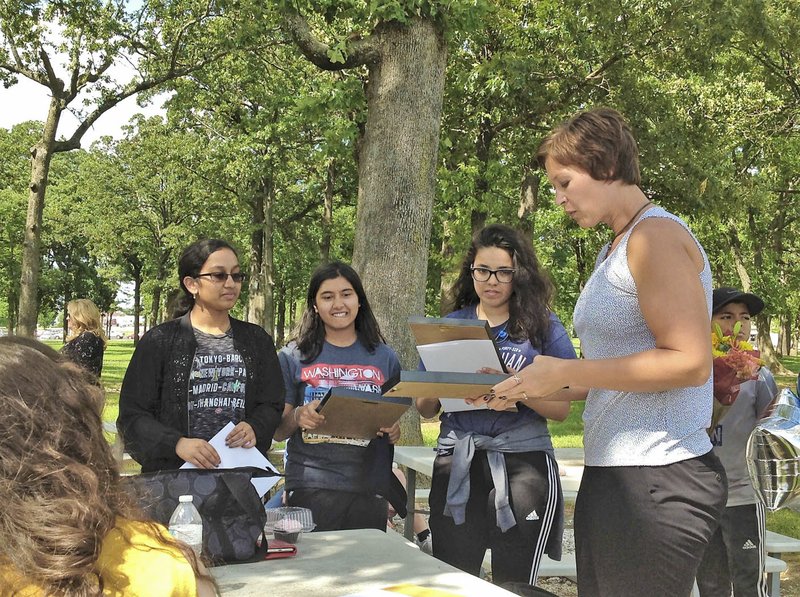 ROGERS -- A team of three Rogers teens this week became the first from Northwest Arkansas to earn a first-place prize in the National History Day contest.

Venkata Panabakam, Denise Martinez and Sidra Nadeem arrived home Friday to a celebration in their honor outside New Technology High School, where all three will be juniors this fall.

To view Standing with the Voiceless: The Life and Legacy of Archbishop Oscar Romero, go to www.youtube.com/watch?v=Ase_lgCS_6c?

They took first place for their documentary, Standing with the Voiceless: The Life and Legacy of Archbishop Oscar Romero, at the national contest at the University of Maryland. They will share a $1,000 prize from the National Endowment for the Humanities.

State Rep. Jana Della Rosa, R-Rogers, was at New Tech on Friday to present the students citations from the House of Representatives and letters of commendation from Gov. Asa Hutchinson and state Sen. Cecile Bledsoe, R-Rogers.

History Day is a competition for students in middle school and high school. There are five categories: documentaries, exhibits, papers, performances and websites. All categories have a junior and senior division. Each category, aside from papers, also has a group and an individual category.

The girls said they started working on the documentary in November. They put hundreds of hours of work into it.

"We've been meeting up almost every single day working on it and getting lots of people's feedback and contacting so many people outside Rogers to fact-check us," said Venkata, 15.

Romero stood up against the Salvadoran government's oppression of its people and called for an end to the violence against civilians during that country's civil war, which lasted 1980 to 1992. He was assassinated in 1980 while offering Mass.

Romero's life is a topic not as well known as it should be, which is why the Rogers students chose it for their documentary, they said.

"And plus, there are a lot of people from our community who are from El Salvador and they always tell the story, but they never finish it because they always end up crying," said Nadeem, 16.

It's the first time in almost a decade a person or group from Arkansas has placed first at the national event, according to Jami Forrester, a Northwest Arkansas Community College professor who has coordinated the regional History Day contest for six years.

"It's the Super Bowl of history competitions, so they just won the Super Bowl," said Forrester, who wept while watching the Rogers girls accept their first-place award Thursday.

"I've been involved in History Day since I was a junior in high school. I've never known anyone personally that has won at the national level. It's been a long journey," Forrester said.

National History Day, founded in 1974, has grown from a contest of a few hundred students to an international educational organization promoting the appreciation of history education.

The Rogers students were helped along the way by New Tech teachers Danny Burdess, Casey Bazyk and Todd Sisson.

"They did a really good job of taking feedback and implementing it in a way that made sense," Burdess said.

To reach the national competition, the girls had to get through the district and state levels. They finished second in their category at both of those first two levels.

All three girls vowed to compete in History Day again next year.

While the New Tech group had the most success, others from Northwest Arkansas did well, too. A group from Bentonville's Fulbright Junior High School placed eighth in the junior group exhibit category.