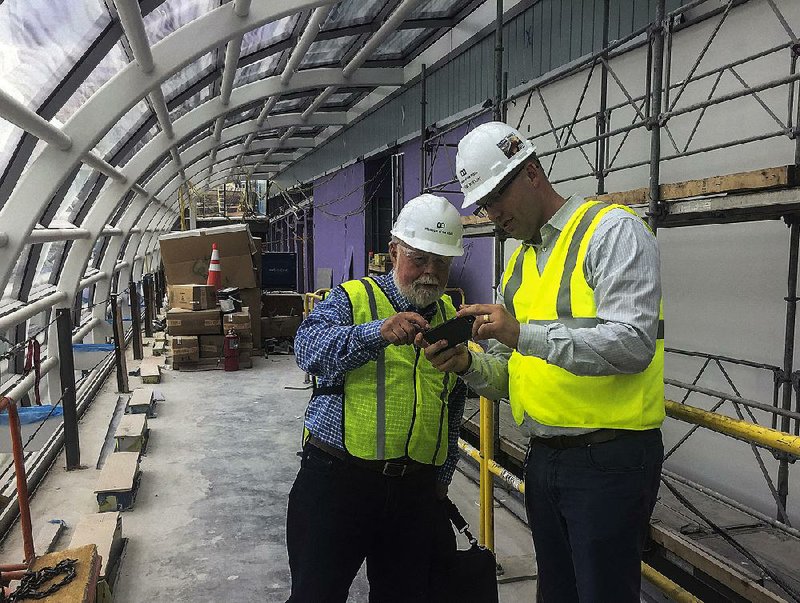 Harry Thomas, a music festival director from Pennsylvania, and museum spokesman Jeremy Burton (right) pause during a tour of the Museum of the Bible in Washington on Thursday.

The half-billion-dollar Museum of the Bible, an eight-story, 430,000-square-foot project, is scheduled to open this fall.

For now, it is still very much a construction zone, littered with ladders and power tools and equipment. There are bags of white Portland cement, boxes of drill point drywall screws and tile to be installed.

So far, everything's going as planned.

"Right now, the construction is on schedule, the exhibits are all on schedule. ... We feel very good about our progress," said museum Executive Director Tony Zeiss.

The dedication is set for Nov. 17, six days before Thanksgiving. Hobby Lobby President Steve Green of Oklahoma City is spearheading the project.

"There's never been a museum of this size, a world stage museum developed for the Bible, so we're making history here," Zeiss said.

Organizers considered placing the museum in Texas, but ultimately placed it in southwest Washington, D.C., a couple of blocks from the National Mall and roughly a half-mile from the Capitol rotunda.

It was, officials say, the most logical spot for the $500 million privately funded facility.

"The No. 1 city of museums in America is Washington, D.C., and I think the survey data just overwhelmingly underscored that point. That's why we chose Washington, D.C.," Zeiss said in an interview Friday.

The goal is to educate, not to proselytize, organizers say.

"We are not advocates for any religion or any ministry or any doctrine. We simply are advocates for the Book and we present the Book to all people," Zeiss said. "Think about it, no other book has had such an impact, certainly on Western civilization, if not the world, than the Bible."

During a tour Wednesday, museum spokesman Jeremy Burton walked visitors around the facility, including travel writers from Germany and the Rev. Harry L. Thomas, director of an annual Christian music festival.

As he walked, Burton outlined the museum's objectives.

There'll be fragments of ancient parchments and experts on hand to study them. There'll be a garden on the top floor, featuring plants from Israel and thereabouts.

One floor will feature a replica of the 2,080-pound Liberty Bell. The iconic symbol of American independence is engraved with a passage from the book of Leviticus: "Proclaim Liberty throughout all the land unto all the inhabitants thereof."

There'll also be a replica of Johannes Gutenberg's printing press. The Library of Congress has described the Gutenberg Bible as "the first great book printed in Western Europe from movable metal type."

Each guest will be handed a tablet to help them navigate the eight floors. There's even a GPS-type system to help visitors find their way.

On the first floor, a 140-foot-long digital display will be running throughout the day.

There'll even be a ride, of sorts, that simulates air travel, complete with bird's-eye views and artificial wind gusts.

"It's going to make you feel like you're flying around Washington, D.C.," Burton said. "The whole platform is moving you're up there moving with it."

Admission won't be charged, but voluntary contributions will be recommended, Burton said.

"I think it's phenomenal," he said. "It's going to take me days to go through it, but I can't wait."