Is a single-payer system the solution? by ALEXANDER BURNS and JENNIFER MEDINA New York Times News Service | June 11, 2017 at 2:01 a.m. 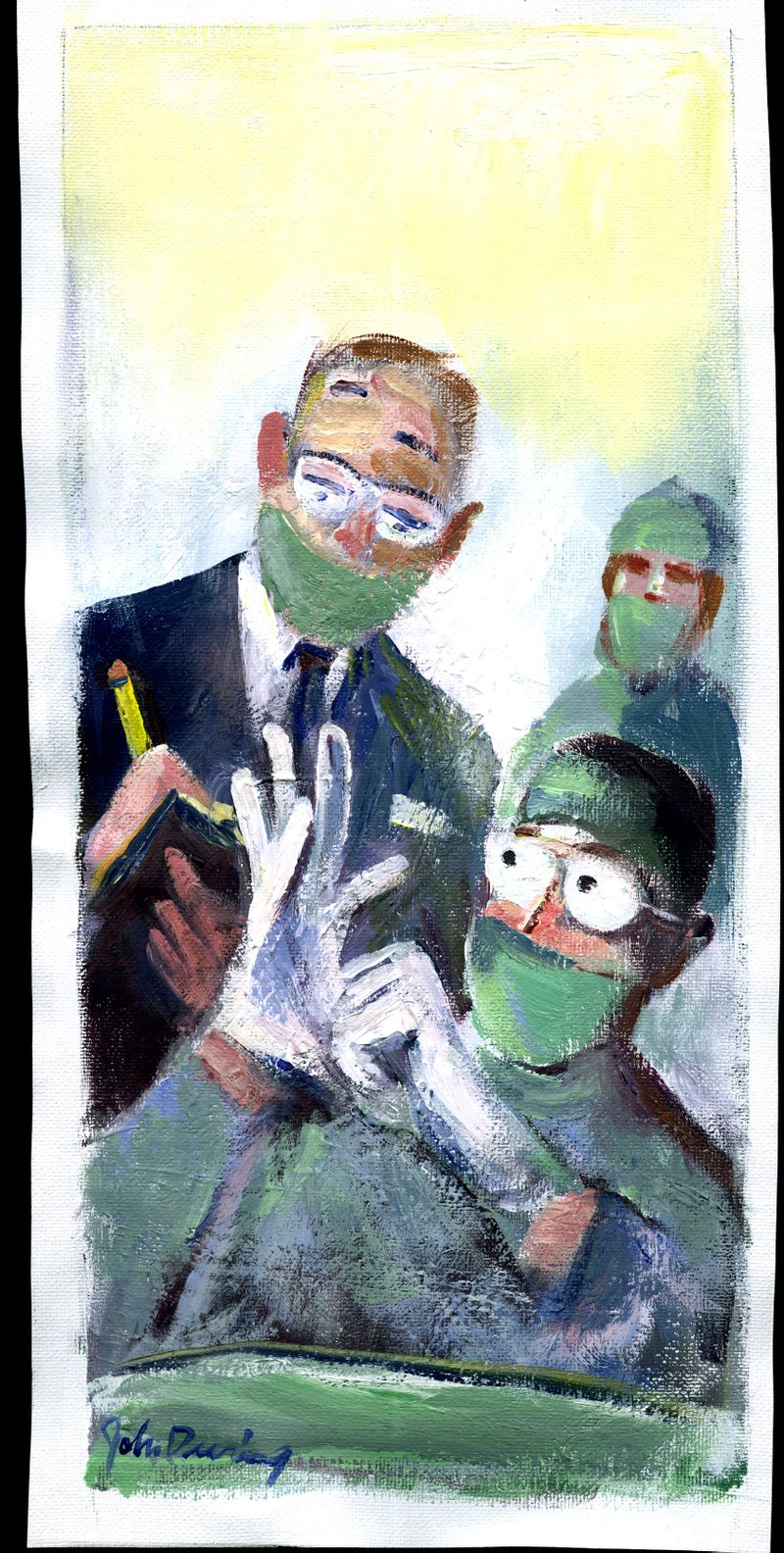 For years, Republicans savaged Democrats for supporting the Affordable Care Act, branding the law--with some rhetorical license--as a government takeover of health care.

Now, cast out of power in Washington and most state capitals, Democrats and activist leaders seeking political redemption have embraced an unlikely seeming cause: an actual government takeover of health care.

At rallies and in town hall meetings, and in a collection of blue-state legislatures, liberal Democrats have pressed lawmakers, with growing impatience, to support the creation of a single-payer system, in which the state or federal government would supplant private health insurance with a program of public coverage. And in California recently, the Democrat-controlled Senate approved a preliminary plan for enacting a single-payer system, the first serious attempt to do so there since then-Gov. Arnold Schwarzenegger, a Republican, vetoed legislation in 2006 and 2008.

With Republicans in full control of the federal government, there is no prospect that Democrats can put in place a policy of government-guaranteed medicine on the national level in the near future. And fiscal and logistical obstacles may be insurmountable even in solidly liberal states like California and New York.

Yet as Democrats regroup from their 2016 defeat, leaders say the party has plainly shifted well to the left on the issue, setting the stage for a larger battle over the health care system in next year's congressional elections and the 2020 presidential race. Their liberal base, emboldened by forceful advocacy of government-backed health care last year by Sen. Bernie Sanders (I-Vt.), is increasingly

unsatisfied with the Affordable Care Act and is demanding more drastic changes to the private health insurance system.

In a sign of shifting sympathies, most House Democrats have endorsed a single-payer proposal. Party strategists say they expect that the 2020 presidential nominee will embrace a broader version of public health coverage than any Democratic standard-bearer has in decades.

RoseAnn DeMoro, executive director of National Nurses United and the California Nurses Association, powerful labor groups that back single-payer care, said the issue had reached a "boiling point" on the left.

"There is a cultural shift," said DeMoro, who was a prominent backer of Sanders. "Health care is now seen as something everyone deserves. It's like a national light went off."

Rep. Rick Nolan (D-Minn.), who is considering a run for Minnesota governor in 2018, said he had rarely seen core Democratic voters as enthusiastic about an issue as they were about single-payer health care. Nolan, a populist Democrat whose district voted for President Donald Trump by a wide margin, said he would press for a state-level single-payer system if he entered the governor's race.

He warned Democrats against being too cautious on health care or trusting that they could passively reap the benefits of Republican missteps, saying that his party needed a more boldly "aspirational" health care platform.

Rank-and-file Democrats, Nolan said, "are energized in a way I have not witnessed in a long, long time."

At this point, state and federal single-payer proposals appear mainly to embody the sweeping ambitions of a frustrated party, rather than to map a clear way forward on policy. A handful of legislators in Democratic states--some positioning themselves to run for higher office--have proposed single-payer bills, including in New York, New Jersey, Rhode Island and Massachusetts. Only in California does the legislation appear to have at least a modest chance of being approved this year.

Even there, state Democratic Sen. Ricardo Lara, an author of the bill, said his legislation would not clear the state Assembly without detailing how expanded coverage would be financed. The proposal lacks a complete funding plan.

The bill would mandate far more comprehensive access to health care, with no out-of-pocket costs, for all California residents at an estimated cost of $400 billion annually. Roughly half would come from existing public money spent on health care, but the rest would require new taxes. Gov. Jerry Brown, a Democrat who once campaigned for president supporting single-payer care, has questioned how the state can plausibly foot the bill.

Should California enact a single-payer law, it would still require a waiver from Washington to redirect federal funding to the state program, which might be difficult with Trump appointees running the Department of Health and Human Services.

But Lara said that Trump's election, and subsequent Republican efforts to unwind the Affordable Care Act, had upended the conversation about health care among Democrats. He said he would have been unlikely to press for single-payer under a Democratic president.

"I no longer have the luxury of going step by step," Lara said. "We need to do a single-payer or we're going to be in a position where millions of people are going to lose coverage."

There remains considerable skepticism among senior Democrats about a single-payer plan, and party strategists fear that proposing a potentially divisive health care agenda would offer Republicans a welcome diversion from their own tortured wrangling over the Affordable Care Act.

At a briefing with reporters in May, the House minority leader, Rep. Nancy Pelosi (D-Calif.), replied with a flat "no" when asked if Democrats should make single-payer a central theme in 2018. She said state-level action was more appropriate, though she said she supported the idea in concept.

"The comfort level with the broader base of the American people is not there yet," Pelosi said.

In the past, top Democrats--including President Barack Obama and Hillary Clinton--have suggested more incremental approaches, proposing the creation of an optional government health plan that people could buy into or lowering the eligibility age for Medicare.

Democrats were unable to pass either of those measures into law the last time they controlled Congress and the White House in 2010, because they failed to draw unanimous support from both liberal and centrist Democrats. Obama never tried to create a full single-payer system, and Clinton described the idea as unachievable during the 2016 campaign.

A study published in January by the Pew Research Center found that about 40 percent of Democrats favored a single-payer system, including a slight majority of self-described liberal Democrats. Among all Americans, support was markedly lower: Just 28 percent said government should be the sole provider of care.

But a sizable majority--about 3 in 5 Americans--said the government had a responsibility to ensure everyone had health care. And the idea of single-payer health care has stirred interest among some business leaders, like Warren E. Buffett and Charles Munger, who see health care costs as a drag on the economy.

Karen Politz, a senior fellow at the Kaiser Family Foundation who has tracked the single-payer debate for years, said it would be difficult to persuade the country to move to an all-government health care system -- a disruptive process that would likely lead to higher taxes in place of the premiums people now pay to insurance companies.

Even if most consumers paid less overall, as single-payer proponents claim, Politz said, morphing premiums into taxes would be culturally and politically challenging. "It does involve big government, and it's kind of baked into the American psyche that we resist that," she said.

Still, Democrats acknowledge that there is a palpable appetite on the left for comprehensive government health care. A number of the party's potential 2020 presidential contenders, including Sens. Cory Booker of New Jersey and Kamala Harris of California, have signaled support for some version of universal government care, though neither Booker nor Harris has endorsed the single-payer proposal.

In the House, 112 of the 193 Democrats have co-sponsored a single-payer bill proposed by Rep. John Conyers Jr. of Michigan and called the Expanded and Improved Medicare for All Act. Until recently, the bill had attracted a fraction of that support.

The Conyers proposal would effectively void the current private health insurance system and impose new taxes on wealthy people and on certain kinds of income to pay for benefits. In May, the bill won a symbolically telling endorsement from Rep. Joseph Crowley of New York, chairman of the Democratic caucus and a leading possible successor for Pelosi.

Crowley said his support for the bill was "part practical, part aspirational," conceding that there was no immediate path to making it law.