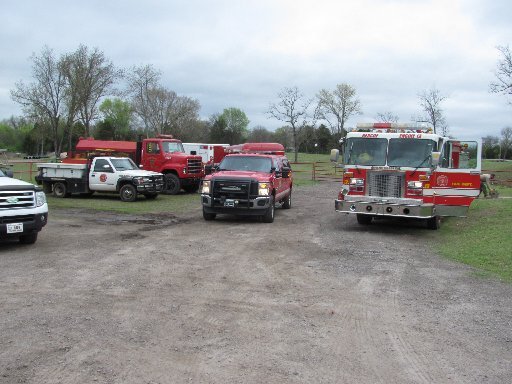 The former chief of the Jenny Lind Volunteer Fire Department and his father were charged Tuesday with felony conspiracy to commit theft, accused of giving away the department's firefighting equipment after Sebastian County dissolved the department.

Brian Allison, 33, and James Dean Allison, 60, both of 3215 Jenny Ridge Way in Greenwood, were arrested Monday and released from the Sebastian County jail after each posted bond of $2,500. They are scheduled to be arraigned Monday in Greenwood District Court, according to the court clerk's office.

Jenny Lind is an unincorporated community between Fort Smith and Greenwood.

A probable cause affidavit by Sebastian County sheriff's Deputy Anthony Sacco dated Thursday said Brian Allison, who was elected chief March 7, contacted Cedarville Fire Chief Jessie Hyatt on March 21 and offered to give the Cedarville department Jenny Lind's self-contained breathing apparatus and a pumper truck with other department equipment in it.

The affidavit said that, before loading the equipment, Brian Allison gave Hyatt a letter stating he was donating two brush trucks, a tanker truck, an ambulance, bunker gear, hoses, fans and other equipment to the Cedarville department.

Brian and James Dean Allison told Hyatt the Jenny Lind Fire Association Board wanted Cedarville to have the equipment, but the board was unaware and did not approve any transfer of property to the Cedarville department, according to the affidavit.

Crawford County Prosecuting Attorney Marc McCune did not respond Tuesday to a request for comment on whether Hyatt was investigated or charged in the transfer of the Jenny Lind fire equipment.

The Jenny Lind Fire Department had been under fire for failing to participate in training with neighboring departments. There also were complaints its equipment was unreliable and prone to breakdowns and that there was a lack of command and control at fire scenes that jeopardized firefighter safety.

Other departments refused to work with the Jenny Lind department because of safety concerns.

The Sebastian County Quorum Court voted March 21 to dissolve the Jenny Lind department by passing an ordinance that set up eight rural fire districts and did not include Jenny Lind. Jenny Lind's territory was distributed among the four rural fire departments surrounding Jenny Lind.