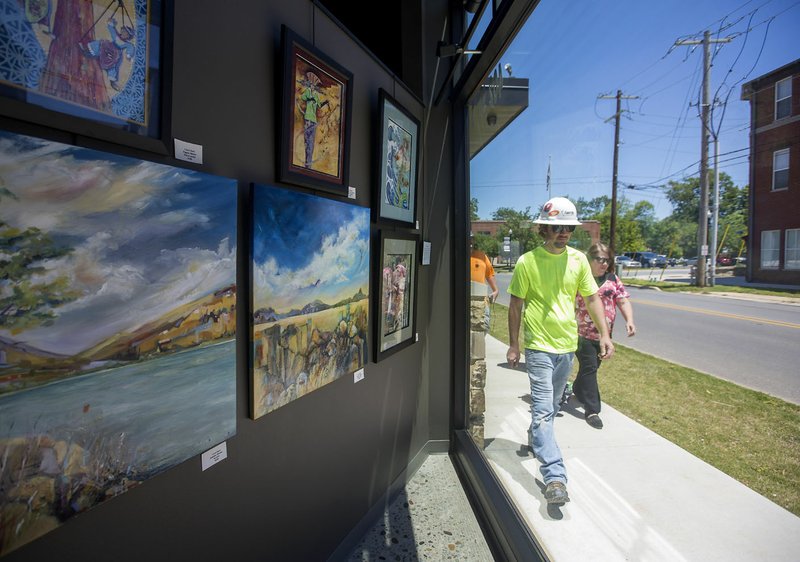 Pedestrians walk along the sidewalk with artwork by Carol Hart displayed May 25 in the window of First National Bank on S.W. A Street in downtown Bentonville. - Photo by Jason Ivester

BENTONVILLE -- The area around Southwest A and Southwest Fourth streets is nearly unrecognizable as to what it was prior to 2014 when city officials first identified what is becoming the Art District. 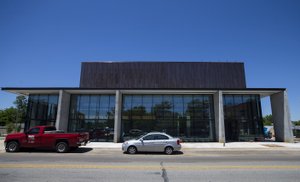 Photo by Jason Ivester
Construction continues May 25 on the movie theater on S.W. A Street in downtown Bentonville.

Empty lots on three of the intersection's corners are now apartments, a bank with local artwork and a soon-to-be movie theater. What used to be a lumber yard at 410 S.W. A St. is now The Hub, featuring commercial and office space.

The Art District was one of two experience districts identified in the SE Downtown Area Plan the city adopted in 2014. It continues to expand cultural amenities and housing options a few blocks south of the downtown square. The other is the Market District.

Experience districts are areas that are distinctive in design and what they offer, according to the plan. The downtown square is its own experience district "offering a slice of small town America;" however, it is nearing capacity and has little opportunity for expansion.

The focus of the Art District is to be a concentrated area for the creative sector that promotes and enhances the city's identity as a culturally rich place.

The former Farmers Exchange building at 409 S.W. A St. is the most recent development to open its doors. Just called Exchange, the space offers free co-working space to select startups, mentorship with industry experts and community events that foster connections between entrepreneurs and enterprises, according to the venue's website.

"Bentonville is becoming a great place for the intersection of art, outdoors, food and entrepreneurship," he said. "That's one of the reasons why the Exchange is there."

It's a "huge benefit" to be in the Art District as "usually cool things happen" when artists, designers, entrepreneurs and foodies are in one place, Amerine said, explaining it enhances the quality of life for that area.

Randy Lawson, a Bentonville businessman, bought the building in 2012. He and partners Harrison and Rhonda French wanted to maintain the historic building that housed the co-op for decades, he said.

It's been a fun project turning the building into a space for entrepreneurs and innovators, he said.

It's multiple businesses bringing growth and positive energy to the Art District, Lawson said, naming several including Frank and Lise Wentz, owners of Bentonville Ornamental Iron and The Forge.

The Wentzes moved the manufacturing operation of Bentonville Ornamental Iron out of their building just north of the Exchange about two years ago. They've since opened the Irish-theme restaurant The Forge in it while keeping an office for the iron business in the front.

"I didn't want Bentonville Ornamental Iron to lose its presence since it's been here forever," Lise Wentz said, explaining the building was an iron shop dating back to the 1950s.

The Art District is developing, but it's not where it should be yet as people still prefer to be in the square, Wentz said. More amenities and retail options, not just offices, need to make their way further south, she said.

The movie theater being built on the northwest corner of the Southwest A and Southwest Fourth streets intersection should help, and the widening of Eighth Street a few blocks south may help bring business north, she added.

"It's all evolving," Wentz said. "It's going to take some time."

The 15,761-square-foot, one-story movie theater is taking shape. It will include two large screens, four small screens as well as a full bar and kitchen.

The NWA Downtown Revitalization Fund is behind the project. The Fund is an limited liability corporation focused on downtown-oriented development in Northwest Arkansas. It's funded by members of the Walton family.

The company also is building a 16,230-square-foot, three-story mixed-use retail and office building just north of the movie theater.

Efforts to get an update on the project were unsuccessful by Friday afternoon.

First National Bank of NWA recently moved into its new building in the Art District just south of the movie theater. It is in a soft opening phase and will hold a grand opening Tuesday.

The bank bought the land without knowing city officials would dub the area as the Art District then incorporated the design to be a more active participant in the art scene, said Brent Leas, vice president, community banker and retail team leader.

"The whole concept is to honor that," he said. "We built, with intention, the storefront windows so we could put art on display."

The bank is working with Eureka Springs artist Zeek Taylor to curate the art, which is available for purchase and will rotate every six to eight weeks, Leas said. The artwork by four Arkansas artists is lit all day and night with solar lights.

The SE Downtown Area Plan was a way to make those interested in investing in the community aware of development and redevelopment opportunities in the downtown area, said Troy Galloway, community and economic development director.

It has caused properties to be redeveloped and the city's tax base to increase with new businesses, he said.

There aren't signs in either the Art or Market district of development slowing down.

"I think the two districts will eventually merge into one more diverse district," Galloway said.