Embassy in Israel to stay in Tel Aviv 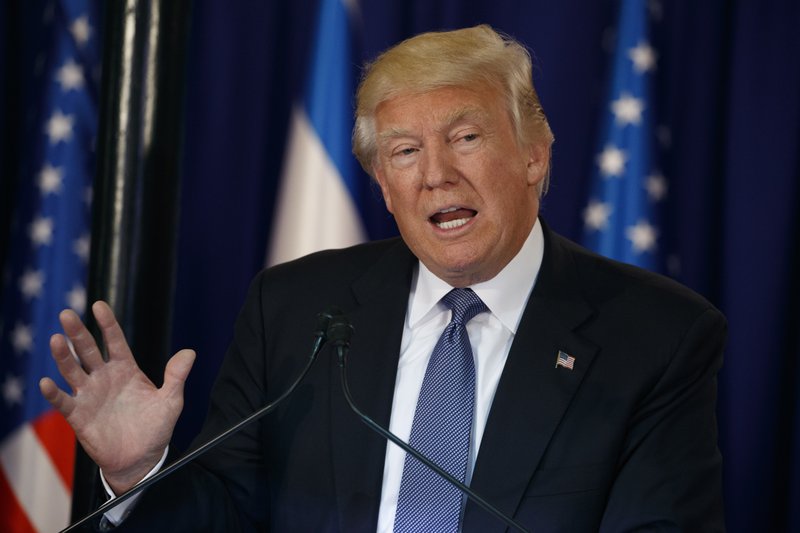 WASHINGTON -- President Donald Trump acted Thursday to keep the U.S. Embassy in Israel in Tel Aviv for now instead of moving it to Jerusalem, a cautious move aimed at bolstering prospects for an Israeli-Palestinian peace accord.

Trump avoided a step that threatened to inflame tensions across the Middle East and undermine a push for peace before it even started. Still, the White House insisted Trump was merely delaying, not abandoning, his oft-cited pledge to relocate the embassy.

"The question is not if that move happens, but only when," said White House spokesman Sean Spicer.

The praise from Palestinian and Arab leaders and the protest from Israelis showed just how far Trump has shifted from the unwavering support for Israel's policies that he expressed during the 2016 campaign. As president, Trump has proceeded cautiously, hoping to preserve his ability to serve as an effective mediator for one of the world's most intractable conflicts.

The decision is a blow to Israeli hard-liners and their American backers who have long urged the United States and others to build their embassies in Jerusalem. Israel considers the holy city to be its capital and insists the city must not be divided; Palestinians claim east Jerusalem as the capital for a future, independent state.

Israeli Prime Minister Benjamin Netanyahu's office said Trump's move had damaged prospects for peace by preserving "the Palestinian fantasy that the Jewish people and the Jewish state have no connection to Jerusalem." Intelligence Minister Yuval Steinitz, a senior member of government, accused Trump of "a surrender" to pressure from Arab and Muslim nations.

"The time has come to put an end to this farce," Steinitz told Army Radio.

Palestinian leaders cheered the move and said it improved the atmosphere for future negotiations by demonstrating Trump's seriousness about the process. Hussam Zomlot, the Palestinian envoy in Washington, said the move "gives peace a chance."

"We are ready to start the consultation process with the U.S. administration," he said after Trump's announcement.

Trump had faced a Thursday deadline to determine how to proceed. Under a 1990s law passed by Congress, the president must move the U.S. Embassy to Jerusalem or the State Department loses half its funding for overseas facilities. But the president can waive the law if asserting that a waiver is in U.S. national security interests.

Presidents of both parties have consistently renewed the waivers for six-month stretches. The last waiver was signed by former President Barack Obama six months ago.

Jerusalem's status is one of the most emotionally charged matters separating the Israelis and Palestinians. Each side stakes claims to a city that plays a central role in Judaism, Islam and Christianity.

During his visit to Israel last month, Trump visited the Western Wall, the Jewish holy site that sits just steps from the Al-Aqsa Mosque, revered in Islam. Both are in the Old City, part of east Jerusalem.

Israel has controlled the western part of Jerusalem, home to most of Israel's government institutions, since gaining independence in 1948. Two decades later, Israel captured east Jerusalem from Jordan in the 1967 Mideast War and annexed it, though without international recognition. The long-standing U.S. position is that Jerusalem's fate must be worked out through Israeli-Palestinian negotiations.

U.S. officials say the process of moving the embassy would take at least six months and involve major adjustments in security, office and housing space and staffing at both the existing facility in Tel Aviv and the consulate in Jerusalem. Building a new complex in Jerusalem could take even longer.

Information for this article was contributed by Matthew Lee, Josef Federman, Ian Deitch and Karin Laub of The Associated Press.

Print Headline: Embassy in Israel to stay in Tel Aviv