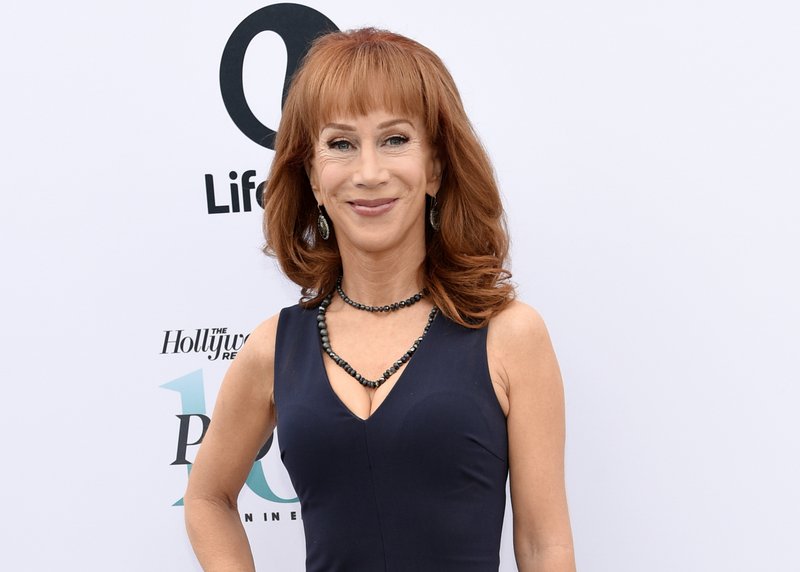 FILE - In this Dec. 7, 2016 file photo, comedian Kathy Griffin poses at The Hollywood Reporter's 25th Annual Women in Entertainment Breakfast in Los Angeles. Griffin's video holding what was meant to look like President Donald Trump's severed head, has resulted in a lost endorsement deal and at least one club engagement for the comedian.

NEW YORK -- Kathy Griffin has lost a decade-long gig ringing in the new year for CNN as a backlash builds over the comedian's video displaying a likeness of President Donald Trump's severed head.

CNN, which had called the images "disgusting and offensive" after Griffin posted the video on Tuesday, announced Wednesday that it would not invite her back this year for the Times Square live New Year's Eve special she had co-hosted annually since 2007 with CNN's Anderson Cooper.

A New Mexico casino has also canceled a performance by Griffin, who was to perform at Route 66 Casino, operated by the Laguna Pueblo tribe, on July 22.

And a commercial endorsement deal was canceled just weeks after she landed it. Squatty Potty, a Utah-based company whose products include toilet stools and other bathroom accessories, said it was suspending an ad campaign that featured Griffin.

"We were shocked and disappointed" by the video, said Bobby Edwards, the company's CEO. "It was deeply inappropriate and runs contrary to the core values our company stands for."

"I am a true supporter of free speech but feel Kathy crossed the line," Edwards added. "I regret having to make these decisions, but have no choice."

Griffin's video made Trump seethe. Tweeting on Wednesday morning, he said Griffin "should be ashamed of herself" for creating the video. "My children, especially my 11-year-old son, Barron, are having a hard time with this. Sick!"

First lady Melania Trump issued a statement of her own: "As a mother, a wife, and a human being, that photo is very disturbing. When you consider some of the atrocities happening in the world today, a photo opportunity like this is simply wrong and makes you wonder about the mental health of the person who did it."

Griffin, a comic known for her abrasive style of humor, apologized Tuesday, conceding that the brief video, which she originally described as an "artsy-fartsy statement" mocking the commander in chief, was "too disturbing" and wasn't funny.

"I went too far," she says in her contrite follow-up video. "I sincerely apologize."

The 56-year-old comic has gotten into trouble with her wisecracks before.

In 2005 she was fired from her job as an E! channel red-carpet commentator after joking at the Golden Globe Awards that child actress Dakota Fanning had checked into rehab.

Two years later, while accepting an Emmy for her Bravo reality series, Kathy Griffin: My Life on the D List, she declared that "a lot of people come up here and thank Jesus for this award. I want you to know that no one had less to do with this award than Jesus."

Then she held up her trophy and said, "Suck it, Jesus. This is my God now!"

Her appearance was during the Creative Arts Emmys ceremony, which wasn't aired live but instead was taped for later broadcast by E! Her remarks were edited, but reports of what she said drew fire from many, including Catholic League President Bill Donohue, who called it a "vulgar, in-your-face brand of hate speech."

"I have a no-apology policy," she told CBS News in 2012. "No apologies for jokes. I apologize in my real life all the time. I say ridiculous things, I make mistakes constantly. But when I'm onstage, I'm at a microphone ... it's a joke!"