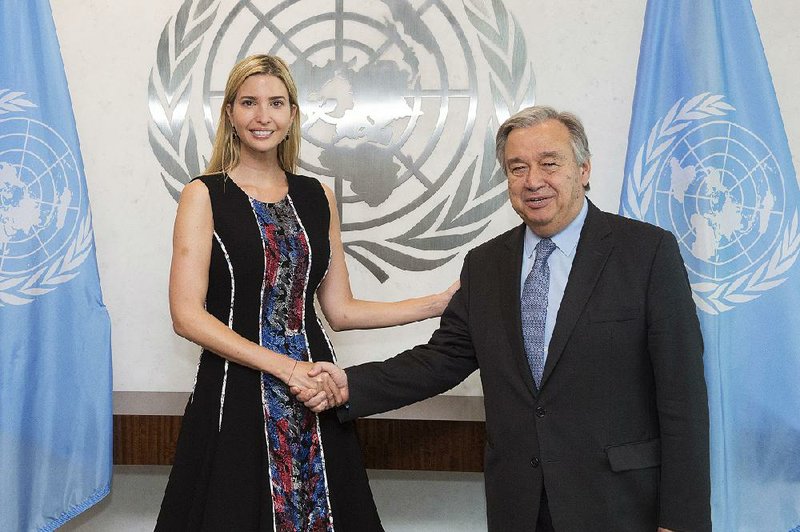 The State Department plans to scale back its diplomatic presence at this year's annual United Nations gathering of world leaders in September as a cost-saving initiative, according to four well-placed diplomatic sources.

For more than seven decades, American presidents from Harry Truman to Ronald Reagan to Barack Obama have attended the fall U.N. General Assembly general debate in New York to project their vision of American foreign policy to the world. They have been accompanied by a growing entourage of American diplomats, lawyers and technical experts who negotiate a wide range of issues, from nuclear arms treaties to climate change pacts and conflicts.

President Donald Trump does plan to address other world leaders at the U.N. General Assembly, and he will be accompanied by other top advisers, including his son-in-law, Jared Kushner, and his daughter Ivanka Trump, who stopped by U.N. headquarters Friday for a private lunch with U.N. Secretary-General Antonio Guterres.

But the ranks of professional diplomats, aides and officials who attend the event to promote American policy priorities on a range of issues will be thinned out. For now, it remains unclear precisely how large of a cut in U.S. staff is envisioned, but two officials said the State Department is seeking to keep a ceiling down to about 300 people, including everyone from the president to support staff who schedule meetings and copy speeches.

Last year, 347 U.S. officials were counted by the U.N. in the official American delegation, which included Obama and his top diplomat, John Kerry. But the full delegation, including support staff and security, was far larger, according to former U.S. officials.

The State Department and the National Security Council had not responded to a request for comment. A spokesman for the U.S. mission to the U.N. declined to comment.

While some critics fear that a truncated diplomatic presence will diminish U.S. influence on an important international stage, others, including Trump supporters and former political appointees in the Obama administration, think the American delegation could use some trimming.

Richard Gowan, a U.N. expert at the European Council on Foreign Policy, said a lighter presidential workload at the September summit might not be such a bad thing, particularly given Trump's record of aggravating diplomatic disagreements with allies in recent foreign visits. But a larger diplomatic presence could help diminish the damage.

"Trump demonstrated at the NATO and G-20 meetings that he doesn't really know how to behave on these occasions," Gowan said. Secretary of State Rex Tillerson and Nikki Haley, the U.S. ambassador to the U.N., "should be absolutely cocooning the president in staffers in the hope that they can keep him away from trouble."

Despite the scaled-back expectations, Trump is expected to stay in the area longer than his predecessor, who generally spent two working days in New York. Obama and his aides used to stay a night at the Waldorf Astoria -- until the purchase of the hotel by a Chinese insurance giant, Anbang Insurance Group. That prompted Obama and the American delegation to check out for good, fearing China might spy on them. They relocated to the New York Palace, which is owned by a South Korean conglomerate, Lotte Group.

Trump, who is expected to stay at his New Jersey golf club, had initially planned to spend 10 days, receiving foreign leaders at his club. But sources said he is likely to cut back his visit to a few days.

Tillerson, meanwhile, is expected to spend far less time engaging in diplomatic spadework than his predecessors, who traditionally spend more than a week in New York meeting with foreign dignitaries in numerous meetings.

The U.N. General Assembly debate opens this year on Sept. 19 with an address by Trump, who will speak after the U.N. General Assembly president, the U.N. secretary-general and the president of Brazil. While attention focuses on the speeches of kings, presidents and prime ministers, it also provides an opportunity for midlevel officials from the State Department and other federal agencies to participate in intensive rounds of speed diplomacy.

Most of the State Department bureaus' key assistant secretaries generally take at least a dozen staff members. But this year they have been instructed to scale back, in some cases allowing only a single aide to accompany the acting chief of the the bureau on the trip.

The diplomatic culling is being enforced by Tillerson, the former ExxonMobil chief who has shown little interest in U.N. diplomacy during his first six months on the job. It comes at a time when the White House is seeking as much as a 30 percent cut in U.S. funding to the State Department and even deeper cuts in U.N. operations.

The international preparations have set the stage for clashes over a range of priorities. Earlier this month, Haley proposed making the Syrian refugee crisis the centerpiece of the president's debut before the world community.

The plan would seek to create improved conditions for Syrian refugees in their region, reducing the need to resettle them in the West.

But the White House nixed the idea, which would have drawn attention to Trump's ban on travel for individuals from several Muslim-majority countries.

Instead, the White House identified five priorities it intends to highlight: reining in North Korea's nuclear program, resolving the Syria crisis, rallying support for a tougher response to terrorism, overhauling the U.N., and addressing the refugee and hunger crisis.