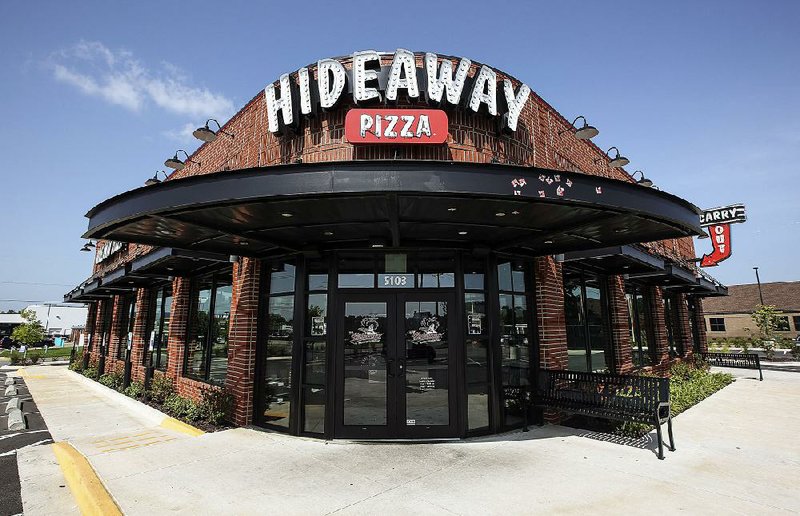 The Hideaway Pizza on Warden Road in North Little Rock opened in October.

The seller was Patmurphy Properties LLC, an Oklahoma company that paid $1.5 million for the property in December 2015.

The North Little Rock Hideaway Pizza opened in October, the chain's first location outside Oklahoma. It was the 17th location for the chain.

The company plans to open its next restaurant this year in Conway, according to its website.

The pizza restaurant chain started in 1957 in Stillwater, Okla.

Attempts to contact executives at Hideaway Pizza were unsuccessful.

The center will include an on-site bank, pharmacy, gift shop, salon and barber, Lewis said.

The upscale apartments will be rented on a month-to-month basis, Lewis said.

The center will be the first in Arkansas for the company.

The purchase was financed by a $504,000 mortgage with Bank of the Ozarks that matures in 2022. Robert and Laura Smith, owners of BTC Rentals Two, took out the loan.

The Smiths have rental properties around the state, but this is their first in Little Rock, Robert Smith said. He has three single-family rentals in other areas of the state, he said.

The Smiths publish neighborhood newsletters around the city, he said. They also have a farm in west Arkansas.

He decided to buy the Spruce Street property because "we like the area," Robert Smith said.

"We like the fact that it is young professionals renting that particular property," Robert Smith said.

The property has four regular apartments and a loft apartment, he said.

KLS Leasing LLC, an affiliate of the Walton Family Foundation, filed a corrected deed last month to make a change to a deed that was filed originally in April. The change was to remove the name of the treasurer of KLS Leasing.

KLS paid $440,000 to buy the abandoned Mitchell Elementary School at 2410 S. Battery St. as well as nearby buildings from the Blevins Family Trust. Mitchell Elementary, which was built in 1908, was formerly in the Little Rock School District.

The three-story building, with more than 42,000 square feet, has been vacant since 2003 when students moved to other schools ahead of an announced renovation. The school district did not refurbish the building and closed Mitchell in 2005.

The Walton Family Foundation plans to lease the school to ScholarMade Educational Services Inc., which is seeking approval to teach 520 students at a charter school on the property. Renovation on the buildings will take about a year.