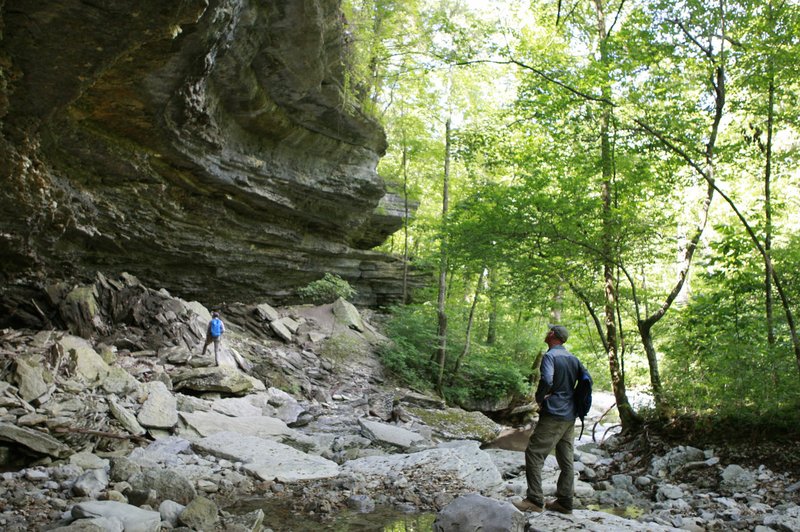 Isaac Ogle (right) and his wife, Jennifer, explore a bluff shelter along a spring-fed creek Sunday in the Devil’s Eyebrow Natural Area in northeast Benton County. Jennifer Ogle is a land management specialist with the Arkansas Natural Heritage Commission, one of several groups that manage the area and are expanding it under the regional Open Space Plan. - Photo by Dan Holtmeyer

The plan to save the region's most essential open and natural areas has helped bring hundreds of acres under public and nonprofit protection in the past two years, and it won't stop there, several experts and advocates said. 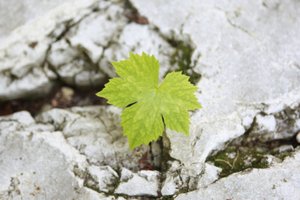 Photo by Dan Holtmeyer
A solitary leaf pokes out of rock along a creek Sunday in the Devil’s Eyebrow Natural Area in northeast Benton County. The area is home to hundreds of plant species, including many that are rare in Arkansas. 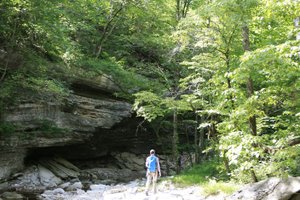 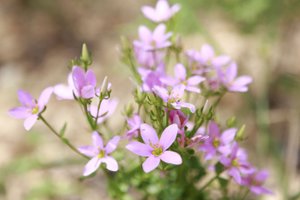 Photo by Dan Holtmeyer
A cluster of rose-gentian flowers bloom Sunday along the trail in the Devil’s Eyebrow Natural Area in northeast Benton County. The Arkansas Natural Heritage Commission and other groups manage about 12 miles of rugged trails in the area.
Document

Benton and Washington counties' leaders in early 2016 endorsed the Open Space Plan, a detailed map of the parks, woods, streams and pastures that hold the most value to the region's people and wildlife. Since then, cities and other groups have bought or been given at least 1,000 acres to protect them from heavy development, said Elizabeth Bowen, project manager with the Northwest Arkansas Regional Planning Commission, which organized the plan.

The Northwest Arkansas Land Trust protects tracts of land throughout the state’s northwest corner and is holding the second of two workshops on how preservation of open spaces and natural areas can fit in with development, farming and other human activity in the area.

To register: Go to www.2017washingtoncountywinwin.eventbrite.com

To find the Open Space Plan and see its maps of priority areas, go to nwadg.com or nwarpc.org.

The areas are small compared to counties that stretch over hundreds of thousands of acres, and the Open Space Plan doesn't get all of the credit, Bowen and others said. But it has become a useful tool in a mission that's becoming increasingly urgent amid the metropolitan area's rapid growth.

"Shaping the future of our region, it's kind of now or never," Terri Lane, director of the Northwest Arkansas Land Trust, said at the group's workshop earlier this month emphasizing how development and preservation can go hand in hand. The trust restores and preserves wetlands and other areas with the landowners' blessing.

The tracts range in size from about an acre to more than 400 acres adjacent to the Devil's Eyebrow Natural Area, roughly 3,000 acres of rugged forest and rare plant species in northeast Benton County. Those acres are in the process of being purchased, said Darrell Bowman, who directs the Arkansas Natural Heritage Commission.

All of the new properties are given or sold by their previous owners -- the Open Space Plan and preservation by groups like the land trust are entirely voluntary.

The newly protected land will help bridge Devil's Eyebrow's two sections, allowing wildlife to travel more freely back and forth, said Bowman said. He said the additions likely wouldn't have happened, at least not now, without the Open Space Plan.

"That definitely helped us bridge the gap to partners we might not have been talking to otherwise," Bowman said last week. "We've been able to bring in more partners to conserve that area."

The commission co-owns most of Devil's Eyebrow with the Arkansas Game and Fish Commission. The area's current outline and its expansion are an achievement of a mosaic of cooperating groups, as is typical for local protected lands, Bowman said.

The Walton Family Foundation, another nonprofit group called The Nature Conservancy, the federal and state park services and other groups all helped cover the hundreds of thousands of dollars needed for the expansion, Bryan Rupar, the commission's land acquisition and stewardship chief, wrote in an email.

"We knew it was unique -- we knew it was the kind of area we need to set aside in conservation," Bowman said of Devil's Eyebrow in general.

Other high priorities in the Open Space Plan include established areas like Devil's Den State Park in south Washington County and Hobbs State Park-Conservation Area near Beaver Lake, which together include roughly 15,000 acres. Nearly every stream and creek in the area and much of Fayetteville are also highly valued.

The value in open space

Forests, wetlands and other green areas provide a countless array of services, Bowman and other advocates say. They clean rainwater and slow its floods. They support fish, birds, game and other wildlife, including species not found in other states or even other parts of Arkansas. They absorb carbon dioxide. They give humans places to hike, play and relax.

And while many such areas are relatively untouched, open spaces are still valuable when they're integrated into people's built environment as parks or trails or fields, said Seth Mims, president of Specialized Real Estate Group in Fayetteville.

"We have come to believe that incorporating nature is one of the most important things we can do," Mims told the land trust workshop earlier this month.

He said homebuyers want those open spaces, giving the homes nearby more value -- a pattern supported by research from the U.S. Environmental Protection Agency and others. Studies going back decades have found trees and other greenery, even through an apartment or hospital room's window, can improve several measures of health.

Specialized always builds its homes near a trail, Mims said, and many properties are near a community garden.

"People love it," he said, urging other developers to let more of nature into their projects.

Gentry, a city of about 4,000, bought about 12 acres near the town's center for $80,000 in April to expand a city park system that needs more room, Mayor Kevin Johnston said. Another 14 or so adjacent acres could soon follow. The whole piece could be home to sports fields, mountain bike trails or other amenities, though the master plan hasn't been decided.

"I think it's extremely important, and I hear that echo throughout the region," Johnston said of holding on to open spaces, adding the land is mostly surrounded by subdivisions. "We welcome some of that growth, but we also don't want it to consume everything that we have."

Groups like the Illinois River Watershed Partnership and Beaver Watershed Alliance work with thousands of individual landowners to protect the water quality of Beaver Lake -- the region's drinking water -- and all of the area's rivers. They can help a farmer build buffer areas of grass and trees near streams on the edge of a pasture, for example, to help catch sediment and fertilizer.

"The research shows that if you have 2 inches of grass, it will slow down rain 70 percent," said Ron Morrow, a cattle farmer west of Fayetteville who's retired from the Arkansas Natural Resources Conservation Service, a division of the federal Department of Agriculture.

Morrow practices and preaches rotational grazing, moving a herd from one pasture to another instead of letting them munch the grass to dirt. The rivers benefit and so do the farmers, who gain healthier, more nutritious food for their animals, he said.

The Open Space Plan states it's not meant to protect all of the area's highest-priority lands nor to neglect lower priorities. Protecting such a large amount of land would require hundreds of millions of dollars, far beyond the capacity of every local conservation group, Nicole Hardiman, the Illinois River partnership director, told the land trust workshop.

The plan includes steps toward a possible sales tax of a fraction of a cent for the region to continually pay for the plan's efforts with minimal pain on the population. Bowen with the regional planning commission said the group has the necessary grant money to begin a feasibility study into that option and needs one of the two counties to request the study for it to move forward. She plans to speak to the county governments in the next month or two.

"I haven't had anyone say this isn't a good idea, so I think we're off to a good start," Bowen said, referring to the overarching Open Space Plan and the newly protected land so far.

Meanwhile, land protections will continue one landowner and one project at a time with piecemeal public and private support. The Walton foundation, for example, gave more than $3 million toward Fayetteville's Kessler Mountain preserve and park and the trail connecting it to the rest of the city.

The park opened last year and is "a huge win for the region," said Jeremy Pate, a former development director for the city who represented the foundation at the land trust workshop.

"We also see ourselves as a convener" of potential partners, he said.

"It's so exciting to see it actually coming to fruition now," she said of the plan.