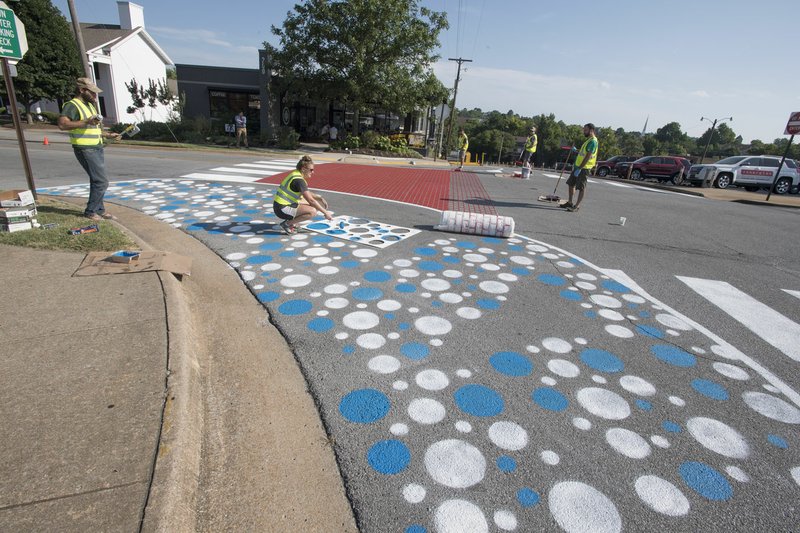 Volunteers work Sunday at painting new crosswalk and curb extensions at the Church Avenue intersection with Center Street. Fayetteville has officially launched its Tactical Urbanism program where residents can put together a plan to build a crosswalk or bike lane or decorative plants or nonpermanent road barrier of some kind and submit it to the city.

FAYETTEVILLE -- Residents who want to take care of their neighborhood's immediate concerns, such as safely crossing the street, slowing down cars or creating bicycle lanes, now can do so on their own with city approval. 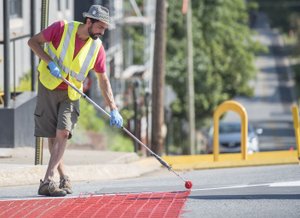 Photo by J.T. Wampler
Michael Ward of Fayetteville paints a new crosswalk and curb extensions at the Church Avenue intersection with Center Street.

For an application, guide and more information, go to: fayetteville-ar.gov/tacticalurbanism

Other national examples include:

• The Park(ing) Day event in September has residents around the country turn otherwise empty parking spaces into pop-up parks.

• Walk [Your City] lets users design their own street signs and get them delivered to place in their neighborhoods.

The term is largely attributed to urban planner Mike Lydon, whose Street Plans Collaborative held a workshop on the topic for city officials in November. Several volunteers put together a crosswalk and bike lane in front of Nadine Baum Studios, crossing from the trail to West Avenue during the workshop.

In January, volunteers replaced the four-way stop at Spring Street and School Avenue with a roundabout that was removed in March. City staff concluded the roundabout eased traffic for bicyclists traveling between the Razorback Greenway and downtown. However, motorists generally failed to yield, creating potentially unsafe situations with pedestrians.

The latest approved project placed crosswalks and curb extensions to Center Street and Church Avenue, in front of Arsaga's. Michael Ward, a developer, said he walks across the intersection regularly and has noticed problems for pedestrians. The project is scheduled to stay there until fall.

"There are no crosswalks there. There are wide lanes and a big turning radius for cars," he said. "Cars tend to roll through the intersection. Sometimes they stop and sometimes they don't. It's unclear who really should be walking and who should be driving."

The city started beta testing the program after getting a handful of inquiries following the November workshop, City Engineer Chris Brown said. Ward's project was born from that test phase.

Community Center summer campers will help design the crosswalks. A curb extension on the west side of Mill Avenue and Rock Street will reduce a 55-foot turning radius to 20 feet, slowing down cars as they move. Volunteers also have asked for a sidewalk on the north side of Rock Street leading to the center.

The crosswalks, curb extension and stop signs will be installed the morning of Aug. 11.

A project has to meet certain criteria to gain approval. Nothing can go on a state highway. Putting paint on a major street or public right of way is iffy. Enough room has to be left for emergency vehicles to maneuver. Residents make their own schedules and have to buy their own materials. An online guide suggests materials, ranging from hand-painted signs to hay bales.

City employees in engineering, transportation and parking, along with police and firefighters, all will put eyes on a more involved proposal before its approval or denial, Brown said. Simple works like painting the street or a sign likely will get quick approval.

Once the project is installed and its approved time frame ends, three outcomes are possible. It may turn out the idea didn't really work and it won't return. Or, if it's a simple job, the residents can keep it going with regular maintenance. Lastly, if the project succeeds and garners positive feedback, it may make the city's work list and re-emerge with permanent materials.

"It's a good way to test out things that may seem a little out there," Brown said. "But, if they work, and they don't cause a problem, maybe we'll implement them."

Anyone having trouble designing a site plan or who otherwise has questions can call the city's Engineering Division for help.

The process seems simple enough so that any resident could put together a proposal and get something approved, Ward said. It also goes a long way in community-building, he said.

"I would encourage everyone to examine what they think could improve their own neighborhood and put in an application," he said. "Worst-case scenario is it gets denied and you go talk with staff about how to get it approved."