Slaying the 'math monster': It’s not about numbers, it’s about learning how to think 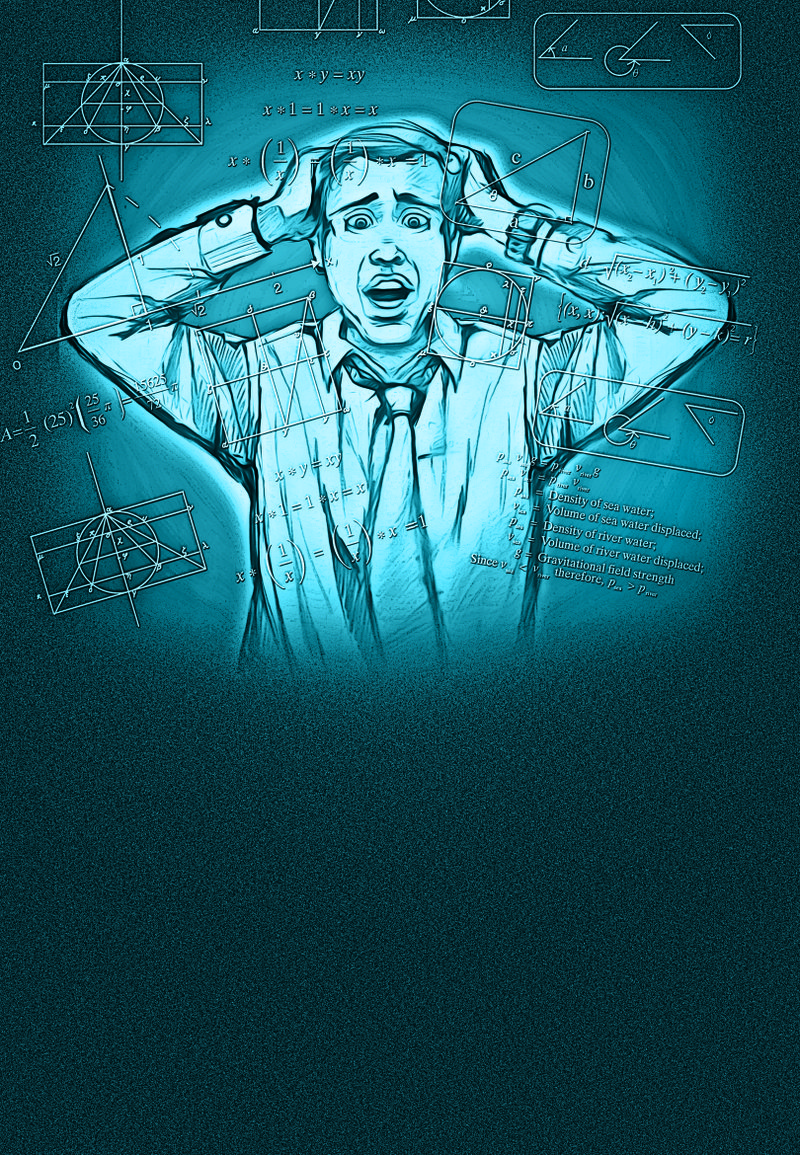 The tweet that raced around the internet before truth had time to put on its shoes was this: In a delicatessen in Pittsburgh, a mysterious sign had appeared adjuring customers to "Please Refrain From Discussing Mathematics While Waiting in Line."

People in Pittsburgh couldn't find this deli (because it's in Connecticut). Nevertheless humorous folks felt free to decide it was a real sign posted by a real lunchman tired of having his totals second-guessed by know-it-alls. Wasn't it?

Well, no. Nothing like that (see accompanying story). But the thing is, that explanation was plausible. These cashiers these days, they can't do the math, right?

But who can? Math is too hard. Only numbers-people can do it.

Again, not true. But as a statement of a common belief? Mmm, could be.

Denise LeGrand sees evidence in restaurants, in stores. Maybe she's out with friends and it's time to split the bill, work out the tips. "It scares people, problem-solving in general," she says.

Before cash registers made deducting discounts a matter of knowing which icon to tap, she often helped sales clerks tally her bill. Meanwhile, she was thinking, "How do they take care of their finances? How do they do a budget?"

But then, LeGrand is one of those numbers-people. She runs the Mathematics Assistance Center (MAC) at the University of Arkansas at Little Rock and teaches calculus in the department of mathematics and statistics. And by the way, she's dismayed by how people react when they learn her profession -- "You're a math teacher? Oh, I hated that."

"I don't think I've ever encountered somebody that said they like math," she says sadly.

Sam Lawhorn, a recent UALR graduate with a bachelor's degree in mathematics, is dismayed that it's respectable to be incompetent with numbers -- people nearly brag to one another about it.

But "it's socially acceptable to say, 'I hate math,'" LeGrand agrees.

Meanwhile, demand is rising around the globe for professionals in fields related to science, technology, engineering and mathematics (STEM). That's where the jobs are going. To meet the need for qualified workers, "many governments and private organizations have revamped STEM education and promoted training to enhance math and science skills among students and workers," researchers from the University of Chicago write in a report published in the February issue of Current Directions in Psychological Science (see bit.ly/2sMOXzT).

Such efforts, they write, typically focus on feeding students more math and science knowledge faster or better. But after looking at data from 64 countries where 15-year-olds take the Program for International Student Assessment's tests in math, science and reading skills, the researchers suggest that apprehension of math -- math anxiety -- plays a big enough role in the ability to master STEM subjects that it needs to be addressed.

Other studies have found that test-taking provokes anxiety in general, but math anxiety appears to be a force by

itself. Studies have seen test takers' heart rates elevated by math but not by other subjects, for instance.

Even students who do well in math classes can be gripped by enough anxiety they make errors. Anxiety about math makes people bad at math, researchers say.

Allaying anxiety is one of LeGrand's missions as director of the Mathematics Assistance Center -- where university students in any degree program can receive one-on-one or group tutoring. Student tutors offer other students help with homework, study skills, test prep and general math appreciation.

This lab, on the fourth floor of the Engineering, Technology and Science building at UALR, is a suite of fluorescent-lighted rooms equipped with computers. The center has a "loud side" for group study and tutoring and a "quiet side," for struggle -- or play -- in silence. It has a faculty-student lounge, toys, couches, white boards, inspiring slogans.

You're only a failure when you stop trying.

If Tetris has taught me anything, it's errors pile up and accomplishments disappear.

The difference between genius and stupidity is that genius has its limits.

"Some of those have to be erased," LeGrand says.

Lawhorn volunteered as a MAC tutor during his four undergraduate years, and he also tutored for pay at more than one Mathnasium store. He and LeGrand see patterns in how math-hating adults think:

• Mathematics is about memorizing formulas.

• There are "math brains" -- good with numbers -- and then there's everybody else.

• Success means getting the right answer and there is one right way to get that answer.

All of those are bad attitudes, they suggest, adding, "Stop it."

MAC tutors give students advice on relaxation and self-calming methods, like deep breathing. They stress the benefit of not waiting until the last minute to tackle a subject -- do your work, in other words. Put in some time.

Also, they advocate for better attitudes:

Failure is a tool. Free your mind to learn from failure.

Also, "memorization is not what you do in math," LeGrand says. "You have to learn the process." Certainly, knowing or at least recognizing a formula can help, but once students understand why formulas work, they can reinvent them as needed.

Memorizing formulas doesn't help anyone to be more logical.

"People associate mathematics with numbers, naturally," Lawhorn says. "They think it's the study of numbers. But it's really more the study of patterns. I think the human brain is wired for mathematics in general.

By the way, LeGrand says, neither she nor Lawhorn were born "naturally good" at math. They have to study and think. She reviews like crazy just before she teaches a class. But the deal is, needing to work at math doesn't make them feel like failures. They have learned to enjoy the effort.

"You will find that with most mathematicians," Lawhorn says. "If they're not stuck on themselves, they'll tell you 'I had to work at that.'"

Like other subjects, math does have a special vocabulary and a grammar different from standard grammar. LeGrand stresses that doing well in math requires reading -- patiently -- just as in other subjects.

But math is different from other subjects in how it builds upon itself. A history student doesn't need to know Arkansas history to be able to read about the history of Little Rock. In contrast, counting your toes comes before making change from a dollar comes before trigonometry. Each topic adds skill sets that are needed later.

LeGrand doesn't define success as getting the right answer. Success is the delight of figuring out how to get that answer.

By the way, Lawhorn notes, "One of the things I tell people in the lab is 'You're not necessarily expected to remember everything you've ever been taught.' Yes, we hope that you remember all of these little things, but you're not going to if you're not using them regularly.

From this, two deductions:

• Having trouble remembering the quadratic equation formula doesn't mean you're not a "numbers-person."

• To remember your math skills, use them more often.

A great way to do that is by playing.

Use the computer applications called "apps" to play math games, even kid-level games, on your computer, smartphone or other mobile device.

• The free app Bedtime Math (bedtimemath.org) offers a fun fact followed by math quizzes at different levels. On June 27, the questions involved goats being used as lawn mowers; the app linked to a video of 800 goats munching the lawn of Lawrence Berkeley National Laboratory.

• More challenging is Euclidea Geometric Constructions (euclidea.xyz), another free app with a website version. Based on classical line and compass problems, it can be played through 120 levels, from basic to very, very hard.

• Mandala coloring books are marketed as calming for adults. "You can make your own mandala patterns with a drawing ruler and a compass," Lawhorn says. "That's a handy thing for when you're crying because you're so anxious."

• Khan Academy (khanacademy.org) is a free tutoring website with videos and interactive games for subjects from kindergarten to college.

• LeGrand notes that dancing and music are mathematics in motion. So ... dance, play an instrument.

• Sudoku, KenKen, magic squares, chess and checkers are "recreational math" -- noggin-nudgers that use the same skills of logic and deduction needed for advanced math, without requiring any knowledge of advanced math.

• Martin Gardner (1914-2010) wrote a long-running column of such amusements for Scientific American. The website "Martin Gardner Puzzles" compiles some of his best: bit.ly/10qRcrR.

• Search YouTube for videos about Gardner's origami "hexaflexagons." Here's a great one: bit.ly/1ijAr8g.

If all else fails, just say the word "hexaflexagons" over and over. 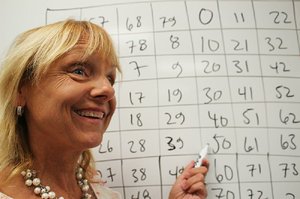 Photo by Celia Storey
Denise LeGrand says doing “recreational mathematics” like a magic square can be fun even if you never apply those mental skills to math. 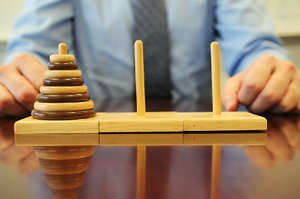 Photo by Celia Storey
Sam Lawhorn says that the Tower of Hanoi, a traditional puzzle from China, is a math toy.

Print Headline: Slaying the 'math monster': Don’t be anxious: It’s not about numbers, it’s about learning how to think