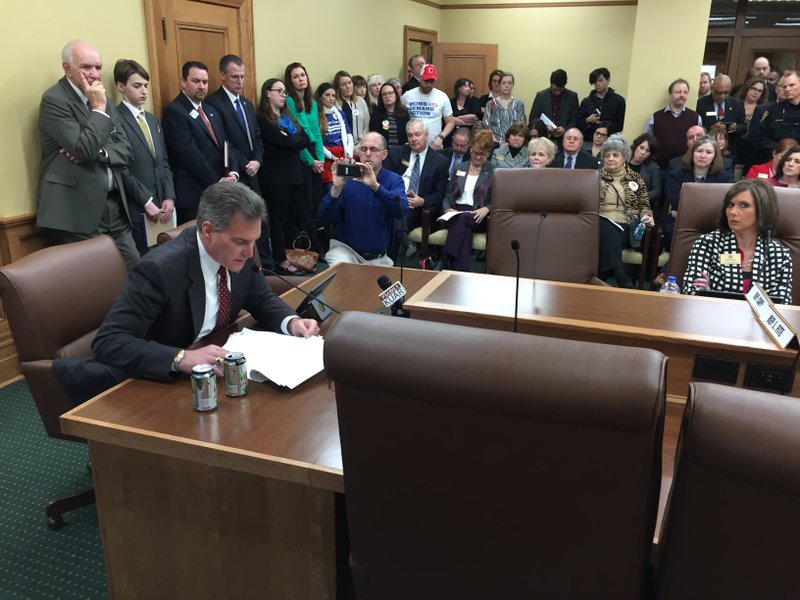 A panel of state lawmakers advanced a bill Tuesday that would require public universities to allow faculty and staff with concealed carry permits to carry firearms on campus.

In a roll call vote taken around 12:40 p.m., legislators on the House Judiciary Committee voted 12-5 to pass the bill to the full House.

A group of state lawmakers delved into a measure Tuesday that would require public universities to allow faculty and staff to carry firearms on campus if they have a concealed carry permit.

In front of a House panel of legislators, Rep. Charlie Collins, R-Fayetteville, advocated for the bill that he says will discourage mass shootings on college campuses.

Lawmakers and members of the public were still commenting on the issue as of 11:50 a.m. Tuesday.

Collins began by listing the dates and death counts of recent school shootings across the United States. He said House Bill 1240 would not be a “magic pill” and eliminate these shootings. Rather, he said, it would be an additive measure to help deter the violence.

“My goal is protecting our loved ones on college campuses,” he told the committee.

The lawmaker told the House Judiciary Committee the legislation does not diminish the role of law enforcement on college campuses or substitute staff and professors for police officers in any way.

“No idiot would propose that,” Collins said.

Even though law enforcement responses were often prompt, the majority of mass shootings are stopped by other factors such as intervention from teachers and administrators or surrender from the shooter, the lawmaker said, citing a federal study.

The representative also listed the requirements to obtain a concealed carry license, including undergoing a background check and a training course. The small percentage of staff members and professors who would carry a firearm on campus will have to go through that training, which emphasizes self-defense, he said.

In 2013, Collins sponsored a similar bill that gave universities a choice on whether or not to allow staff members to conceal carry guns on campus, the Arkansas Democrat-Gazette reported. All of the state's public universities opted out.

After he made his case, legislators asked Collins if the bill would take away local control from university officials who have been allowed to make these decisions for their own campuses.

Collins responded by saying his bill makes the decision even more local by giving the choice to the individual. He added that concealed carry license holders “stroll the streets” while armed and travel throughout Arkansas with little issue, as far as he knows.

Rep. Charles Blake, D-Little Rock, asked Collins about the cost of the legislation. Blake said other states that enacted similar rules have incurred millions of dollars in expenses.

Collins responded by saying the states Blake referred to had spent the majority of that money on gun safes because the legislation allowed firearms in some spaces but not others. Collins said he rejects that type of “wasteful spending” and predicted Arkansas universities would not experience those types of costs.

A vote is expected later Tuesday.