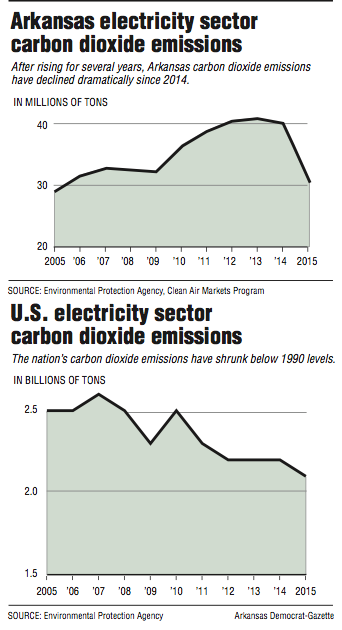 Electrical energy experts in Arkansas expect natural gas to continue to be a greater focus than coal in years to come, which would lead to a drop in emissions from electric power generating facilities.

While congressional Republicans and President Donald Trump have supported ending federal regulations that target coal, officials with the Arkansas Department of Environmental Quality, Entergy Arkansas and the Arkansas Electric Cooperatives Corp. maintain that it's unlikely coal-fired electric power generation will resurge because there's an abundance of low-cost natural gas.

Entergy Arkansas officials told the state Public Service Commission in 2015 that they plan to increase output by 2,000 to 6,000 megawatts through 2035, all by using natural gas, solar and wind power.

The company will stick with that plan, spokesman Julie Munsell said recently, noting that a small share of coal -- about 4 percent -- was used in 2015 to produce electricity. The company has natural gas facilities, and emissions-free nuclear and renewable sources. The company couldn't provide 2016 figures but expects them to be similar to 2015's.

"Based on the conferences I go to, all the experts are saying there is a huge, almost unlimited amount of natural gas with all the shale production going on this country," Byrd said. "They don't foresee any time in which natural gas will go back up to where it was [in terms of price]."

While coal prices haven't changed much in recent years, the U.S. Energy Information Administration notes in its Short-Term Energy Outlook published in November that natural gas prices have decreased and in recent months were lower than the cost of coal on a per-megawatt-hour basis.

The agency forecasts prices of natural gas to increase in the short term because of growing U.S. consumption and increased exports to Mexico, opening a window for coal to provide a greater share of U.S. electricity than it did in 2016.

In its long-term projections, issued in June, and its short-term outlook, published later, the agency foresees natural gas continuing to provide a bigger share of electricity than coal through 2040. The Energy Information Administration also predicted short-term increases in renewable energy because of declining costs and the extension of certain federal tax credits.

Natural gas prices will be low and stable in the long term, the report said, because of abundant resources, improved drilling technology and increasing demand.

If projections hold, electricity-related air emissions should continue to decrease.

Natural gas energy emits about half the carbon dioxide of coal, and nearly negligible amounts of sulfur dioxide and nitrogen oxide, said officials with the Arkansas Electric Cooperatives Corp. Coal-fired plants emit far more of each, they said, which means such plants require expensive environmental controls.

Emissions from regulated facilities in Arkansas have decreased in the past decade, mostly because of reductions in the transportation sector, according to a report compiled by the Arkansas Department of Environmental Quality.

A recent shift from coal-fired electricity production to natural gas has reduced carbon dioxide emissions and stands to continue to improve air quality over time, according to the department.

Such emissions from large industrial facilities and power plants decreased -- in more modest amounts -- in every category except lead and ammonia. Lead is emitted in small amounts when compared with the other gasses, and ammonia is nearly all emitted by nonpoint sources, such as building structures and agriculture.

Except for ammonia and volatile organic compounds, such substances are regulated under the National Ambient Air Quality Standards rule. For its report, the Environmental Quality Department collected data from the EPA's National Emissions Inventory. Because the data are compiled every three years, the latest year available is 2014, when natural gas prices were higher and coal use was greater.

In Arkansas, coal use in 2015 was so low that the related carbon-dioxide emissions dipped below the threshold the state was required to meet under the federal Clean Power Plan, which was implemented by the EPA in 2015 and seeks to reduce carbon dioxide emissions by targeting emissions from coal-fired power plants.

The dip is in contrast to increases in carbon dioxide emissions as recently as 2012. The state recorded a 35 percent increase in emissions from 2005 -- when a third coal-fired plant opened in Osceola -- until 2012.

The state opened a fourth coal-fired plant in December 2012. That plant is the John W. Turk plant in Fulton. It was built to meet updated environmental regulations, according to officials with the Arkansas Electric Cooperatives Corp., which owns about 12 percent of the plant.

The Clean Power Plan is currently on hold. Last February, the U.S. Supreme Court issued a stay in a lawsuit, in which Arkansas is a plaintiff, halting the plan's enforcement.

For example, federal regulations have pressured trucking companies and utilities to crack down on emissions, officials said. Meeting those regulations increased costs, but the companies are seeing savings from their now more-fuel-efficient vehicles. And, utilities have invested in power-generating technologies such as natural gas, wind and solar.

"There's a lot of talk about rolling back [federal] regulations, but we've not necessarily seen any evidence of that," said David O'Neal, director of safety services at the Arkansas Trucking Association.

Also, the state could put the $13.9 million it expects to receive from an EPA settlement in a Volkswagen emissions case toward further reducing vehicles' nitrogen oxide emissions.

As for utilities, they have been affected by federal rules that target cross-state air pollution, ambient air quality, and mercury and air toxins.

Along that vein, utilities, government and environmental groups are keeping a close eye on the Regional Haze Rule, a federal regulation that would affect power plants but has yet to be implemented in Arkansas.

The Regional Haze Rule is the result of requirements passed by Congress in the 1990s to implement parts of the Clean Air Act. It sets requirements for visibility at 156 national wildlife areas across the country and allows the EPA to require emissions reductions at industrial facilities that emit chemicals -- such as sulfur dioxide and nitrogen oxide -- and contribute to haze.

In response to the EPA proposed federal implementation plan regarding regional haze in 2015, Entergy Arkansas proposed closing its 1,700-megawatt White Bluff power plant just outside Redfield. The EPA did not consider that proposal in its final implementation plan, which is being challenged in court.

State leaders have been optimistic that a federal court will decide to allow the state Department of Environmental Quality to create its own plan to meet the Regional Haze Rule. The state produced a plan in 2012, but the EPA partially rejected it and the state never submitted a new one.

State officials argue that Arkansas is already on pace to meet the 2064 goals set in the Regional Haze Rule and doesn't need any intervention.