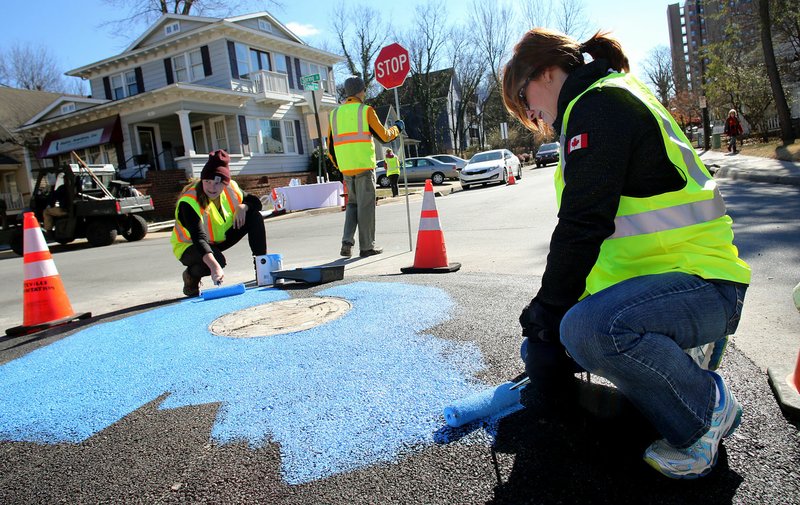 Bonnie Adams (right) with Travel with Care and Rachel Schaffner, project coordinator for Fayetteville’s Sustainability Department, paint the interior of a new mini-roundabout Thursday at Spring Street and School Avenue. The mini-roundabout is a pilot project to exemplify the concept of tactical urbanism. The project is similar to the temporary crosswalk in front of the Walton Arts Center’s Nadine Baum Studios.

FAYETTEVILLE -- Street design should adhere to the needs of an area and Tactical Urbanism provides a low-cost, quick fix to many of the city’s traffic concerns, according to city transportation and engineering officials.

A group of about a dozen city employees and volunteers on Thursday installed a temporary roundabout at the intersection of West Spring Street and South School Avenue.

The intersection, next to the Spring Street Parking Deck and city parking management office, the Highroller Cyclery bicycle shop, residences and other businesses downtown, presented issues as a four-way stop, said Dane Eifling with the city's Sustainability and Resilience Department.

Give the city feedback here with a survey on the roundabout at West Spring Street and South School Avenue.

Eifling did an hourlong traffic count at the intersection and saw several cars, scooters, skateboarders, bicycles and pedestrians roll through because of the spot's poor sight distance. Seeing oncoming traffic often required going past the stop signs, he said.

"By the time you get all the way that far in, you're like 'Why stop now? I'm in the intersection,'" Eifling said. "A yield just makes a ton of sense."

Transportation crews on Thursday morning removed the stop signs at the four-way intersection, replacing them with yield signs indicating the roundabout. A mound in the center of the intersection required elevating a manhole just above the surface.

Roundabouts can reduce traffic accidents, and more importantly, reduce the severity of those accidents, City Engineer Chris Brown said. Having traffic flowing slowly at an angle can result in a side-swipe rather than a head-on, T-bone or rear-end collision, he said.

The afternoon group painted the mound a shade of aqua blue, added crosswalks to the south and west sides of the intersection and painted yield indicators on the street just before the entrance of the roundabout.

"Fayetteville is a fun and funky place and our streets can reflect that," she said. "It doesn't have to just be the functional bare minimum. We can still have fun with it and make it just as safe as it needs to be."

The city plans to take down the installation in March before the Joe Martin Stage Race, but if the pilot project proves a success, it may stay, Brown said.

Normally, a roundabout requires work on curb and grading and thermoplastic on the crosswalks. Crews will have to make a few adjustments if the roundabout becomes a fixture, Brown said.

That all depends on whether travelers like the idea. The city has posted an online survey to get feedback.

Travel with Care NWA, a regional campaign of BikeNWA, partnered with the city on the project. Bonnie Adams of Travel with Care NWA said the intersection now grabs attention with clearly marked pedestrian crossings and signs with information for multimodal travelers.

"Any time some sort of safety message can be put out there for other people to hear and see is priceless," she said.

Sam Slaton, with BikeNWA, said he viewed a roundabout as preferable to a four-way stop because it forces travelers to be more aware of their surroundings.

"They're more conscious of the fact that they're approaching an intersection in which they're going to have to make certain negotiations," he said. "It's not just necessarily, 'I stop, you stop, whoever got there goes.'"

The project served as part of the city's effort to explore the concept of Tactical Urbanism. The term refers to low-cost, temporary changes to city streets residents can use to address traffic or safety needs in their neighborhoods.

The city took part in a Tactical Urbanism workshop in November at Nadine Baum Studios in which a group of about 20 painted a crosswalk in front of the building. Miami-based Street Plans Collaborative hosted the event.

Eifling acknowledged the city doesn't always have the staff or time available to address residents' concerns, such as speeding or walkability in their neighborhoods. Tactical Urbanism provides a possible solution.

"We're really hoping that this kind of mentality or these kinds of projects will be more citizen-led in the future," he said. "This isn't really normal for us and we don't want it to be our new normal necessarily, but it is cool."

City staff and department heads need to have more conversations about safety and maintenance when it comes to Tactical Urbanism, Brown said. However, some sort of permitting system allowing residents to essentially take matters into their own hands could keep the phones at City Hall from ringing as much.

Material for Thursday's project probably cost less than $1,000, Brown said. City officials want to see the installation's effect and learn what they can do for the next similar endeavor.

"It's something that was done quickly, for one, and there wasn't a lot of design time," Brown said. "It's a low-cost treatment and it's one that hopefully could be duplicated in other areas."