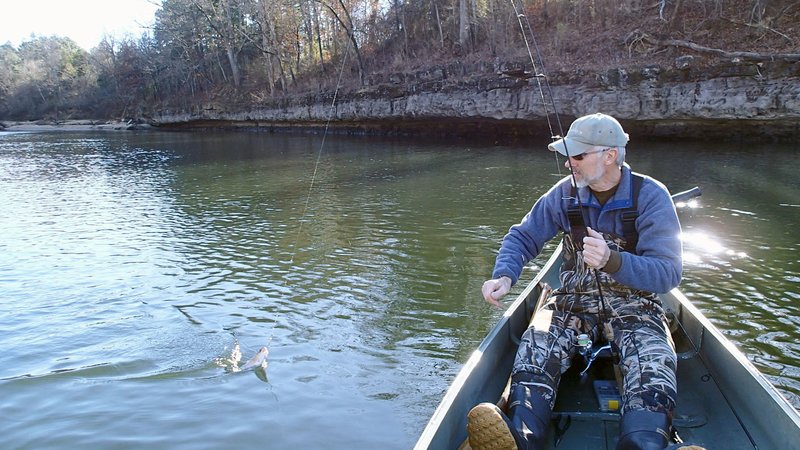 Bruce Darr catches a rainbow trout Dec. 30 from the White River below Beaver Dam. Darr serves on the state council of Trout Unlimited.

Choices for wintertime float trips are limited, but one waterway is dependable in any season.

The White River below Beaver Dam always has enough water to drift down. The stream is ideal for canoeing or kayaking all year. Rainbow and brown trout swim in the river that is cold, even in summer, because the water comes from deep in Beaver Lake.

The Arkansas Game and Fish Commission is conducting a survey of anglers who fish the White River below Beaver Dam. The survey began in November and will last a year, said Christy Graham, trout management supervisor.

A survey taker asks anglers what they think of the fishing on the Beaver tailwater, what kind of tackle they use, how many trout they’ve caught and how long they’ve been fishing. Interviewing is done at random days during the week and on weekends during daylight hours.

The survey gives Game and Fish an idea of angler satisfaction, catch rates and if any management changes are needed.

Sometimes the water's too much, mainly for fishermen on shore. The peaceful river rises quickly when electricity is generated at Beaver Dam. The current picks up. High water makes bank fishing harder, and a lot of anglers head home.

A loud horn sounds at the dam when one or both generators are ready to crank out the power. It can be heard far downstream to let fishermen and paddlers know the water will soon rise.

High water was a welcome sight Dec. 30 on the cusp of a new year. This float trip promised a good ride on the peppy river, and hopefully some trout for dinner.

The sunny Friday was one of those bonus winter days, 55 degrees with nary a puff of wind. Bruce Darr of the Rogers area took a seat in the bow of the square-stern aluminum canoe. His fishing buddy in the stern shoved the boat off into the current. Seven miles of lovely water, scenery and trout awaited downstream.

The current wasn't supposed to be here. The power generation forecast from the Southwest Power Administration predicted no generation for the midmorning start. It appeared from the level of the river that both generators were churning out the kilowatts.

Darr was geared up with a box full of jigs, small spoons and minnow-sized crank baits to entice the trout. Getting that first fish in the boat is always a relief, and Darr caught a spunky 10-inch rainbow trout a mile into the drift.

Fishing was the focus of the trip, but scenery and wildlife are stars of a float from the dam to Houseman Access. High bluffs cloaked in cedar trees are beauty to admire. Great blue herons, young and adult bald eagles and various duck species escorted us. Darr was happy to see flocks of golden-eye ducks, his favorite in the world of waterfowl.

Funny though. Fishing was a tad on the slow side. Darr hadn't felt another bite since that first trout.

They could guess why when the pair beached the canoe for a break on a gravel bar. The river level was falling. Generation had evidently stopped.

Hip deep in the river, Darr wade-fished a pool of slack water inside a bend in the river without a strike.

"This eddy looks like the perfect spot," he said. "Those fish can get out of the current and look for any food that floats by."

Darr, who serves on the state council of Trout Unlimited, prefers to fish rising water more than falling water. The slowing current and falling water level kept up all the way to Houseman Access.

Fishing picked up in the final two miles between the U.S. 62 bridge and Houseman Access. Darr caught a couple of trout by trolling a spoon while he paddled. Another trout hit a little Rapala crank bait. Maybe the drop was done, and the trout were in a biting mood.

Darr isn't the only one who thinks the bite slows in falling water. Kris Nault, trout management biologist with the Arkansas Game and Fish Commission, said fishing is better when the water's coming up.

"Typically, people try to be on the river right when generation starts. Fishing's usually not as good when the water is falling," he said.

The current moved the canoe past toppled trees and boulders easily seen in the clear water. These are all good targets for anglers when the current is fast.

"Trout will ambush prey. They'll get behind those boulders and out of the current," he said.

Christy Graham, trout management supervisor with Game and Fish, said the rate of generation determines where trout might be. In heavy current, it's good to fish close to the bank where trout are likely staged out of the main flow. They'll roam farther from shore in a moderate or slow current.

It takes more paddling to travel the seven miles when no generators are turning. There's a gentle current for the first five miles, but there's little or none the last two. There was a trolling motor on the back of the square-stern canoe, but it wasn't used.

The pair enjoyed the falling water ride on a warm winter day. A few trout for the grill was a bonus.