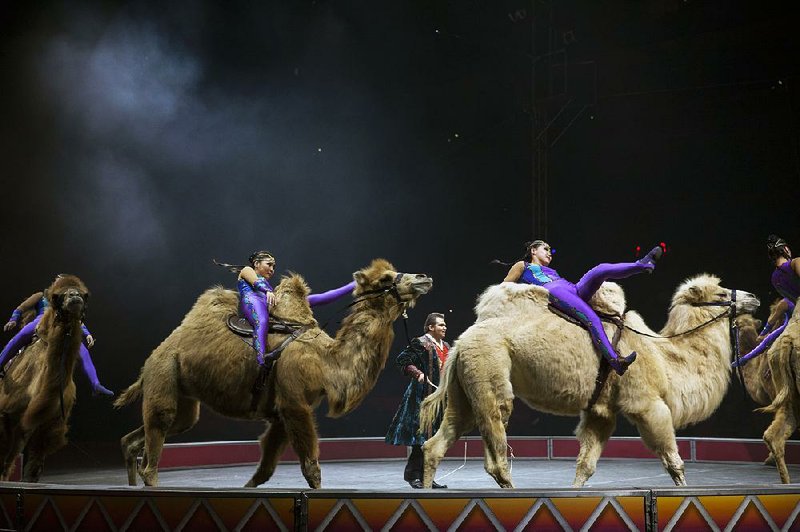 When Ringling Bros. and Barnum & Bailey folds up its circus tents in May, it will put about 400 people out of work, along with dozens of animals.

The show's famous elephants are already retired, now living out their days on the company's conservation center in Florida. Some of the circus acts, like the dogs and the lions, are owned by their handlers and will remain with them.

But the kangaroos, horses, camels, tigers and others belong to Feld Entertainment, the producer of Ringling, which has said it will find them suitable homes. Stephen Payne, a spokesman, said in an interview that those locations have not yet been chosen, but that wherever the creatures land will "have to meet our high animal care standards."

The options include zoos and private owners, but former circus animals often end up at the animal sanctuaries that dot the nation, which vary widely in quality. Those sanctuaries might not have much trouble taking in horses or kangaroos, but tigers, bears and other large carnivores are another matter.

Failed roadside zoos and refuges, abandoned exotic pets and crackdowns on circuses have created a swelling menagerie of wild animals that need homes -- with lots of land, lots of food and proper enclosures. Payne said Feld Entertainment owns about 18 tigers, which will likely join a stream of big cats in search of shelter.

"We will do anything we can do to help them place their tigers, I'll say that right now," said Ed Stewart, the president of the California-based Performing Animal Welfare Society, or PAWS, a longtime Ringling adversary that this month took in eight tigers from a failed sanctuary in Colorado. "But it's not going to be easy, because all legitimate sanctuaries are full of tigers right now."

The demand for wild animal accommodations is rising out of trends that animal welfare activists and sanctuary owners welcome, such as an increasing public distaste for entertainment and research using animals, and bans on circuses using animals in U.S. cities and several Latin American countries.

But they say it is also a sign of the ease with which Americans can acquire exotic animals, as well as the big money involved in breeding bear cubs and other creatures that sell for thousands of dollars.

Tigers are the emblems of this problem of homeless wild animals although bears are also "ridiculously hard to place," said Kellie Heckman, executive director of the Global Federation of Animal Sanctuaries, which has accredited 132 U.S. sanctuaries, only 11 of which accommodate big cats.

Ordinary people adopt fuzzy cubs as pets, and some zoos and refuges allow visitors to handle and take photos with them, a practice animal welfare advocates condemn.

But cute cubs grow into aggressive adolescents within a matter of months, and those used for entertainment often don't perform for many years. They outgrow their use, in other words.

U.S. officials and conservation groups estimate that 5,000 to 10,000 tigers live in the United States, far more than in the wild. Until recently, dozens of them lived at Serenity Springs, an unaccredited Colorado sanctuary that bred big cats, offered photos with cubs and had been cited by the U.S. Department of Agriculture for animal welfare violations.

Last fall, the sanctuary was sold to a respected sanctuary in Arkansas -- the Turpentine Creek Wildlife Refuge near Eureka Springs -- which has since been finding new homes for 110 animals, mostly cats.

"The sanctuary community cannot continue to be the dumping ground for all of those that make a profit off animals, whether that is using them for cub photos, circus acts or any commercial purpose.

There just isn't enough capacity," Heckman said. "Building more sanctuary enclosures is not the answer. We need to regulate who can have exotic animals and for what purposes."

Laws on owning wild animals vary by animal and by state. Some states have bans or require permits, while five do not restrict keeping dangerous wild animals. Last year, the federal government finalized two regulations aimed at increasing oversight of the American tiger population.

Advocates say they are hopeful the Ringling closure will generate momentum for two federal bills, which the company opposed, to ban private ownership and breeding of big cats as well as the use of wild animals in circuses and traveling shows.

In the meantime, representatives of accredited sanctuaries say they're eager to help find homes for the Ringling animals. Susan Bass, the spokesman for Big Cat Rescue in Tampa, Fla., said its founder had offered assistance in an email to chief executive Kenneth Feld. The sanctuary would be able to add some of the tigers to its population of 80 cats big and small, Bass said.

Among the Big Cat Rescue animals are five tigers from Serenity Springs, as well as a tiger named Hoover that had spent his life traveling Peru in a circus wagon. That country banned performing exotic animals in 2011, after steady campaigning by the group Animal Defenders International. Feeding and caring for each tiger costs the sanctuary about $10,000 a year, Bass said.

"As far as we know, he'd never been able to roll around on the grass or have access to a body of water to play in," Bass said. Hoover, who today lives on an acre of land with lakefront access, seemed startled when he first dipped his paw in the lake, but "he swims day and night now."

Such initial bewilderment is common for circus animals, many of which have never had room to roam, said Pat Craig, executive director of the Wild Animal Sanctuary, a 720-acre Colorado spread that is home to 450 large carnivores. It recently took in two tigers from Mexico, part of an influx created after exotic animals in circuses were outlawed there. After Bolivia passed a similar ban, the sanctuary had received 25 lions.

One of the Mexico tigers, Craig said, is nearly paralyzed, probably because of an injury. For years it had been kept in a crate.

"It's a huge load for our medical team to work on her, to get her back into shape," he said. But that tiger is lucky. The sanctuary takes in more than 100 animals each year, Craig said, but resource limitations force him to turn down 50 percent of the animals he's asked to take. Still, Craig emphasized that he can find space for Ringling animals.

Stewart, the California sanctuary director, echoed that. His main, 2,300-acre facility houses a former Ringling elephant, one of three retired circus elephants on the property. Another used to ride a tricycle during the Hawthorn Corp.'s circuses.

"You take the most magnificent animal on earth, and that was his function," Stewart said.

Other animals under PAWS care, which include lynxes and monkeys, have more complicated back stories, having been passed from owner to owner, he said.

"There's no line between, 'This is a pet animal, a roadside zoo animal, a circus animal," Stewart said. "They could be any one of those categories in their lifetime. They're just a commodity."