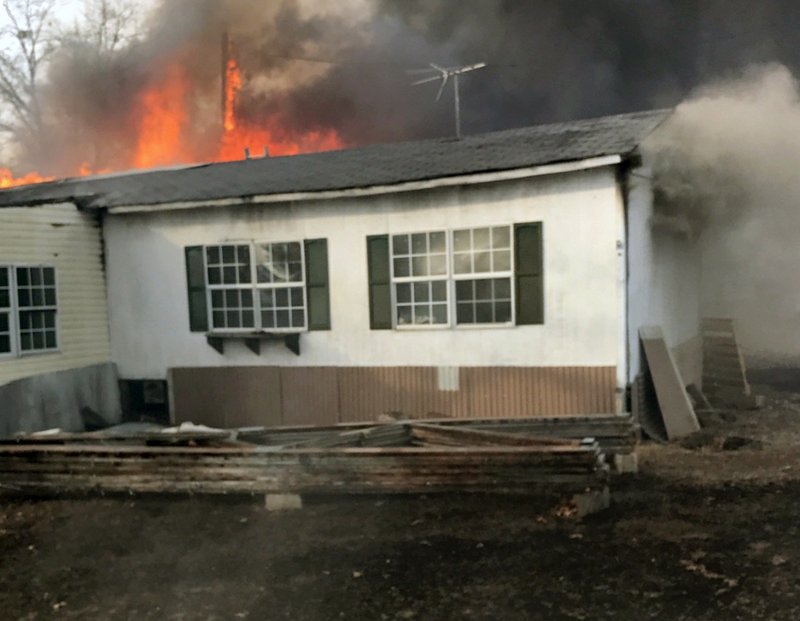 In this Jan. 11, 2017, photo provided by Sherman Hiatt, a wildfire triggered when a pile of chicken manure caught fire in a barn threatens property near Charleston. Agriculture experts are warning farmers to make sure their waste piles don't grow too high because the can catch fire through spontaneous combustion. (AP Photo/Sherman Hiatt)

LITTLE ROCK — How high is too high for a pile of chicken manure?

Chicken waste is an excellent fertilizer, but with the growing season still weeks away it's piling up in barns across the South. To reduce the risk of fire from spontaneous combustion, poultry experts are warning farmers that piles 6½- to 7-feet high are high enough. One pile caught fire in western Arkansas this week, triggering a wildfire that destroyed a mobile home.

"This hit the sweet spot," said Karl VanDevender, a professor and extension engineer for the University of Arkansas System Division of Agriculture, after describing the mix of moisture, texture and decomposition needed to produce a burning pile of waste.

Normal composting at 130 to 145 degrees will kill pathogens, but extra moisture in the stack can help drive temperatures over 170 degrees, raising the risk of a fire, he said.

"If you see smoke, it's kind of iffy. If you break in, you may introduce oxygen and set it off. Have water nearby," he said. "If you have litter stored and stacked, keep an eye on it."

Charleston Mayor Sherman Hiatt, who is also his town's assistant fire chief, said the manure stack that caught fire Wednesday was 8 or 9 feet high. It set nearby hay ablaze and then flames jumped a highway and raced away on a steady 25 mph wind. It took about four hours to douse the flames; no one was injured.

"I think most farmers are pretty diligent in their methods, but sometimes freak things happen," said Hiatt, himself a cattle farmer who worked a poultry waste fire at another farm two years ago.

Arkansas is among the nation's leading poultry-producing states, with Georgia and Maryland. Agriculture schools in chicken country have published brochures on how to store chicken litter, and the University of Maryland goes so far as suggesting having the fire department on hand if farmers intend to move a smoldering pile of waste.

VanDevender said that because so many factors go into igniting a waste pile, it's difficult to predict when one might catch fire.

"With biological processes, we throw precision out the window," he said. 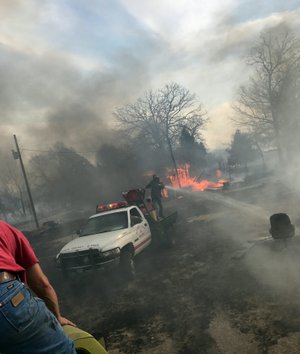 In this Jan. 11, 2017, photo provided by Sherman Hiatt, people work to put out a wildfire triggered when a pile of chicken manure caught fire in a barn as it threatens property near Charleston, Ark. Agriculture experts are warning farmers to make sure their waste piles don't grow too high because the can catch fire through spontaneous combustion. (AP Photo/Sherman Hiatt)