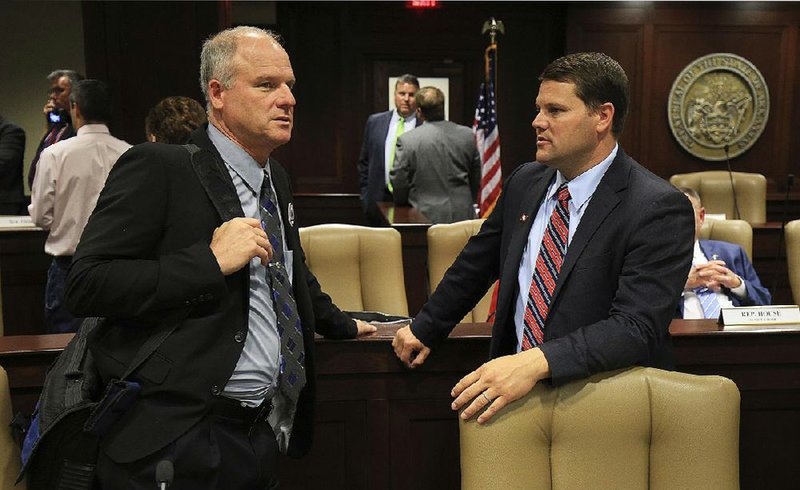 The state House and Senate tax committees will consider bills next week for Gov. Asa Hutchinson's proposed $50 million-a-year tax-rate reductions for Arkansans with less than $21,000 a year in taxable income, legislative leaders said Thursday, a day after the legislation was filed. 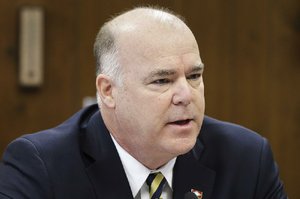 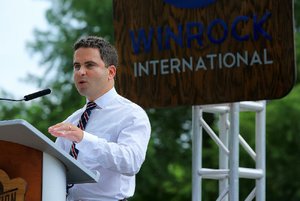 Photo by Stephen B. Thornton
Rep. Warwick Sabin, D-Little Rock, is shown in this 2016 photo. 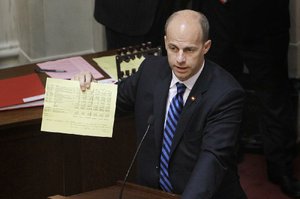 Other legislation was introduced Thursday to enact the Republican governor's $19 million-a-year plan to exempt military retirement benefits from state income taxes and cut the state's soft-drink syrup tax in exchange for modifying three tax exemptions. The exemption of military retirement benefits from income taxes is projected by the state to reduce general revenue by $13 million a year.

Thursday was the fourth day of the 91st General Assembly's regular session. The House and Senate will be in recess until Tuesday. Monday is the state holiday recognizing the birthdays of Martin Luther King Jr. and Confederate Gen. Robert E. Lee.

"I would like to see the tax plans move forward. I think the Senate committee is going to be taking them up quickly," Hutchinson told reporters.

Senate Republican leader Jim Hendren of Sulphur Springs said he's going to try to run his Senate Bill 115, which would enact the larger income tax cut, in the Senate Revenue and Taxation Committee on Wednesday.

"I have got several co-sponsors. I'm getting very little resistance to the income tax plan," said Hendren, whose uncle is Hutchinson.

SB115 also would create an Arkansas Tax Reform and Relief Task Force with 16 members who would recommend a comprehensive plan to reduce rates. The task force would be required to file a final written report with the governor, House speaker and Senate president pro tempore on or before Sept. 1, 2018, in advance of the 2019 regular session.

Some lawmakers have been reluctant to commit to the proposed tax cut because sales and use tax collections lag behind the forecast for fiscal 2017, which started July 1. The 2015 Legislature enacted the governor's individual income tax cuts for Arkansans who make $21,000 to $75,000; those cuts are projected to reduce general revenue by about $100 million this fiscal year.

State officials project that the proposed $50 million-a-year income tax cut would reduce general revenue by $25 million when it takes effect in mid-fiscal 2019, which starts July 1, 2018, and $50 million a year thereafter.

John Shelnutt, the state's chief economic forecaster, told the Senate tax committee Wednesday that he expects sales and use tax collections to improve during the final six months of fiscal 2017.

Richard Wilson, assistant director of research for the Bureau of Legislative Research, told the House tax committee Thursday that he expects revenue collections to fully fund the state's $5.33 billion budget in fiscal 2017 and "perhaps a small surplus, [but] nothing like last year at $177 million." He cautioned it's possible that increased income tax refunds this spring could derail his projection.

"I am still kind of hedging my bets here a little bit," Jett said when asked whether he supports HB1159.

"But now, if the governor can prove to us we have got the money there to do it, then I'm going to vote yes on the $50 million for the low-income [tax cut]," he told reporters.

During the House tax committee's meeting, Jett told fellow members, "Basically, I think what's going to take place is we do the governor's tax cut package and then we work through those issues."

He said the House tax committee will delay action on other tax-cut bills until the end of the session, and the committee will consider the bills based on the budget for fiscal 2018 and projected revenue collections.

"The most important thing in this committee is everybody has a fair and honest hearing, if you will, for open debate, but we also have to recognize the fact that we are the first line of defense to protect the budget for the state of Arkansas, and that's where I need you guys to help to do that," Jett told the House tax committee.

After the House committee meeting, Rep. Warwick Sabin, D-Little Rock, said that on Thursday he filed House Bill 1161, which would create an earned income tax credit for low-income Arkansans. The Senate Revenue and Taxation Committee chairman, Sen. Jake Files, R-Fort Smith, is a co-sponsor of the bill, and Jett said he agreed to co-sponsor it. Files said he filed an identical bill, Senate Bill 119, to get a projected revenue impact from the state Department of Finance and Administration.

"I did hear what Rep. Jett said, but in the context of considering the governor's tax cut, I think the Working Families Opportunity Act deserves the same consideration," Sabin said, referring to his bill. "I think that everyone understands that there is a process that involves 135 legislators and all good ideas deserve a public hearing."

Jett said he advised Sabin to try to work out this issue with Hutchinson, adding that Sabin still could present his bill to the committee late in the session.

The first $6,000 a year in military retirement benefits is exempt under current law.

Exempting military retirement pensions and reducing the soft-drink syrup tax from $2 per gallon to $1.26 per gallon would reduce revenue by a projected $19.3 million a year. To compensate, SB120 and HB1162 would levy a 6.5 percent sales tax on candy and soft drinks, now taxed at the 1.5 percent rate on groceries; remove the exclusion of unemployment compensation from income taxes, to mirror federal law; and apply the sales tax on the full cost of manufactured housing, now taxed at 62 percent of the structure's value.

English and Fite said they don't know when they'll present their bills to the Senate and House tax committees.

Files said a lot of people object to increasing the sales tax on manufactured housing, which is projected to raise $2.4 million a year.

"Hopefully, we are looking at some alternatives on that and that's a little bit in flux. I think there is better than a 50-50 chance that there may be some changes to that part of it," he said.

"I think a lot of the members would like to vote for [exempting military retirement benefits from taxes], but the way it being paid for is causing some members heartburn and pause, and I am kind of in that group," Jett said, referring to applying the sales tax to the full cost of manufactured housing.

"We have to pay for that portion of the tax cut for our military retirees, so we outlined what [are] the offsets that are needed to protect the budget," he said. "If there is a better exemption that somebody else wants to close, we are open to discussion on it."

Print Headline: 2 panels to take up tax-cut bills next week