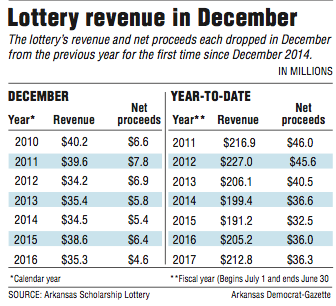 The Arkansas Scholarship Lottery's total revenue dropped in December compared with a year ago, and the amount raised for college scholarships was the lowest ever reported for the month, thanks to prize payouts.

The lottery's total revenue slipped from $38.6 million in December 2015 to $35.3 million last month as revenue from both scratch-off and draw-game ticket sales dipped compared with a year ago, the lottery reported this week in its monthly report to Republican Gov. Asa Hutchinson and the Legislative Council's lottery oversight committee. The lottery's draw games include Powerball, Mega Millions, the Natural State Jackpot, Cash 3, Cash 4, Fast Play and Lucky for Life.

Net proceeds slipped as well, from $6.4 million in December 2015 to $4.6 million last month, the lottery reported. Last month's net proceeds are the lowest the lottery has reported for December since the lottery started posting monthly totals on its website in 2010.

The lottery's net proceeds fell last month because "we handed out a great deal of prizes, including a million dollar instant ticket prize and a $500,000 Play It Again winner," lottery Director Bishop Woosley said in a written statement Wednesday. Instant tickets also are referred to as scratch-off tickets.

"These winners were paid out in addition to several other high tier winners that cashed their tickets in December. That increased prize expense had a drastic impact on the amount of [proceeds] we raised," he said.

Woosley said the majority of the lottery's drop in overall revenue in December was in scratch-off ticket revenue, but added that's "a little misleading."

The lottery's draw-game revenue dropped in December compared with a year ago because in December 2015 "we had a Mega Millions jackpot over $100 million and a Powerball jackpot over $300 million," and the sales for those games dropped last month, Woosley said.

The lottery helped finance more than 30,000 Arkansas Academic Challenge Scholarships during each of the past seven fiscal years. The Legislature has cut the size of future scholarships three times as a result of the lottery's net proceeds lagging behind initial projections and more students than projected obtaining the scholarships.

During the first six months of fiscal 2017, net proceeds for college scholarships have totaled $36.3 million -- up from $36 million in the same period in fiscal 2017.

Act 1180 of 2011 requires that unclaimed prize money, minus $1 million, be transferred to the state Department of Higher Education's scholarship account on the last day of each fiscal year.

Woosley, who has been the lottery's director since February 2012, said, "So far, we are also up $1.7 million in proceeds versus our budget for the fiscal year.

"We are in a much better position at this time in the fiscal year versus where we have been in the past," he said.

"If we could get to 25 cents, we would at least be making progress and that would provide a lot more scholarships, and I think they could do that with the percentage of [revenue] allocated for prizes," he said.

Lottery officials have warned lawmakers in the past that that type of proposal would eventually reduce the lottery's revenue and net proceeds.