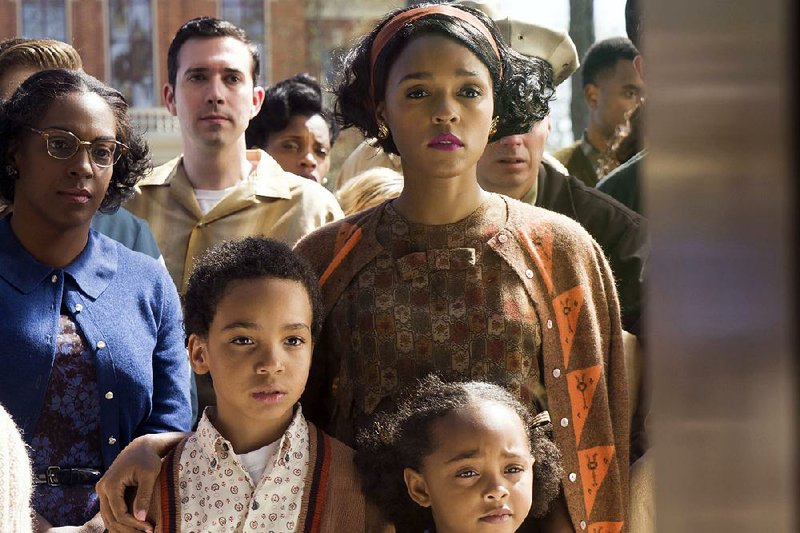 The Rev. Roderick Dwayne Belin, a senior African Methodist Episcopal Church leader, stood before a gathering of more than 1,000 ministers in a drafty Marriott ballroom in Naperville, Ill., last month and extolled the virtues of a Hollywood movie. 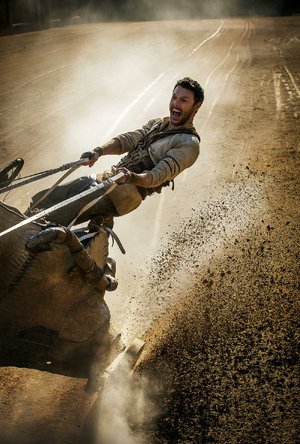 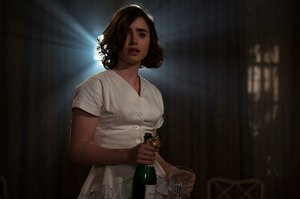 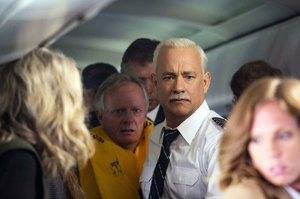 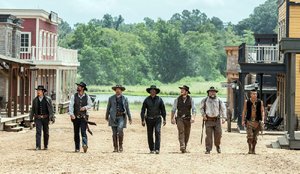 Photo by File photo
Wit PR, a firm that pitches movies to Christian audiences, is encouraging faith communities to fi nd theological lessons in secular movies such as The Magnifi cent Seven.

"Imagine this clip playing to your congregation, perhaps tied to a theological discussion about our sacred lives and our secular lives and how there is really no division," he said, before showing the trailer for Hidden Figures, which 20th Century Fox released in theaters nationwide Friday.

The film has no obvious religious message. Rather, it is a feel-good drama about unsung black heroines in the NASA space race of the 1960s. But Fox -- working with a little-known firm called Wit PR, which pitches movies to churches -- sought out Belin to help sell Hidden Figures as an aspirational story about women who have faith in themselves. He became a proponent after a visit to the movie's set in Atlanta, where Wit PR invited seven influential pastors to watch filming and hang out with stars like Kevin Costner and Taraji P. Henson, who spoke of her struggles to succeed in Hollywood.

"I came away really interested in using film to explore faith," Belin said.

On the surface, Hollywood is a land of loose morals, where materialism rules, sex and drugs are celebrated on screen (and off), and power players can have a distant relationship with the truth. But movie studios and their partners have quietly -- very quietly, sometimes to the degree of a black ops endeavor -- been building deep connections to Christian filmgoers who dwell elsewhere on the spectrum of politics and social values. In doing so, they have tapped churches, military groups, right-leaning bloggers and, particularly, a fraternity of marketing specialists who cut their teeth on overtly religious movies but now put their influence behind mainstream works like Frozen, The Conjuring, Sully and Hidden Figures.

Film companies can no longer afford to take any audience for granted. Despite a growing population, North America's moviegoing has been more or less flat -- not exactly what investors want to hear. Last year, 1.32 billion tickets were sold, up from the year before but down from the 10-year high of 1.42 billion in 2009, according to the Motion Picture Association of America. More troubling, cheaper and more convenient in-home entertainment options are threatening the grip that multiplexes have long had on young adults. The number of frequent moviegoers ages 12 to 24 has fallen for three consecutive years.

Hollywood is under pressure to reverse that trend. Churches may seem like an unusual path toward young people, but 41 percent of millennials engage in some form of daily prayer, according to a 2010 Pew Research paper. To reach them, many ministers have built vast social media networks. The Rev. Jamal H. Bryant, a megachurch minister in Baltimore, has 250,000 followers on Twitter. (His church also has a smartphone app.)

Studios used to sell movies by bombarding television networks with advertising on the eve of release. That tactic is still used for summer blockbusters, but it is expensive and increasingly ineffective in the DVR age. As a result, studios are aggressively trying to plumb niche markets that can be reached through word of mouth.

"Someone like Jamal Bryant, because he has such a prodigious network online, becomes a pipeline to other youth pastors," said the Rev. Marshall Mitchell, a pastor in Jenkintown, Pa., and a founder of Wit PR.

In the coming weeks, Bryant plans to take up to 300 parishioners to a Wit PR-organized screening of Hidden Figures in northwest Baltimore. Afterward, Bryant intends to lead a discussion connecting the plot to a theological message.

"Most studios, to be honest, have no idea how to market to us," Bryant said. "They're still doing the Sammy Davis Jr. tap dance: 'Look at me! Aren't you impressed?' Well, no, not really. But if you bring us into the tent, we are often excited to spread the word."

People of faith and their sheer numbers -- by some estimates, the United States has roughly 90 million evangelicals -- are not a new discovery in Hollywood. Moviedom's leading Christian consultancy, Grace Hill Media, was founded in 2000 by a former publicist for Warner Bros. Studios, who woke up to the power of the market in 2004, when Mel Gibson's $30 million The Passion of the Christ came out of nowhere to sell $612 million in tickets worldwide. Sony's Columbia Pictures has for years found success with low-budget religious films such as Soul Surfer and Miracles From Heaven.

What is new is the aggression and sophistication.

Even after several flops -- among them last summer's Ben-Hur, which cost at least $150 million to make and market and collected $94 million -- studios are working on at least a dozen movies in this arena, including The Star, an animated film about the animal heroes of the first Christmas. In November, Metro-Goldwyn-Mayer announced the introduction of Light TV, a faith and family broadcast network. Other media companies are considering the creation of faith-based streaming services, essentially Netflix for the pious.

Mitchell and his Wit PR partner, Corby Pons, have recently been hired to use their clergy connections to tout The Magnificent Seven, a remake of the classic Western; Sully, the Warner Bros. hit about the 2009 emergency landing of a US Airways jet in the Hudson River; and Rules Don't Apply, a period romance directed by Warren Beatty.

Movie executives tend to view the Christian audience as monolithic. It is not, of course. That may be why Noah sold fewer tickets in 2014 than Paramount had hoped. The studio figured the big-budget movie about the biblical figure would attract religious viewers en masse, but Noah landed poorly with more literal interpreters of Scripture, who objected to the film's depiction of fallen angels as "Transformers"-style rock monsters.

The increasing number of consultants arriving in Hollywood to help forestall such problems -- for fees starting at $300,000 per film and going up to $3 million -- is also leading to gridlock at church offices. Some megachurch pastors, for instance, complain that they are being inundated with film-related requests.

"Nobody wants to feel used, and sometimes the movie business acts like people of faith are there to be turned on and off as the marketers see fit," said DeVon Franklin, an ordained minister, an author and a producer of films including Miracles From Heaven.

Undoubtedly aware of that perception, studios try to keep a tight lid on their efforts, sometimes even insisting that no faith outreach is happening on behalf of a film, when there is actually a coordinated effort. Studios live in equal fear that obvious appeals to religious audiences will alienate more secular ticket buyers. Almost all studio executives contacted for this article rejected repeated interview requests, citing policies not to publicly discuss marketing strategies of any kind.

But the basic rules in selling a film are the same, said Jonathan Bock, the founder of Grace Hill, which has quietly marketed movies to spiritually minded people, including Man of Steel. "What religious people want most when they go to the movies, like people who aren't religious, is to be entertained," he said.

For decades, religious audiences had little tolerance for many of the movies produced by Hollywood. By the 1990s, when films like Quentin Tarantino's violent Pulp Fiction entered the mainstream, the culture gap seemed unbridgeable.

But a pronounced swing toward family fare, helped by a growing overseas appetite for animation and PG- or PG-13-rated superhero fantasies, opened the door to new connections between Hollywood and faith audiences. If The Passion of the Christ showed that a mass audience existed for overt religious stories on screen, The Blind Side, a 2009 family sports drama about a young black man taken in by a white family, showed the promise of less obvious storytelling.

The $29 million film took off at the box office (ultimately selling $309 million in tickets). Bock and Grace Hill circulated film clips and sermon outlines to 22,000 ministers, some of whom preached its story of personal determination and racial conciliation. One suggested "sermon starter" involved a scene where the lead character, played by Oscar-winner Sandra Bullock, abruptly persuades her husband to stop their car and offer a young man a ride.

"Has God ever nudged your heart?" the notes read.

Bock, who is Presbyterian, is credited with being the first Hollywood marketer to realize that churches had started to install enormous screens to use during their services, sometimes just to display hymn lyrics. More recently, $35,000 video walls have become more common in sanctuaries. "It makes church feel more contemporary," Bock said, adding that ministers are becoming adept at "building vibrant social media communities that expand their reach far beyond Sunday morning."

Sony's faith-based unit, Affirm Films, has lately been working to tap Christian audiences overseas, an area that studios have largely ignored. "There are pockets of evangelical Protestants around the world, but it takes a lot of preplanning," said Rich Peluso, a Sony executive vice president. "You have to develop a relationship with them." In some cases, Sony has bypassed film distributors and made release deals for dramas like the prayer-focused War Room with Christian media companies in countries including Italy and Australia.

"People are sometimes surprised to find me, a conservative Christian guy, working in Hollywood," Peluso said. "There are a lot of us, actually. More than people think."

Hidden Figures, produced by Chernin Entertainment and Levantine Films for about $25 million, after accounting for tax credits, has been marketed with all of the usual Hollywood bells and whistles.

A trailer came out in August. In September, Fox staged a publicity stunt at the Toronto International Film Festival, showing 20 minutes of the film followed by a free concert by Pharrell Williams, who contributed to the score. Another trailer followed. Ads popped up on TV, billboards, bus shelters, websites. Fox also lined up a partnership with Pepsi and has backed the film with a robust Oscar campaign.

So why also employ Wit?

Elizabeth Gabler, the president of Fox 2000, the studio division behind Hidden Figures, said in a statement, "Corby and Marshall help to locate these important faith audiences and leaders who are hungry for aspirational content without feeling like they are going to church."

Mitchell, 46, and Pons, 39, went to work early in 2015, reading the Hidden Figures script, written by Theodore Melfi and Allison Schroeder (and based on Margot Lee Shetterly's book). They decided that this film, because it was not overtly religious, needed to be "poured with Dixie cups instead of buckets," as Pons put it. Translation: Spread the word by facilitating discussion rather than hammering home a message through blanket ads in Christian publications.

"We see this as a healing movie," Mitchell said. "At a moment when so many people -- right and left, black and white -- are arguing over what America is or what America isn't, here is a chance to come together in a theater and look up, to space quite literally in this case, but metaphorically too."

Print Headline: Reeling in the faithful