State revenue up by $7.6M in December 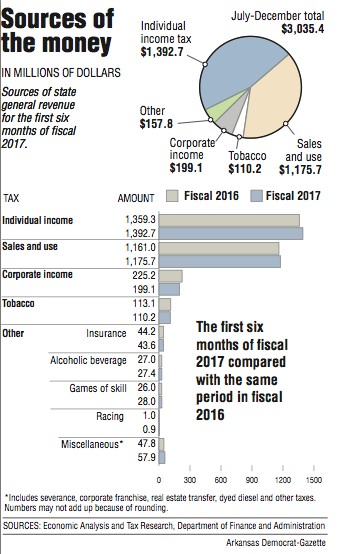 Bolstered by rising sales and use tax collections, Arkansas' general revenue in December increased by $7.6 million over year-ago figures, to $536.9 million, and exceeded the state's forecast by $6.5 million.

Sales tax collections in December reflected taxes remitted by businesses that month based on their sales to consumers in November.

"I think we are in a fairly good place for growth, [for] both jobs and income, and it's showing up in sales tax at this point where it was not before," John Shelnutt, the state's chief economic forecaster, said when asked what the report shows about the state of the Arkansas economy.

The record general revenue collection for the month of December continues to be the $542.2 million collected in December 2014, said Whitney McLaughlin, a tax analyst at the finance department.

Wednesday's report was released with lawmakers set to convene in a regular session, starting Monday, in which they will consider Gov. Asa Hutchinson's $50 million-a-year proposal to cut individual income tax rates for Arkansans with taxable income of less than $21,000 a year. He's also proposed a $19 million-a-year plan to cut some taxes, including $13 million to exempt military retirement benefits from income taxes, in exchange for increasing other taxes.

"The December revenue report shows a growing state economy at work. Particularly positive are growth in sales tax revenues, up almost 9 percent from the prior year, and growth in income tax withholding. That's a good sign that more Arkansans are working more and earning more as a result," the Republican governor said.

"We are optimistic that we'll hit our revenue forecast but are only now at the halfway point in the fiscal year. We have a long way to go before June 30. We'll continue monitoring our revenue reports and keeping a close eye on collections as we go into this year's legislative session."

Joint Budget Committee co-chairman, Sen. Larry Teague, D-Nashville, said the general consensus of state and legislative experts is that the state will meet its general revenue forecast for fiscal 2017. December is the sixth month in fiscal 2017, which ends June 30.

"I am comfortable with the $50 million [proposed income tax cut] and I am going to help [the governor] with it," said Teague, who also serves on the Senate Revenue and Taxation Committee. He said he favors the governor's plan to exempt military retirement benefits from income taxes, but he needs to study the rest of Hutchinson's $19 million-a-year proposal.

During the first six months of fiscal 2017, general revenue collections have increased by $30.9 million, or 1 percent, over the same period last fiscal year to $3.03 billion, but they're below the state's forecast by $14.7 million, or 0.5 percent.

So far in fiscal 2017, individual income tax collections have increased by $33.4 million, or 2.5 percent, over the same period last fiscal year to $1.39 billion and exceeded the state's forecast by $2.8 million, or 0.2 percent.

Tax refunds and some special government expenses, such as court-mandated school desegregation payments, come off the top of total general revenue, leaving a net amount that state agencies are allowed to spend.

Shelnutt said officials have no plans to change the forecast.

In 2016, the Republican-controlled Legislature and Hutchinson enacted a $5.33 billion general revenue budget for fiscal 2017 that factors in nearly $101 million in reduced individual income tax revenue. The 2015 Legislature cut income taxes for Arkansans making between $21,000 and $75,000 a year.

In the session starting Monday, lawmakers will consider the governor's proposed general revenue budget of $5.48 billion for fiscal 2018, a $153 million increase in which most of the additional money would go to the Department of Human Services.

According to the finance department, December's general revenue included:

"Part of that 8.9 [percent increase] is the fact [that] December a year ago was so weak, so it's an easy comparison. But I think the economy is fairly strong currently and we are seeing that in [individual income tax] withholding," Shelnutt said.

December's increase in sales tax collections "appeared [to] be across the board [in] retail and business categories, everything except motor vehicles, which was up only 1 percent," he said.

Withholdings are the largest source of individual income taxes. They increased by $9.6 million over the same month in 2015 to $198.5 million and exceeded the state's forecast by $5.2 million. Payroll income is increasing at about 5 percent, which is a very good growth rate, Shelnutt noted.

The increased withholdings reflect more Arkansans working and more of them working more hours, he said.

Print Headline: State revenue up by $7.6M in December