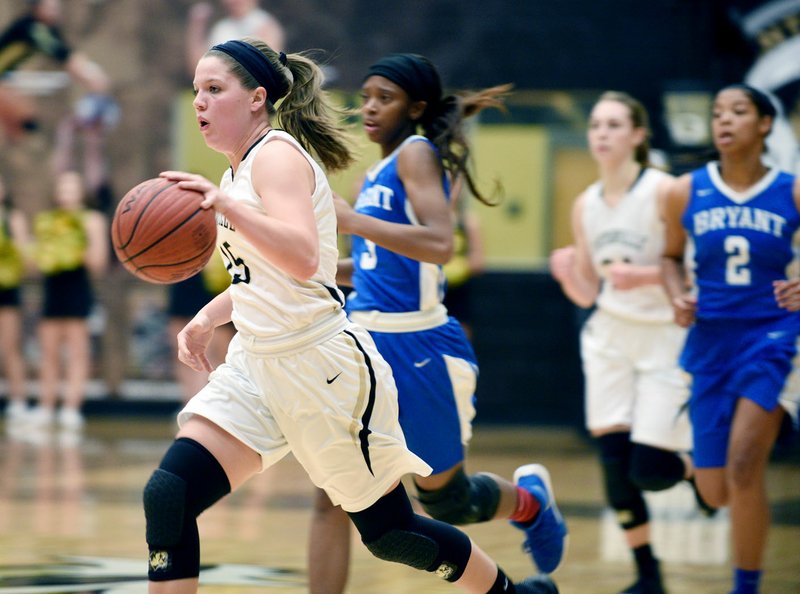 Bentonville High senior Abby Roberts drives down the floor against Bryant during a Dec. 1 game at the Crabtree Invitational in Tiger Arena. - Photo by J.T. Wampler

BENTONVILLE -- The frontcourt depth was so thin when Bentonville High's girls started their basketball season that Tom Halbmaier moved Abby Roberts from a guard to the power forward position.

It meant the 5-foot-7 senior would give up some noticeable size to most of the players she would face, even though there were taller girls on the Lady Tigers' roster. Roberts, however, embraced the new responsibilities.

NOTABLE Was forced to start the season as an undersized power forward, but now plays more of a hybrid guard/forward role, depending on situation. … Averages 6.8 points, 5.8 rebounds, 2.3 assists and 1.5 steals per game. … Scored a season-high points twice, including last week against St. Joseph (Mo.) Lafayette, and had a season-high 12 rebounds in the season opener against Greenwood. … Also a member of Bentonville’s girls golf team.

"I try to get eight rebounds per game. That's my goal every game."

The move became necessary as Emma Palasak started the season nursing an ankle injury and fell behind. Halbmaier said Roberts was chosen for the spot because of the toughness she brings to the game.

She was then was prepared for the task ahead during practice when she had to guard the bigger girls. During the early games, Roberts was able to focus on defending the forwards, although there were times she would drop off and guard the opposing teams' guards.

"This year, she's definitely a tweener," Halbmaier said. "It took Palasak a little while to get back from the ankle injury, so Abby had to make that adjustment and drop down to the four spot, and she did a great job.

"Those first four or five games, it was quite a challenge for her, and she did a good job. She will flat-out compete. She's the type of kid that will never let the girl that she's guarding have the upper hand or get the best of her."

Things are now a little different as the Lady Tigers (7-6) enter 7A-West Conference play this week. Palasak has returned from her ankle injury and gives Bentonville some added inside strength, and that has allowed Krista Clark to move to a power forward.

Meanwhile, Roberts is now back to the role she expected to play all season long. She can be the third guard if Halbmaier chooses to play that way, but there are times when she still has to go back into that forward spot from time to time.

The move to the hybrid guard-forward role may have not helped her goal for rebounds, but it's allowed Roberts to rediscover her shooting touch and find her comfort zone on the offensive end. She scored 11 points in a Dec. 17 game against Carl Junction, Mo., then she scored 11 and 10 points in games against St. Joseph (MO.) Lafayette and Forrest City, respectively, during the Neosho (Mo.) Holiday Classic.

That has allowed her to increase her scoring average to 6.8 points per game, while she's still grabbing a respectable 5.8 rebounds per outing, as well as 2.3 assists and 1.5 steals per game. Her shooting percentage currently sits at 40 percent (10 of 25) from 3-point range and 52.4 percent (22 of 42) inside the arc.

"She brings a complete game now," Halbmaier said. "She's one of our better passers, and she sees the floor well. She competes hard on defense and one of our best rebounders.

"Rebounding is not a skill; it's an attitude. She has a fierce attitude when it comes to rebounding, and she's not afraid to guard their best offensive player."