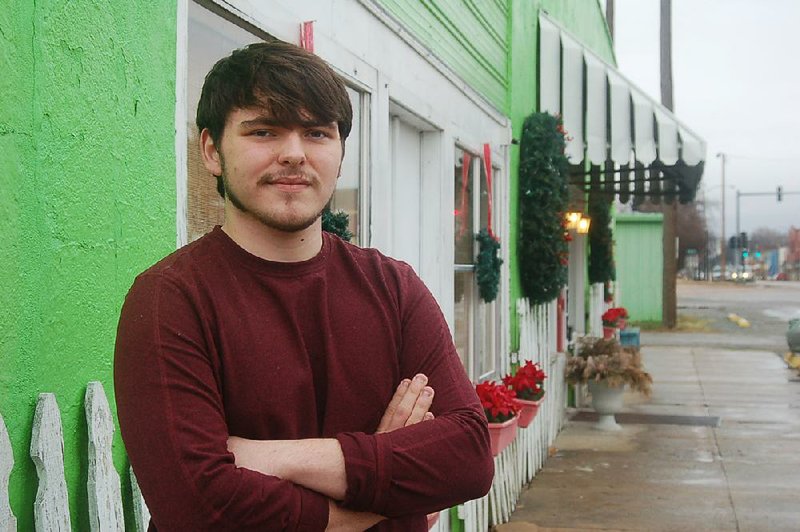 Hayden Taylor stands outside the office of his new newspaper in downtown Brinkley.

BRINKLEY -- Katie Jacques has been publisher of the weekly newspaper that serves Brinkley and Monroe County for 20 years -- longer than the county's newest newspaperman has been alive.

Jacques last week sold the assets of the Central Delta Argus-Sun to Hayden Taylor, 19, whose family's roots in the county go back five generations. Taylor is a throwback to the time decades ago when a few young men his age ventured into owning newspapers, but it was rare then and is almost unheard of now in the age of the Internet.

He said he's not deterred by his lack of newspaper experience or journalism study, but will buy a few textbooks to read up on the subject. "I think I'm more concerned about management and administration, how to make the bottom line work," he said.

A 2015 graduate of Marvell Academy, he attended Williams Baptist College in Walnut Ridge for a year and never decided on a major.

"I've always enjoyed reading, and I've done well in history and politics, economics and religion," Taylor told a visitor recently. "All those interests line up with writing."

Taylor's Monroe County Herald will debut this week, using the Argus-Sun's list of about 1,800 subscribers. Like the Argus-Sun, it will be printed at the Stuttgart Daily Leader. He'll also produce a free weekly shopper to be mailed to 7,000 residents in the area. Weekly inserts by four area grocery stores will go a long way toward covering the weekly's financial overhead.

"My friends think Facebook is where they can get 'local news', and I just don't believe that," Taylor said. "That 'news' isn't always news, and it's hardly ever really local."

He said he doesn't cotton to any particular political party and doesn't foresee having an editorial page that takes a position on the issues of the week. "People have been spouting their views at me, especially this year, so I don't think I really want to spout mine back at them," he said. He does, though, want to have a variety of local columnists and guest writers.

The newspaper eventually will have some sort of presence online but likely will have a firewall to limit access to subscribers, he said.

The Herald office will be on West Cypress Street in downtown Brinkley, where the Taylor family owns three adjacent buildings. Taylor's mother, Beth, operates a cafe-boutique, the Cottagemall and Cafe, in two of them. She'll be the Herald's advertising director.

Glenda Arnett, described by several people in town as the heart and soul of the Argus-Sun, will be retained at the Herald and will celebrate her 50th anniversary in the Brinkley newspaper business in May.

"We've already made it clear to him that he'll get no breaks," Beth Taylor said.

The transition to the Herald was rushed along slightly when the Argus-Sun office caught fire Dec. 16.

The staff salvaged a couple of computer hard drives and cobbled together enough other resources to publish the next issue, only a day late. It turned out to be the last edition of the Argus-Sun, whose lineage dates back to 1875.

Jacques, in a farewell editorial, gave a big plug to her successors, saying the Taylor family's "vitality and curiosities will push the newspaper in new and exciting directions." She thanked her readers of 20 years and asked them to support the new Herald. Terms of the sale weren't disclosed.

Jacques and her husband, Thomas, assistant director at the Delta Cultural Center in Helena-West Helena, bought the Brinkley paper in 1995 in a lease-purchase agreement that was just recently paid off.

"The fire just really took a lot out of us," Katie Jacques said.

While the cause of the fire is being investigated, Jacques said she discovered in its aftermath that a television, a computer-game console and a small amount of cash were missing. A firewall contained the fire to the newspaper's front office, and the newspaper's archives with bound issues dating back to the 1890s in the back of the building weren't damaged.

Her husband's lifelong collection of some 15,000 comic books was destroyed. But, except for some soot damage, her collection of a half-million Legos survived.

Jacques will help Taylor and his staff through the transition for at least six weeks. She hasn't decided on her new career.

After giving birth to her daughter in Little Rock 12 years ago, Jacques made the Argus-Sun office her first stop, with infant in tow. "My kids grew up in the office, so we'll always remember it," she said. "Yes, we covered 'news,' but, really, I think we did well in what we called 'refrigerator' news. People would clip out stories, have them laminated, and post them on their refrigerators. I think the Argus was appreciated for that."

The Argus-Sun's final issue included 285 "letters to Santa" from children across the county. Santa apologized in a note to readers for editing the letters to 100 or fewer words and lamented that any photographs sent in with the letters were destroyed in the pre-Christmas fire.

Stan Schwartz, a spokesman for the National Newspaper Association, said Taylor is especially a rarity in the 21st century. "There have been a few [such young publishers], but it's certainly rare these days that someone that age will start up from scratch," Schwartz said.

Schwartz recalled that a man about Taylor's age tried a couple of years ago to start a weekly newspaper in a small Missouri town that had lost its newspaper years earlier. "He had a good business plan, and the town was clamoring for a newspaper. But, unfortunately, it lasted only a year. It was in a very rural area that just didn't have the advertising base to support the paper."

Brinkley has about 4,000 residents.

Main Street, running south from its intersection with Interstate 40, has a mix of empty buildings and a string of restaurants, gas stations, banks, funeral homes -- enough potential advertisers to warm the cockles of any publisher's heart. Brinkley's downtown is like those of other Delta towns that have lost population over the decades: A few businesses are open but appear to be outnumbered by empty storefronts.

"I hope he's got a lot of energy," said Bill Sayger, a longtime county historian and director of the Central Delta Depot Museum. "I'm excited for him, I really am," Sayger said. "If there's fresh blood at the newspaper or anywhere else in Brinkley, it could help reinvigorate the town."

The Jacqueses for a time ran both the Brinkley Argus and the Monroe County Sun in Clarendon but merged the two in 2007. Some in Brinkley thought "their" newspaper had too much Clarendon news, Sayger said. "I think all that happened really is that they had a very good, very active stringer down in Clarendon."

Tom L̶a̶r̶i̶m̶o̶r̶e̶ Larimer*, executive director of the Arkansas Press Association, declined to offer advice, especially unsolicited advice, to Taylor but welcomed him into the newspaper fold.

"He'd certainly be one of the youngest we know of, and maybe that's what the industry needs now -- that young blood," L̶a̶r̶i̶m̶o̶r̶e̶ Larimer* said.

About 125 newspapers are members of the Arkansas Press Association, with about 90 of those being weeklies.

"Community newspapers, generally, are doing better [financially] than dailies, but again, so much depends on the health of the communities they serve," he said.

Community papers serve a niche that mostly goes uncovered by other media.

"If you're really out in a rural area, and you want to know what time the Passover service is at the local Methodist Church, your newspaper will have it," L̶a̶r̶i̶m̶o̶r̶e̶ Larimer* said. "I bet you won't find it on the Internet."

*CORRECTION: Tom Larimer is executive director of the Arkansas Press Association. His last name was spelled incorrectly in a previous version of this story.