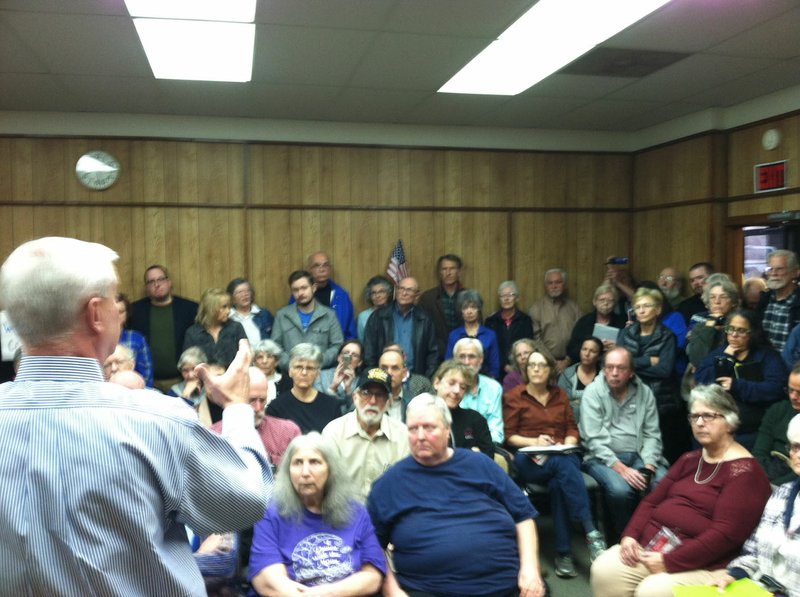 NWA Democrat-Gazette/DOUG THOMPSON U.S. Rep. Steve Womack of Rogers talks to a crowd Tuesday, Feb. 21, 2017 at the West Fork City Hall. Womack told the crowd of more than 200 people he was elected as a Republican to back a Republican view of government and that is what he will do.

WEST FORK -- Third District Rep. Steve Womack of Rogers told an impassioned crowd of more than 200 people Tuesday he was elected as a Republican to back a Republican view of government and that is what he will do.

Sen. Tom Cotton, R-Ark., has a town hall scheduled for 5 to 6:30 p.m. today at the Pat Walker Center of Springdale High School. The campus will open to visitors at 4:20 p.m. and doors to the center, which seats 2,000, will open at 4:45 p.m., according to the senator. No firearms, large bags, backpacks, food or drink will be allowed.

Womack started his "coffee with the congressman" event, scheduled for 8:30 a.m., at least 10 minutes early as the crowd filled the West Fork City Hall's meeting room, packed the hallway and poured through the doors and into the parking lot. West Fork police had to clear the halls because of fire regulations.

People who couldn't get inside chanted Womack should take the meeting outside. He didn't, but met with those in the parking lot after the event.

This was Womack's first at-large get-together with constituents in Northwest Arkansas since President Donald Trump took office. Trump won the election in the Electoral College despite trailing in the national popular vote. Womack's morning coffee events in the region rarely draw a crowd of more than 40 and are often attended by conservative groups.

Tuesday's event was different with the most visible presence being members of Ozark Indivisible, a group opposing Trump's policies on immigration, health care and other issues.

Supporters of the president also showed in force.

The room became tense at times. Womack said at one point he was willing to stand and let chants go on until the meeting was scheduled to end at 10 a.m., then leave without answering a question if the crowd wouldn't let him make his introductory remarks and fully answer questions.

Protests such as this are going on all over the country, he said.

"I've never been a liberal in my life, but if you want people to be civil, tell President Trump he needs to start that. Start with him," replied Eileen McGarry of Fayetteville.

The most frequent question asked was whether Womack would help "put a ring in the nose," as one constituent put it, to control Trump. At least two questioners asked if Congress would investigate the president's business ties with Russia. One Republican constituent, who identified herself as a supporter of rival Republican presidential candidate Gov. John Kasich of Ohio, described Trump as a "man child."

"Do you think you guys are lonely voices in the wilderness, that conversations with the president about being more diplomatic aren't taking place on a daily basis?" Womack said.

Other members of the crowd told Womack to support the president and to make good on promises he has made to conservative supporters.

"Do what you were elected by a large majority to do and that the vast majority expects you to do," said Anthony Baughman of West Fork.

Trump didn't win the popular vote nationwide, but he carried the 3rd District and Arkansas by hefty margins, Womack reminded the crowd.

"The electorate spoke," he said.

Trump carried Arkansas in the Nov. 8 election with more than 60 percent of the vote, Arkansas Secretary of State records show. He carried Washington County by less than 51 percent, but almost 10 percentage points and 8,110 votes ahead of the next candidate, Democratic nominee Hillary Clinton.

Womack, who was first elected to Congress in 2010, hasn't had a Democratic opponent since the 2012 election, and that opponent dropped out of the race.

Womack said he will support conservative goals, but will not be a party line vote and has already publicly broken with House Speaker Paul Ryan, R-Wis., by opposing a border adjustment tax on imported goods.

"I'm probably going to get called to the principal's office over that," he said of Ryan.

He also has had extensive conversations with Gov. Asa Hutchinson over health care and the possible effect on Arkansas of changes in national health policy, he said.

One of his priorities is getting the deficit under control and reducing the national debt, he said. This echoed a constant theme in his meetings with constituents in years past.