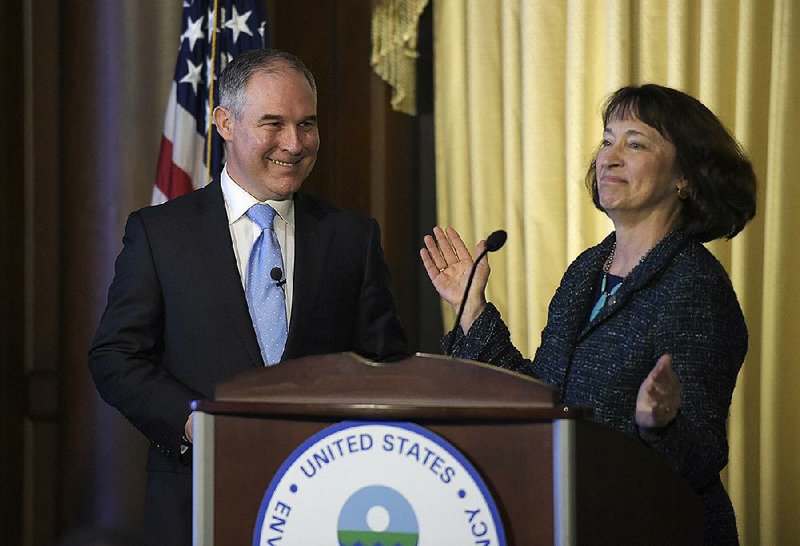 In his first full workday as administrator of the Environmental Protection Agency, Scott Pruitt made clear Tuesday that he intends to step back from what he sees as the agency's regulatory overreach during former President Barack Obama's administration.

Pruitt, who spent years criticizing and suing the EPA before becoming its leader, reiterated an argument he often had made as Oklahoma's attorney general.

"The only authority that any agency has in the executive branch is the authority given to it by Congress," he said during an address to employees at the agency's headquarters. "We need to respect that. We need to follow that. Because when we do that, guess what happens? We avoid litigation. We avoid the uncertainty of litigation, and we reach better ends and outcomes at the end of the day."

Pruitt told employees that he was there to listen to them, and he outlined principles for how he planned to guide the agency, including emphasizing civility and respect for the role of the states.

"In this environment we live in this country today ... it's a very toxic environment," Pruitt said. "We have jerseys that we put on both politically and otherwise. And that's something, I think, is damaging to finding results and answers."

Pruitt was confirmed Friday afternoon, mostly along partisan lines in the Senate, after a process that featured much scrutiny of his statements about climate change, his relationships with the fossil-fuel industry and his history of litigation against the agency he's now leading. Two Senate Democrats, Heidi Heitkamp of North Dakota and Joe Manchin of West Virginia, voted for him. One Republican, Susan Collins of Maine, voted against him.

While Republican lawmakers and industry executives welcomed his nomination, it was met with opposition from environmental groups and from hundreds of former and current EPA employees, who argued that his track record shows little regard for environmental protection.

Pruitt's remarks were delivered in the Rachel Carson Green Room at the EPA, a large wood-paneled room named after the famed environmentalist whose 1962 book, Silent Spring, helped galvanize a movement that eventually led to the EPA's founding. About 75 EPA employees were on hand -- attendance at the event was optional, and staff members also could listen or watch online -- along with members of President Donald Trump's administration and dozens of reporters.

News reports have suggested that Trump is on the verge of signing a number of executive orders to roll back Obama priorities on the environment, including the Clean Power Plan, which restricts greenhouse gas emissions from power plants, and the Waters of the U.S. regulation. But Pruitt in his remarks made no explicit mention of planned policy changes, instead focusing on what he said were a set of principles by which he would guide the agency.

Pruitt was introduced at the event by Catherine McCabe, who had served as acting administrator until Pruitt's confirmation. Her remarks about his background did not mention the many occasions when he, as Oklahoma attorney general, had filed lawsuits against the agency.

"Civility is something I believe in very much," Pruitt told the employees. "We ought to be able to get together and wrestle through some difficult issues and do so in a civil manner." He also noted that the "process" and "rule of law" matter greatly at the EPA. By contrast, he did not talk much about the agency's goals, such as preserving clean air and clean water.

"Federalism matters," Pruitt said, pledging to forge close relationships with the states as he carries out his role. But states are likely to be highly divided over any attempt to undo Obama environmental regulations, with states such as Massachusetts, New York and California likely to oppose such efforts through state-level lawsuits much like the ones that Pruitt participated in during Obama's administration.

At one point, Pruitt quoted John Muir, the founder of the Sierra Club -- which provoked a quick response from the environmental group's executive director, Michael Brune, that "John Muir is rolling over in his grave at the notion of someone as toxic to the environment as Scott Pruitt taking over the EPA."