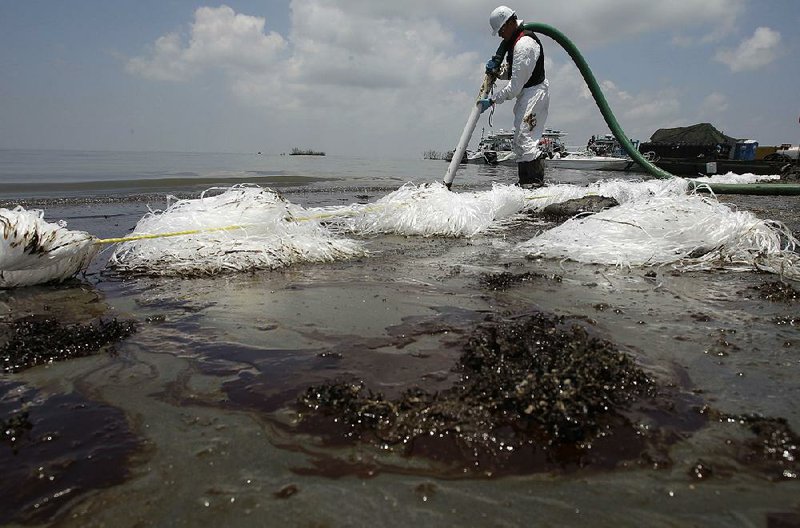 A worker uses a suction hose in June of 2010 to remove oil washed ashore from the Deepwater Horizon spill, off the coast of Louisiana.

WASHINGTON -- The Trump administration is poised to roll back offshore drilling safety regulations that were put in place after the 2010 Deepwater Horizon oil rig disaster in the Gulf of Mexico that killed 11 people and caused the worst oil spill in U.S. history.

A proposal by the Interior Department's Bureau of Safety and Environmental Enforcement, which was established after the spill and regulates offshore oil and gas drilling, calls for reversing the previous administration's regulations as part of President Donald Trump's efforts to ease restrictions on fossil fuel companies and generate more domestic energy production.

Doing so, the agency asserted, will reduce "unnecessary burdens" on the energy industry and save the industry $228 million over 10 years.

"This proposed rule would fortify the Administration's objective of facilitating energy dominance" by encouraging increased domestic oil and gas production, even as it strengthens safety and environmental protection, the proposal says.

The agency published its proposed rule in the Federal Register on Friday, and the public has 30 days to comment on the plan.

Industry groups like the American Petroleum Institute have long opposed the safety rules, calling them "flawed and costly." The fossil fuel interest group warned in 2015 that the regulations would reduce capital investment in the Gulf by $4 billion a year and threaten 50,000 industry jobs.

The rules from the administration of President Barack Obama, written in 2016, tightened controls on blowout preventers, devices that are intended to stop explosions in undersea oil and gas wells, and called for rig operators to have third parties certify that the safety devices work under extreme conditions. In the Deepwater Horizon spill, a supposedly fail-safe blowout preventer failed after a section of drill pipe buckled.

Nearly 1 million coastal and offshore seabirds are estimated to have died in the spill, which spewed 4.9 million barrels of oil into the sea.

Environmental groups warned that reversing the safety measures would make the United States vulnerable to another such disaster.

"Rolling back drilling safety standards while expanding offshore leasing is a recipe for disaster," Miyoko Sakashita, director of the oceans program at the Center for Biological Diversity, said in a statement.

The rules developed under Obama would have applied mainly in the West, where most federal lands are located. Companies would have had to disclose the chemicals used in the process, often called fracking, which pumps pressurized water underground to break open hydrocarbon deposits.

The rules were supposed to take effect in 2015, but a federal judge in Wyoming blocked them at the last minute. In September, the 10th U.S. Circuit Court of Appeals in Denver declined to rule in that case because the Trump administration intended to rescind the rules.

Information for this story was contributed by The Associated Press.