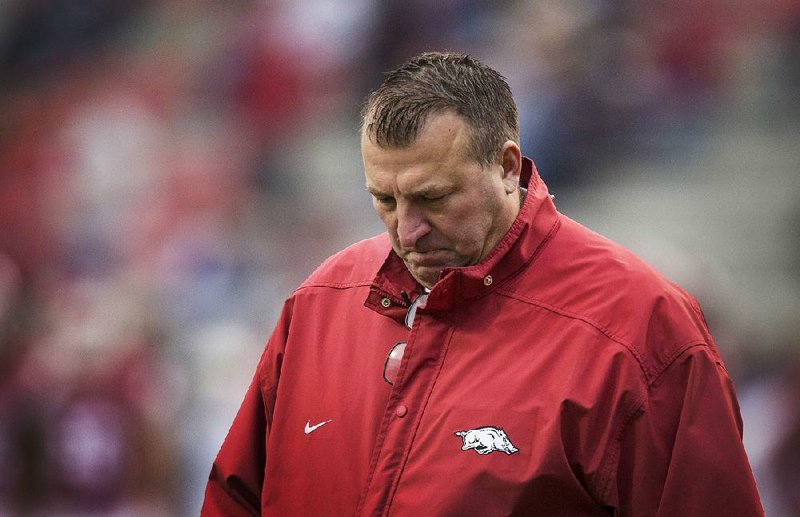 Bret Bielema’s time as Arkansas’ coach came to an end after a 4-8 season, including a 1-7 mark in SEC play and a 3-4 record in home games. The Razorbacks lost a school-record five games by more than 20 points.

Former University of Arkansas, Fayetteville football Coach Bret Bielema's deal with the Razorback Foundation set his buyout at $15.4 million if the university fired him in 2017, according to a copy of the agreement released late Thursday under the state's open-records law.

That number matches an amount listed in Bielema's public employment contract with the university, which fired him Nov. 24 at the conclusion of a 4-8 season.

The employment contract with the university included language saying that figure was to be plugged into a formula to determine the "total [buyout] payment," which equated to about $5.9 million, the Arkansas Democrat-Gazette previously reported.

But Bielema's agreement with the Razorback Foundation does not mention a formula, instead saying "the amount specified in this paragraph shall be the total amount that will be paid." The nonprofit, funded by donors to support university athletics, is responsible for the final agreement with Bielema and for paying his severance.

Confusion about buyout terms lingered throughout Bielema's fifth season -- which marked the fourth time in two decades that the team won fewer than five games -- and persists today as Bielema and the foundation continue working toward a "release agreement" that would finalize his buyout.

ESPN, citing one anonymous source, reported Dec. 2 that Bielema and the athletic program agreed to an $11.8 million "negotiated buyout" that would be signed within a "few days." Local media covered the ESPN report, but it does not appear that anyone has independently confirmed the details.

Scott Varady, the foundation's executive director, said Thursday evening in a brief email that its release agreement with Bielema has not been finalized.

"I can share that we continue to work with Coach Bielema's agent on the final release agreement," Varady said. "We have not completed that process yet."

Bielema's agent, Neil Cornrich, did not return a phone message.

UA Trustee Tommy Boyer said the university system's governing board has not been part of the discussions.

UA released a copy of Bielema's "personal services and guaranty agreement" with the foundation hours after Arkansas Attorney General Leslie Rutledge issued a formal opinion saying that the document could be released under the Arkansas Freedom of Information Act.

Bielema's agreement with the Razorback Foundation is dated Feb. 6, 2015, just more than a month after the Razorbacks beat the University of Texas 31-7 in the Texas Bowl and the same day Bielema's contract extension went into effect with UA.

Bielema's original contract in 2012 with UA listed a chart with buyout amounts and included language that the figures in the chart should be plugged into a formula. The contract extension in 2015 laid out a new chart with higher figures but maintained that "all other text, terms and conditions ... shall remain the same and shall not be modified in any way by this First Amendment."

Under that formula, the Democrat-Gazette took the $15.4 million and divided it by 97 -- the span of Bielema's employment from Dec. 4, 2012, through the end of his most recent contract, Dec. 31, 2020. The newspaper then took that figure and multiplied by 37 -- a rough figure that included the month of December 2017 and the remaining three years of Bielema's contract. It totaled $5.87 million.

Bielema's deal with the foundation includes the same chart as his contract extension but does not refer to the formula included in the original contract.

Through his agent, Bielema requested that Rutledge issue an opinion on whether his deal with the Razorback Foundation should be released to the Arkansas Democrat-Gazette in response to an Arkansas Freedom of Information Act request filed Dec. 6.

Rutledge determined that the open-records law applied because of "substantial" and "understandable" public interest in what it contained. Her opinion is nonbinding.

UA initially planned to release the document Dec. 21 after locating a copy in the University of Arkansas System's legal office, spokesman Mark Rushing had said.

"It seems beyond question that the public's interest in the record at issue is substantial," Rutledge's opinion says. "The subject matter has been intensely scrutinized by the media. And there is a very high level of public interest in documents bearing on the former employee's departure from the University -- a level of interest that is understandable given his prominence and the importance of the matter to the local community."

The Democrat-Gazette filed open-records requests in October for the agreement with both the university and the system. At the time, neither provided the document.

Rutledge's opinion was limited to whether the university should release the system's copy of Bielema's agreement with the foundation. Her opinion, and the issue before her, did not address the broader question of whether the open-records law should apply to the Razorback Foundation.

The foundation has denied Democrat-Gazette requests for the agreement, its contract with the search firm retained to help pick Bielema's replacement and other documents.

The newspaper argued that the records constitute public business and should be released, based on a 1990 Arkansas Supreme Court ruling. Varady has said the state's open-records law does not apply to the nonprofit foundation because it does not receive public money and operates independently of the university.

Long is due $4.6 million in total severance pay through June 2022, according to a release agreement he signed Nov. 24 with UA. That sum would be offset by wages Long earns as an administrator or consultant for a university or professional sports team, according to the deal.

Morris signed an offer letter for a six-year contract with a base salary of $3.5 million per year, not including potential incentives and retention payments. He also will enter into a personal services agreement with the Razorback Foundation, the letter says.

UA's athletic department, through the Razorback Foundation, will pay up to $2 million to cover Morris' buyout with SMU, Rushing has said.

Yurachek's five-year contract is for $850,000 per year -- a $525,000 base salary and $325,000 for speaking engagements and other personal services, according to his offer letter. He will not have a separate agreement with the foundation.