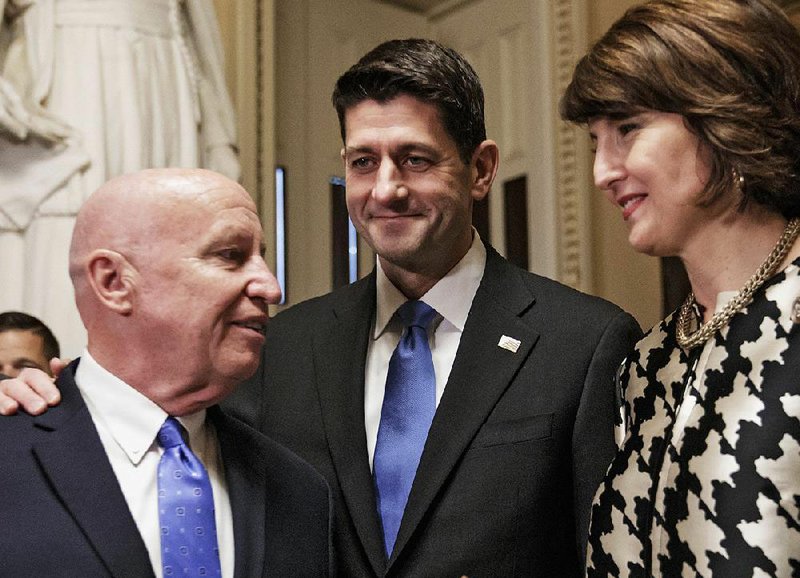 Senate Republicans early today passed the most sweeping rewrite of the nation's tax laws in more than three decades, setting the stage for a final House vote.

The House passed the bill earlier Tuesday, but the Senate had to make minor changes so the measure would comply with Senate budget rules.

The Senate vote was 51-48, with all Republicans in favor and all Democrats opposed. The measure now moves back to the House for a final vote today.

Senate Republicans had hoped their vote would put the bill in President Donald Trump's hands to sign. But the chamber's parliamentarian Tuesday afternoon ruled that three provisions violated the chamber's Byrd Rule -- guidelines on what types of legislation can pass with 50 votes.

The parliamentarian took issue with a provision allowing for tax-incentivized accounts for home-schooling expenses, as well as one dealing with exempting certain universities' endowments from a new excise tax. The third had to do with the abbreviated name of the legislation. Democrats raised the provisions with the parliamentarian in a bid to delay the bill.

The Senate voted to strip those provisions from the bill.

Earlier in the day, the House passed the plan 227-203. All but 12 Republicans voted for the bill. No Democrats supported it.

Despite the delay, Republicans responded to the House vote by celebrating the anticipated passage of their tax plan, which would be their first major legislative victory since taking control of government in January.

"This is one of the most important pieces of legislation Congress has passed in decades ... for all those millions of Americans struggling paycheck to paycheck, help is on the way," House Speaker Paul Ryan, R-Wis., said after the House vote. "This is a good day for workers ... and a great day for growth."

Senate leaders, who worked for months to negotiate a bill they could pass despite holding only a slim majority, also hailed the bill on Tuesday.

"Congress is standing at the doorstep of a historic opportunity," Senate Majority Leader Mitch McConnell, R-Ky., said as he announced plans for the Tuesday night vote. "Here's what we set out to do: Take money out of Washington's pockets and put it back in the pockets of middle-class Americans."

Trump has for months pushed Congress to send him a tax plan by Christmas. The core of the plan is a major and permanent cut to the corporate tax rate, dropping it from 35 percent to 21 percent.

The plan would also cut individual tax rates for all income tax levels. The largest cuts would go to the wealthy, but in 2018 nearly all Americans will see their income taxes go down, according to a nonpartisan analysis of the final plan released Monday. Families earning less than $25,000 a year would receive an average tax cut of $60, while those earning more $733,000 would see an average cut of $51,000, according to the nonpartisan Tax Policy Center.

Many of the individual tax breaks are set to expire in coming years. Republicans set those expiration dates to comply with Senate limits on how much their bill could add to the nation's deficit. They say a future Congress will extend them or make them permanent. Without that promised intervention, the measure would raise taxes on 53 percent of Americans by 2027, according to the center's report.

The sprawling measure makes other major changes and would affect nearly every American business and household. It would restructure a complicated system of deductions, shrinking some and expanding others. The standard deduction, taken by many middle- and low-income households, would double, and a child tax credit would be expanded.

Other provisions taxpayers use to reduce their bills, including a deduction on interest paid on new home mortgages and a provision allowing Americans to deduct what they pay in state and local taxes, would be shrunk.

The bill would also reduce the estate tax, a levy on inheritances paid only by the wealthiest estates. Under the bill, a couple could pass on up to $22 million in assets without paying the tax.

And it would void a Patient Protection and Affordable Care Act requirement requiring nearly all Americans to obtain some form of health coverage or pay a penalty. The change is projected to reduce government spending by $300 billion over a decade but also eventually leave 13 million more people with no health insurance.

She again said that the president would not release his tax returns, the only way that experts can determine precisely how the tax bill would impact his personal finances.

The tax package, on the surface, appears hugely beneficial to the Trump family. It continues many favorable tax preferences for commercial real estate that were curtailed for other industries, cuts the top income tax rate from 39.6 percent to 37 percent, and doubles the inheritance that Trump's children can shield from taxation, to $22 million.

Of the 12 Republicans in the House who voted against the bill, 11 represent districts in New York, New Jersey or California. Those states are expected to be hit hard by the bill's reduction of the state and local tax deduction, which helps those in high-tax states.

"Many in my area could face higher taxes under this plan," Rep. Darrell Issa, R-Calif., one of the no votes, said in a statement before the vote. "Californians have entrusted me to fight for them. I will not make the incredible tax burden they already endure even worse.'

Said Rep. Lee Zeldin, R-N.Y.: "This bill remains a geographic redistribution of wealth, taking extra money from a place like New York to pay for deeper tax cuts elsewhere. New York is a net contributor that now will be contributing even more."

Another New York Republican, Rep. Peter King, conveyed what people in his Long Island, N.Y., district were telling him about the tax bill: "Nothing good, especially from Republicans. ... It's certainly unpopular in my district."

Rep. Rodney Frelinghuysen, R-N.J., also voted against the bill. Frelinghuysen is chairman of the House Appropriations Committee, and it is rare for committee chairmen to oppose major legislation.

The only Republican to change from a no vote to a yes vote was Rep. Tom McClintock of California.

Meanwhile, the four House members from Arkansas, all Republicans, voted for the tax legislation.

In statements, they all praised the overhaul.

Reps. Steve Womack of Rogers and Bruce Westerman of Hot Springs described the cuts as a victory for "hardworking Americans" while Rep. French Hill of Little Rock said it would benefit "hardworking Arkansas families."

Womack said the bill lets taxpayers "keep more of their paycheck, creates jobs and increases wages by making American businesses competitive again, and simplifies a code that has become riddled with loopholes."

"For the first time in a generation, the American people will see real, tangible tax relief something I was proud to deliver for the people of the Fourth District," he added.

Rep. Rick Crawford of Jonesboro said taxpayers in his northeastern Arkansas district will come out ahead.

"On top of making it simpler to file every year, the vast majority of middle-income families in my district will get to keep more of their money to use as they wish, and 1st district businesses, both large and small, will be able to invest in new employees, assets, or pay raises," he said.

The House vote itself was chaotic, with a handful activists sitting in the public gallery repeatedly interrupting Republicans as they introduced the tax measure. Several of them were escorted out by Capitol Police.

At one point, an activist yelled, "You are lying to yourselves!" and told House Republicans they needed to go back to school to learn math, which elicited laughter among the Democrats on the floor.

A woman in a wheelchair chanted, "Shame! shame!" as she was removed from the gallery.

At another point, someone on the Republican side of the chamber shouted toward the activists, "Throw her ass out!"

Nearby sat Treasury Secretary Steve Mnuchin and a handful of staff members, who also watched the proceedings from the public gallery.

The Republican caucus rose in near unanimous applause after the final vote was counted, then went to congratulate Ryan and House Ways and Means Committee Chairman Kevin Brady with smiles and pats on the back.

The Senate also faced protests, with demonstrators interrupting the vote with chants of "kill the bill, don't kill us."

Visitors in the Senate gallery stood up shortly after the vote began and started chanting. Vice President Mike Pence, who was presiding, stopped and repeatedly called on the sergeant at arms to restore order in the gallery.

Republicans have touted their bill as a middle-class tax cut and promised it would produce enough economic growth to boost hiring and workers' wages and would create enough revenue to keep it from adding to the deficit.

In an analysis of an earlier version of the bill, the Joint Committee on Taxation, Congress's official tax scorekeeper, projected it would add $1 trillion to the deficit over a decade, even when projected economic growth is taken into account. That figure would grow substantially if the individual tax cuts were extended, and Republicans predict they will be.

The Joint Committee on Taxation projected that the earlier version of the plan would boost economic growth by 0.8 percent over a decade, far lower than the 3 percent growth Republicans on Tuesday promised their plan would unlock.

Democrats unanimously oppose the plan but lack the votes to block it in either chamber. The sidelined minority's members have spent months bashing the plan as a giveaway to corporations and the wealthy.

"It's disgusting smash-and-grab. It's an all-out looting of America, a wholesale robbery of the middle class," House Minority Leader Nancy Pelosi, D-Calif., said after the vote. "The GOP tax scam will go down, again, as one of the worst, most scandalous acts of plutocracy in our history."

Polling suggests the public is broadly skeptical of the plan. But Ryan said he had "no concerns whatsoever" about the bill's polling, arguing that public support would swing in favor of the package once they see their after-tax incomes rise.

"Results are going to make this popular," Ryan said.

Information for this article was contributed by Jeff Stein and Damian Paletta of The Washington Post; by Stephen Ohlemacher, Marcy Gordon, Matthew Daly, Kevin Freking and Alan Fram of The Associated Press; and by Frank E. Lockwood of the Arkansas Democrat-Gazette. 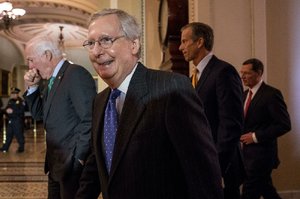 Photo by AP/ANDREW HARNIK
“Congress is standing at the doorstep of a historic opportunity,” Senate Majority Leader Mitch McConnell said Tuesday, hours before the Senate approved the bill 51-48. 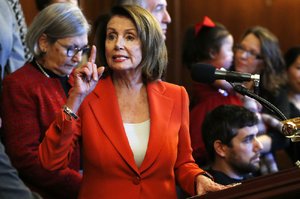 Photo by AP/JACQUELYN MARTIN
After the vote Tuesday, House Minority Leader Nancy Pelosi said the Republican tax bill is a “disgusting smash-and-grab. It’s an all-out looting of America, a wholesale robbery of the middle class.”