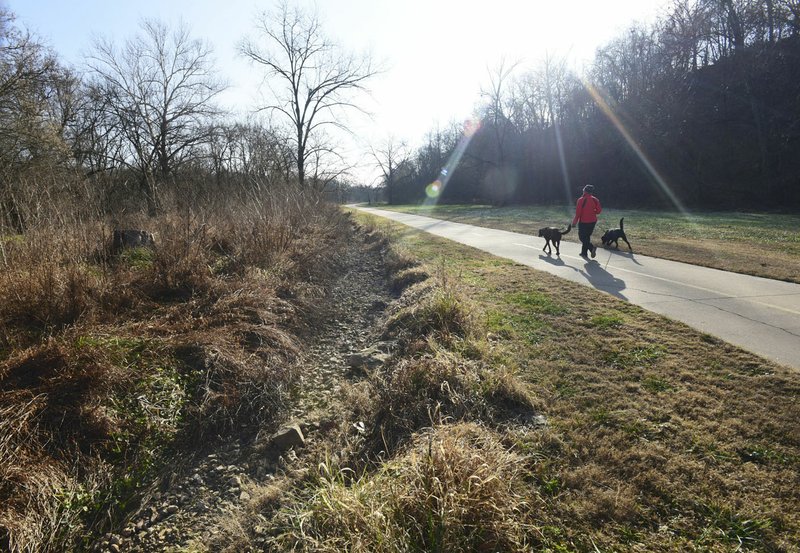 NWA Democrat-Gazette/SPENCER TIREY Irma Holasek walks her dogs Friday on the Razorback Greenway by Town Branch Creek where debris and flooding in the creek has caused it to create a new channel near the trail. Bentonville and Rogers have received several grants from the Walton Family Foundation. One grant is to restore the creek and correct the issue.

Some older sections of the Razorback Greenway will be improved and brought into compliance with industry design standards thanks to two Walton Family Foundation grants.

The greenway opened as a 37-mile trail in 2015, but sections in Bentonville and Rogers were already built and incorporated into the larger project, said Erin Rushing, executive director of NWA Trailblazers, a nonprofit organization developing cycling and pedestrian infrastructure.

Some of the older pieces don't meet regulations set by the American Association of State Highway and Transportation Officials. Some regulations weren't created yet and others weren't adhered to when the older trails were built, Rushing said. Examples include objects being too close to a trail, slopes off the trail being too steep and turn radii being too tight.

"We want to make it one continuous project where it's more uniform and safe," Rushing said.

The most noticeable on the more than 20-project list Wright and Rushing developed will be a new parking lot northeast of Bella Vista Lake, Wright said. Portable toilets will be removed and a restroom will be built.

The lot will be smaller but more efficient than the one there now, Wright said. A greenspace barrier will be put in place that guides the trail from the east side of the lake through the parking lot to where the trail runs on top the dam. A connection to the trail is being built north of the parking lot that connects to Blowing Spring Trail.

"I think those will make a big improvement out at Bella Vista Lake for the trail users," Wright said. "It's one of, if not, the most popular trails."

Another parking lot will be built at Northeast Cub Circle and Tiger Boulevard. The lot will serve as a Slaughter Pen Mountain Bike Park trail head. This will include adding 350 linear feet to the Greenway, according to meeting documents.

Other projects include painting the tunnels on Wishing Springs Trail bright white for better visibility, replacing the wood bridge on Town Branch trail with a concrete structure and straightening out a few sharp curves.

Wright said he anticipates all the projects to be finished in about 18 months.

Rogers City Council accepted its grant from the foundation in November.

"They did the legwork on costs and projects," McCurdy told Rogers council members Nov. 28. "Almost all fix issues with the greenway in Rogers, such as sharp 90-degree turns ... to make it safer."

Some of the problem areas include New Hope Road and Interstate 49, Stone Manor Street and near Rife Medical Lane. Plans include 500 feet of new trail to connect the greenway to Pinnacle Hills Promenade.

Trail ownership and maintenance are closely correlated, but it's common for the maintenance of government-owned trails to be supplemented by nonprofit organizations and with volunteer labor hours, according to Rails-to-Trails Conservancy, an organization focused on creating more walkable, bikeable communities.

Many nonprofit trail groups pay for maintenance through membership dues, donations, fundraising events and foundation grants, according to a report by the Conservancy.

The Walton Family Foundation is also working with Bentonville to restore a section of Town Branch Creek to protect the greenway from structural damage caused by flooding.

The affected section of the creek is between the North Bentonville Trail -- the local name of that portion of the greenway -- and Armadillo's Last Stand single-track trail in Slaughter Pen.

Commercial and residential development over the years has increased stormwater runoff. Rock and gravel debris piled up, creating gravel bars that dammed the creek, causing it to create a second channel within five feet of the North Bentonville Trail, Wright said.

"It's jeopardizing the structural integrity of the trail," Wright said. "It's undercutting it in places."

The city initially planned to leave the creek alone, elevate the trail and set aside $115,000 for that this year, but the foundation asked city officials to consider returning the creek to its original channel. The city estimated that solution would cost $286,250 and the foundation agreed to pay for the difference with a grant, according to city documents.

Council agreed to hire the Watershed Resource Conservation Center to do the work for an amount not to exceed $286,250.