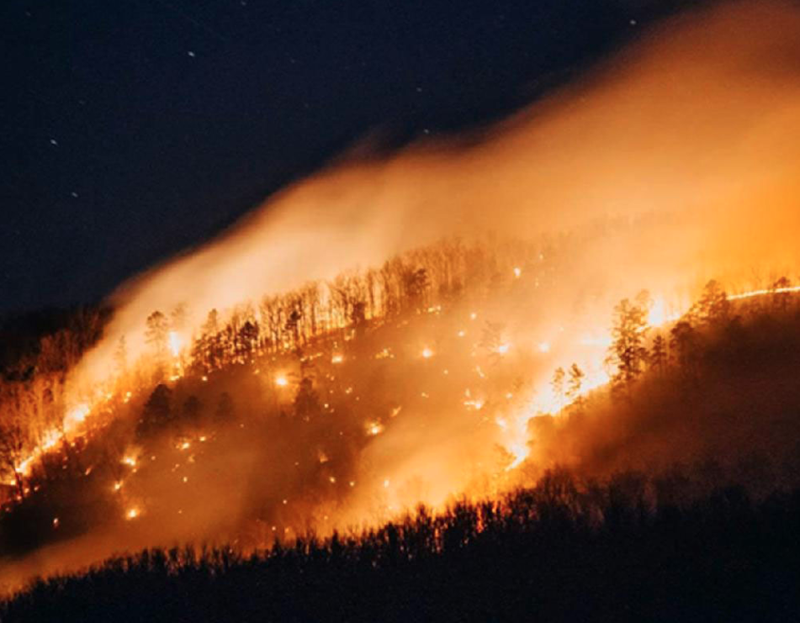 Wildfires break out along Arkansas 21 on the north side of Boxley Valley on a combination of private and national parklands. Crews from several agencies — Buffalo National River’s Fire Module, the Arkansas Forestry Commission and the Deer, Ponca, and Mount Sherman volunteer fi re departments — provided the initial response.

Crews battled to a standstill a fire that was fanned by high winds and that challenged firefighters who had to deal with steep, rugged terrain in the Buffalo National River area Monday.

Two fires that were reported about noon Sunday along Arkansas 21 on the north side of Boxley Valley fused into a single blaze Monday but remained in an area firefighters carved out to contain it.

The fire, on private and National Park Service land, was 10 percent contained when firefighters quit for the night about 8 p.m. Sunday, the news release said.

In addition to the high winds that whipped up and spread the fire on ridge tops Monday, much of the containment efforts were on or near vertical hillsides in very rough terrain, the release said.

"Although the wildfire is still burning, it is staying within the designated containment area in spite of very high winds and dry fuel," the release said.

The fire is burning mostly the dry leaves, debris on the ground and fallen limbs, much of it dead wood from the 2009 ice storm, Clark said.

Clark said the edge of the fire was about 8 miles from a famous Arkansas landmark, Hawksbill Crag at Whitaker Point, but there was no danger the fire would reach it.

Crews from the Buffalo National River's Fire Module, the Arkansas Forestry Commission and the Compton Volunteer Fire Department fought the fire Monday. No injuries have been reported, Clark said.

The Park Service said the cause of the fire remained under investigation Monday.

The Park Service at the Buffalo River has restricted open fires or camp fires in the back country and on gravel bars since Nov. 30, according to its website. The notice said the restrictions were set because of the extreme dry weather and in concert with county burn bans.

The Park Service stated that open fires continued to be allowed in established campgrounds and day use areas.

Open fires are allowed in metal fire rings and pedestal grills in developed camping and day use areas. Charcoal, propane and other contained fuel for grill use was allowed. Outdoor smoking was permitted, but the Park Service warned smokers to use extreme caution when smoking and in disposing of smoking material.

Also Monday, a Baxter County man, Joseph David Young, was arrested on a violation of the county's burn ban, criminal mischief and driving on a suspended license, according to a news release from the Baxter County sheriff's office. He was being held in lieu of $2,535 bond and has a court appearance scheduled for Jan. 18.

According to the news release, Young told deputies he was burning boxes outside his home at 6032 County Road 55 and the fire got away from him and spread. Firefighters with the Tracy Volunteer Fire Department and the Salesville and Mountain Home fire departments responded to the fire alarm.

The National Weather Service in Little Rock issued a red-flag warning covering most of the state from Fayetteville to Jonesboro and from Mountain Home to Monticello.

Red-flag conditions, which were predicted to be present Monday afternoon, were a combination of wind, very low relative humidity and low fuel moisture levels. Even areas with little wind are in extreme drought with low humidity that still will generate dangerous wildfire conditions, according to the weather service.

No rain is forecast in the state for the next several days, so the high danger of wildfires will persist, according to the weather service. Daytime high temperatures were forecast to range from the mid-40s to the 60s.

In Arkansas, 58 counties were under burn bans Monday. Most counties not under the bans were in eastern and southern Arkansas.

One county, Pope, stood out as the only county in the center of the state not under a burn ban Monday. County Judge Jim Ed Gibson said he hadn't issued the ban because the county had received 0.7 inches to 1.5 inches of rain early last week. But he said officials were monitoring the conditions and probably would issue a ban soon.

The Forestry Commission rated the wildfire danger high for the entire state.

Weather service data show 72 percent of Arkansas was either in severe or extreme drought.

Harrison, near where Monday's Buffalo River fire was burning, had received less than four inches of rain from Sept. 1 through Nov. 30, or 32 percent of its normal rainfall. 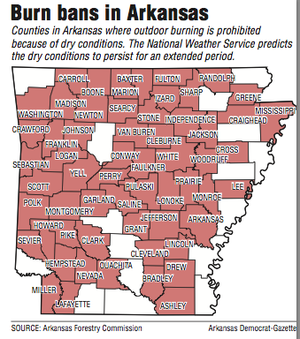 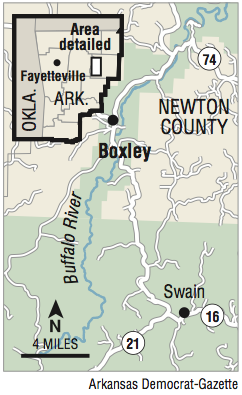