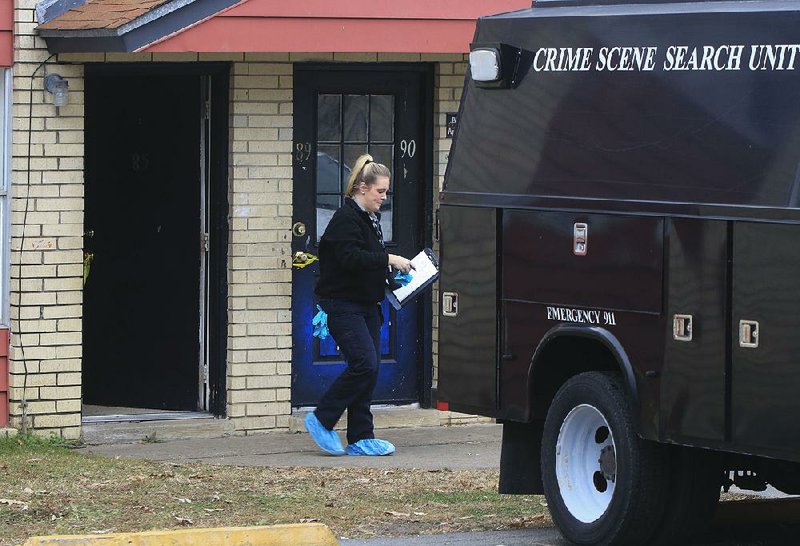 Little Rock police officers are investigating the deaths Tuesday of three people, including two young children, whose bodies were found inside an apartment in the 6600 block of Lancaster Road.

Police on Tuesday were investigating a triple homicide after authorities found the bodies of two children and a 24-year-old woman inside an apartment in southwest Little Rock.

Officer Steve Moore, a Police Department spokesman, said Tuesday afternoon that the woman is believed to be the mother of the children, but police were still trying to confirm that relationship and did not disclose the victims' names. The bodies of the woman and the children, ages 4 and 5, were found inside a unit at Rosewood Apartments, 6600 Lancaster Road, authorities said.

A family member discovered the bodies after the woman could not be reached by phone and the children did not show up for school, Moore said. He said the children were a boy and a girl, but he did not know which child was older.

"[We're] checking the area for anybody that might have seen anything, anybody that might know anything that's going on," Moore said at the scene, where police blocked off a large area of the parking lot outside the apartment building. He said the detectives were investigating how the victims were killed and were working to determine the last time they were seen alive.

Officers were originally dispatched to the apartment complex around 2:05 p.m. for a report of suicide and other deaths, but Moore said police are investigating all three deaths as homicides.

"It's still early in the investigation," he said.

Moore said at the scene that detectives did not have any concrete information on any suspect.

Police on Tuesday had located the woman's vehicle, a 2004 Honda Accord.

Moore said he did not know whether the killings were random.

At the scene, Alma Dennis, a great-aunt to the 24-year-old woman, hugged her family members.

Dennis said she found the bodies at the apartment Tuesday afternoon and saw her great-niece near the door of a bedroom. She said the woman had her arm around one of the children. Another relative was also with Dennis when she went to the apartment complex, she said.

Dennis described the young mother as a hard worker who held multiple jobs to support her children.

"One of the kindest people you would ever want to know," she said.

The deaths raise the total number of homicides in Little Rock to 55 so far this year. The city has seen an uptick in homicides compared with last year, when authorities recorded 42 homicides.

Police data show that the record number of homicides was in 1993, when Little Rock logged 76.

This year's homicide count has become a marker for a violent year in Arkansas' capital city. Preliminary department data show that violent crimes were up 8 percent from Jan. 1 to Nov. 27, compared with the same period last year.

The number of nonfatal shooting victims in Little Rock also has increased every year since 2014, department records show.

The two children found in the apartment Tuesday are among the youngest homicide victims in Little Rock this year.

Moore said that at one time the killing of children was "very rare," but it seems to have happened far too many times in the past year.

Including the most recent homicides, records show seven children have been killed in Little Rock this year.

Moore, a former homicide detective, also referred to the 2016 killings of 2-year-old Ramiya Reed and 3-year-old Acen King, who were fatally shot in separate incidents while riding in vehicles with family members.

"When it's kids," he said. "It makes it that much more difficult." 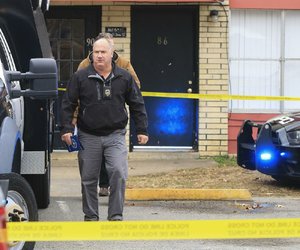 Photo by Staton Breidenthal
FILE — A Little Rock police detective leaves an apartment where the bodies of three people, including two young children, were found in the 6600 block of Lancaster Road. 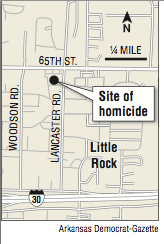