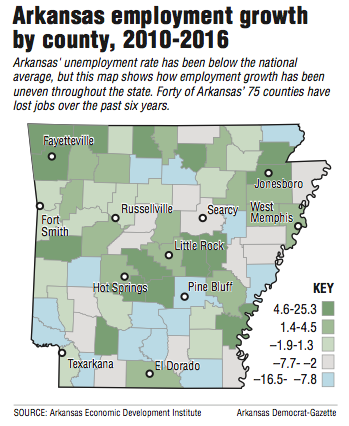 Arkansas' low unemployment rate has been better than the U.S. average, but it is unevenly spread across the state, which points to modest economic growth in the near future, the chief economist for the Arkansas Economic Development Institute said Friday.

Only three of the state's major urban centers -- Fayetteville, Little Rock and Jonesboro -- have seen an increase in jobs since 2007, according to Michael Pakko, who also serves as the state economic forecaster at the institute, which is part of the University of Arkansas at Little Rock. Of the state's 75 counties, 40 have lost jobs in the past six years, he said.

Pakko, along with James Bullard, president of the Federal Reserve Bank in St. Louis, spoke at the Little Rock Regional Economic Briefing held Friday at the Clinton Presidential Center.

The employment picture in Arkansas is reflected in other areas that make up economic activity, including gross domestic product growth, which has remained stagnant in east and south Arkansas, Pakko said.

"Geographically, the gains in the economy have been very uneven," he said. "We all know how well the economy is doing in Northwest Arkansas. Northeast Arkansas is also doing well, and central Arkansas is doing OK as well. But many parts of the state have been left behind.

"The outlook for the future is -- perhaps slow is too strong a word -- really, modest economic growth going forward is what I would characterize it as. The fact that it is positive economic growth is better than the alternative."

Pakko said his forecast models show indications of weakening economic activity by 2019, but he said the uncertainty increases the further out the models go.

Part of the weakness is reflected in the fact that 53 of Arkansas' 75 counties have lost population in recent years, he said.

"It is particularly clear we've seen population growth in the urban areas of the northwest, Craighead County, central Arkansas continues to grow," Pakko said. "But the Delta, the east side of the state, across the southern tier has negative population growth, which carries over into negative economic growth in some cases."

The low unemployment rate masks what Pakko called a "real remarkable transformation" in the state's jobs profile, which has contributed to the unevenness in job growth.

The state has lost 30,000 jobs in the manufacturing and construction sectors since 2007, Pakko said. By contrast, the state has gained more than 30,000 jobs in business and professional services, education and health services and leisure and hospitality services, he said.

"It's really in the service provider sectors that we've had job growth take place at the expense of the producing sectors," Pakko said. "That's really been a transformation shift of labor demand, not only in Arkansas but across the nation as well."

And the state's unemployment rate doesn't look all that good when the labor force participation rate is factored, Pakko said. It also is a factor in the state's lagging economic growth.

"When people drop out of the labor force for one reason or another to pursue other options, that ends up making the unemployment rate go lower," he said. "On the flip, fewer people are engaged in economic activity."

But while the labor force participation rate fell nationwide, it fell more in Arkansas and has been slow to recover, according to Pakko.

"We've gone from about 63 percent before the last recession down to 58-59 percent," he said. "So that's a much larger percentage point drop we saw for the nation as a whole. What that means is that smaller fraction of Arkansans are engaged in productive activity in the economy."

The labor force participation rate has seen a profound decline among what Pakko called "prime-aged males," or those ages 35 to 55, which he called a "bit puzzling and disturbing."

"While the unemployment rate is very low, it is excluding a lot of workers that apparently have dropped out of the labor force altogether," Pakko said.

The decline in the labor force participation rate among males has proved to be a conundrum for economists, Bullard said in a briefing with reporters after Friday's meeting.

"There's also been a trend there for males, especially since the 1970s," he said. "It's been whittling itself down for quite awhile. I don't know any better than the labor economists. I'm not sure we have a clear theory about why that is. But as an empirical matter, it has been occurring for quite awhile."

Bullard said it might because of social changes that economists haven't been fully able to understand.

"The nature of households is changing over time," he said. "You have more, let's say, households with females as the leading incomer in the household, and you have other types of households that have been changing certainly since the 1970s. A lot of social change going on there."