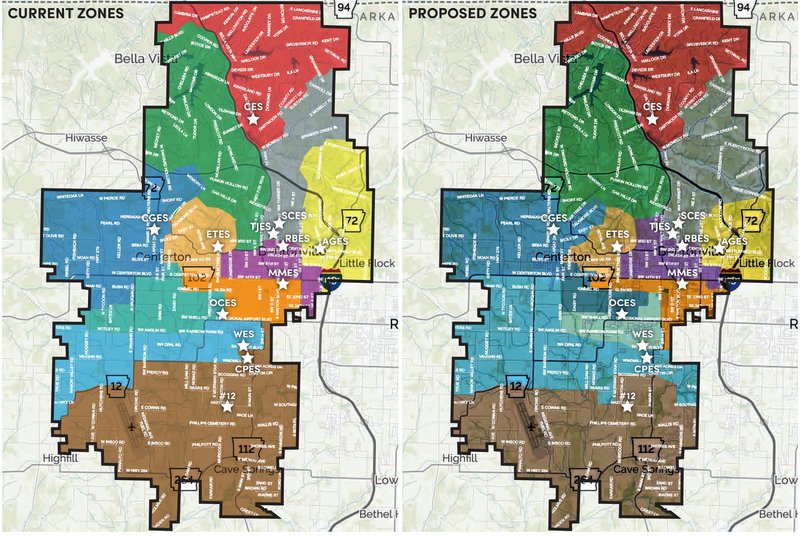 BENTONVILLE -- A proposal to change the School District's attendance boundaries for the 2018-19 school year would impact about 21 percent of students in grades three and under, according to district officials.

Administrators presented their rezoning plan for the first time at the School Board's workshop meeting Thursday. Elementary school is the only level being considered for rezoning. The board is expected to vote on the matter at its Dec. 18 meeting.

The topic of elementary school rezoning will be discussed at upcoming public meetings. Public input will be accepted at the last two meetings.

The proposal incorporates the district's 12th elementary school, which will be built on the district's south side in Rogers. That school isn't scheduled to open until the 2019-2020 school year.

Tanya Sharp, executive director of student services, said the push to implement elementary rezoning next year -- rather than at the time the 12th elementary school opens -- stems from concern about high enrollments at some of the schools, particularly Elm Tree and Apple Glen elementary schools.

Some board members expressed surprise Thursday administrators were talking about implementing rezoning next year instead of the year after.

Putting off rezoning a year would require installing portable classrooms at Elm Tree Elementary School -- where enrollment is 12 percent over capacity -- and possibly at some other schools, Sharp said.

Joe Quinn, a board member, said he'd be willing to explore that alternative. Travis Riggs, board president, said he'd like to put off rezoning as long as possible, but the mention of portable classrooms worried him.

"That's a great expense to put them in and then turn around and take them back out," Riggs said. "I don't know if that sits too well with me."

He added he was "caught off guard" by the administration's intention to implement rezoning next year.

Details of the plan may be found on the district's website, www.BentonvilleK12.org, under the "Zones/Rezoning" tab near the top of the home page. That includes current and proposed zone maps, answers to frequently asked questions, and an online form through which people may submit questions about the proposal.

Most of the impact of the administrators' proposal falls on students living south of Arkansas 102, but each school's zone would change at least a little bit.

Centerton Gamble, which serves one of the district's fastest-growing areas, would shrink by dropping a portion of its zone south of Arkansas 102 and another part that includes Arkansas 72.

Willowbrook's zone, which now stretches to the district's western border, would shrink dramatically and cover a small portion of south and southwest Bentonville.

The last time Bentonville rezoned at the elementary level was for the 2016-17 school year.

Superintendent Debbie Jones said the need to rezone stems from the district's growth in enrollment.

The district did its best under the rezoning proposal to keep neighborhoods together and consider future growth. They also tried not to affect neighborhoods affected during the previous round of rezoning, Jones said.