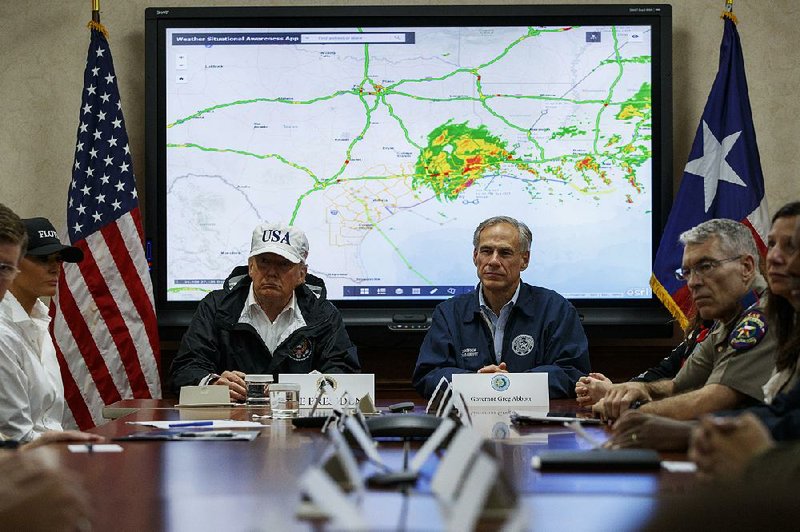 WASHINGTON -- President Donald Trump landed in Corpus Christi, Texas, on Tuesday to see for himself some of the damage caused by Tropical Storm Harvey and demonstrate his personal commitment to a region still in the grips of a historic natural disaster.

Trump -- who pushed aides to schedule a visit to Texas as early as possible after Harvey made landfall Friday night near Rockport, Texas, as a Category 4 hurricane -- initially considered touring San Antonio, which is outside the most hard-hit areas. But he settled on Corpus Christi because it was 30 miles from the most severely affected parts of the Gulf Coast and it suffered relatively light damage from the initial impact of the storm.

"It's a real team, and we want to do it better than ever before," Trump said of the response effort during a meeting with officials from local, state and federal agencies in a Corpus Christi firehouse. "We want to be looked at in five years, in 10 years from now as, this is the way to do it."

Gov. Greg Abbott of Texas, sitting next to the president, sought to allay concerns about the situation at the convention center in downtown Houston, where 10,000 residents fleeing rising floodwaters have crammed into a makeshift shelter designed to accommodate 5,000.

"This is not the Superdome," said Brock Long, director of the Federal Emergency Management Agency, referring to the nightmarish conditions residents of New Orleans endured while seeking shelter at a sports arena after Hurricane Katrina 12 years ago.

"At the convention center, we are sustaining food," added Long, who sat near the state's junior senator, Ted Cruz, who was briefly trapped by flooding in Houston on Monday.

The people at the convention center have security, Long said.

"I have an incident management team inside the city of Houston," he said. "And more and more people are being moved to shelters to stabilize the situation."

"All eyes are on Houston, and so are mine," added Long.

After conferring with emergency management officials, the president, accompanied by first lady Melania Trump, boarded Air Force One to travel north to Austin to meet with other officials before returning to Washington.

As he exited the firehouse, Trump was met with a crowd of about 1,000 people, some of them cheering. He grabbed a lone star Texas flag and shouted back to the crowd, "What a crowd!" he said. "What a turnout!"

"We are going to get you back and operating immediately," Trump told those who had gathered.

In Austin, the president heard from local and federal officials, including Ben Carson, his secretary of housing and urban development, at a meeting at an emergency management center in the state Capitol complex.

"Sounds like such an innocent name, Ben, right?" Trump said, remarking on the name Harvey. "But it's not innocent."

He had no plans to meet the mayor of Houston, Sylvester Turner, a Democrat.

"Due to the weather and all of the circumstances, it's a little bit more fluid today than a normal travel day," Sarah Huckabee Sanders, the White House press secretary, told reporters aboard Air Force One.

"The president wants to be very cautious about making sure that any activity doesn't disrupt any of the recovery efforts that are still ongoing, which is the reason for the locations we are going here today," she said. "As of right now, I don't know that we will be able to get to some of the really damaged areas."

Trump, his aides said, is eager to avoid the mistakes made in 2005 by President George W. Bush, who took a relatively hands-off approach to the federal response to Hurricane Katrina.

Vice President Mike Pence and federal officials from the Department of Homeland Security have taken the lead on managing many of the details of the response, but Trump has taken pains to emphasize his involvement in the crisis.

Abbott said Trump showed "genuine compassion" on the short flight to Austin as they watched video footage of the flooding in Houston.

"The president was heartbroken by what he saw," the governor said.

But Ari Fleischer, who served as press secretary to Bush, said there was something missing from Trump's remarks in Corpus Christi: "Empathy for the people who suffer."

"The first thing he should have said was that his heart goes out to those people in Houston who are going through this, and that the government is here to help them recover," Fleischer told Fox News Channel.

It's long been standard practice for the president to avoid visiting the most devastated areas of a natural disaster while recovery is still in the early stages, to avoid getting in the way or diverting critical resources. In Texas, residents seemed to understand.

Before Trump landed in Texas, Louis Sirianni arrived at his beach house in Rockport, about 20 miles outside Corpus Christi, to assess damage. Sirianni said he appreciated Trump's gesture and understood why there were no plans to take him into the hardest-hit area.

"He'd see enough if he came along here in a helicopter," Sirianni said on a balcony accessible only by a 12-foot aluminum extension ladder.

In downtown Rockport, John Murray had a pair of boards in front of his hair salon spray-painted with "Bet They Blame Trump."

"He could go for a walk and they'd find something to complain about," like jaywalking, Murray said.

"It's important that he sees the damage around the coast," Molina said. "I've never seen anything like it, and neither has anybody else."

The president pledged Monday to quickly pass an appropriations bill to deal with the damage to private property and public infrastructure.

While in Austin, Trump said it was a "sad thing" that the recovery would be a "long-term" operation.

Trump left Washington on a rainy morning, boarding Air Force One with an entourage of aides that included John Kelly, his chief of staff; Marc Short, his legislative affairs director and point man with elected officials in the region; and specialists from the Small Business Administration, who will assist local businesses with recovery loans.

Information for this article was contributed by Glenn Thrush of The New York Times and by Darlene Superville, Jill Colvin, Andrew B. Taylor and Kelly P. Kissel of The Associated Press. 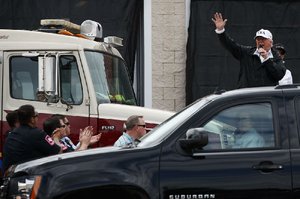