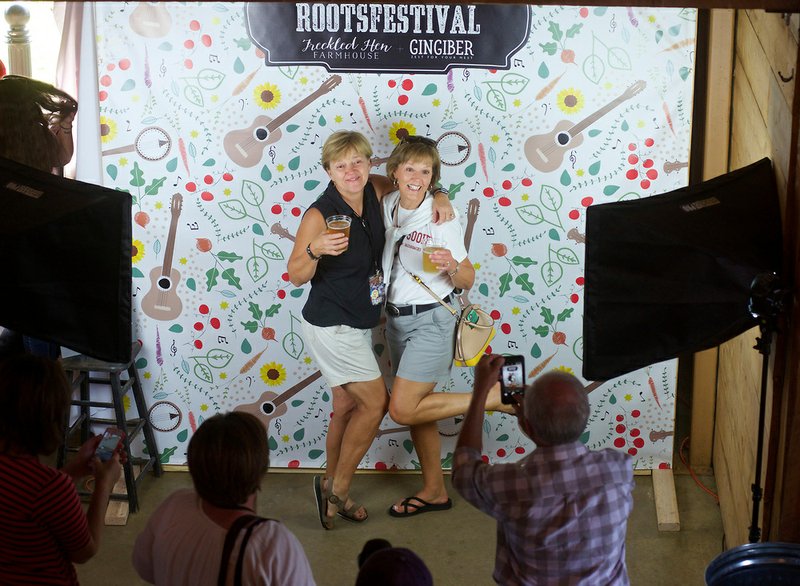 Day 2 of the 2017 Roots Festival opened with a special lunch hosted at Pratt Place Inn and Barn benefiting Feed Communities. Special guest P. Allen Smith addressed the crowd and spoke with the chefs behind the meal. That evening was also the VIP official opening party and food extravaganza.

• Special festival guest P. Allen Smith hosted the Feed Communities luncheon on the patio of Pratt Place Inn in Fayetteville on the beautiful sunny afternoon. Author, garden designer and television host, Smith thanked those in attendance for his successful 16 years with PBS and their support of the culinary culture of Arkansas.

• Smith and Feed Communities founder/board chair Denise Garner discussed some of Feed Communities' mission and successes with the lunch crowd -- highlighting the organization's efforts against hunger among Arkansas children and Arkansas seniors.

• Also in attendance at the luncheon were members of the Ralston family of Ralston Family Farms in Atkins. Smith shared his excitement over the family's sustainable practices in farming nine types of rice growing at their facilities, which will soon be available in grocery stores in Northwest Arkansas.

• Chefs Matt Bell of Little Rock's South on Main and Anne Carroll of Fayetteville's Farmer's Table created the fresh, summery meal for the lunch-goers, which comprised cantaloupes from Smith's own garden at Moss Mountain Farm, deviled eggs, an eggplant and cornbread panzanella, a pork-topped crostini and a melon salad with blackberry, mint and feta. The chefs shared some of their inspirations and thoughts on the dishes as well as pointed out the extensive amount of locally sourced, fresh ingredients.

Thursday evening, the VIP party also took place at Pratt Place Inn -- moving this year from the home of Hershey and Denise Garner. Guests were pleased with the ease of parking at the new location and responded positively to the venue.

• As in previous years, guest chefs were paired with local chefs -- serving as the sous chef for the evening -- and each pairing served a dish they created or prepared together.

• Guests dined on tasting-sized dishes featuring rabbit, shrimp, clam, tacos and more while interacting with the chefs, learning about flavor combinations and choices, and watching the chefs plate and serve.

• The barn at Pratt Place held the libations for the evening including beer from several local breweries, cider from Black Apple Crossing and cocktails provided by Pink House Alchemy.

• KUAF's Ozarks at Large hosts Kyle Kellams and Antoinette Grajeda, along with P. Allen Smith, emcee'd an evening of music as Northwest Arkansas favorite Matt the Electrician took the stage in the expanded performance area followed by festival acts The River Whyless, the Jacob Joliff Band (of Yonder Mountain String Band), and Friday night mainstage headliners The Wood Brothers. Many in attendance expressed awe and sheer delight over watching The Wood Brothers perform in even more intimate a setting than the mainstage at the Fayetteville Town Center.